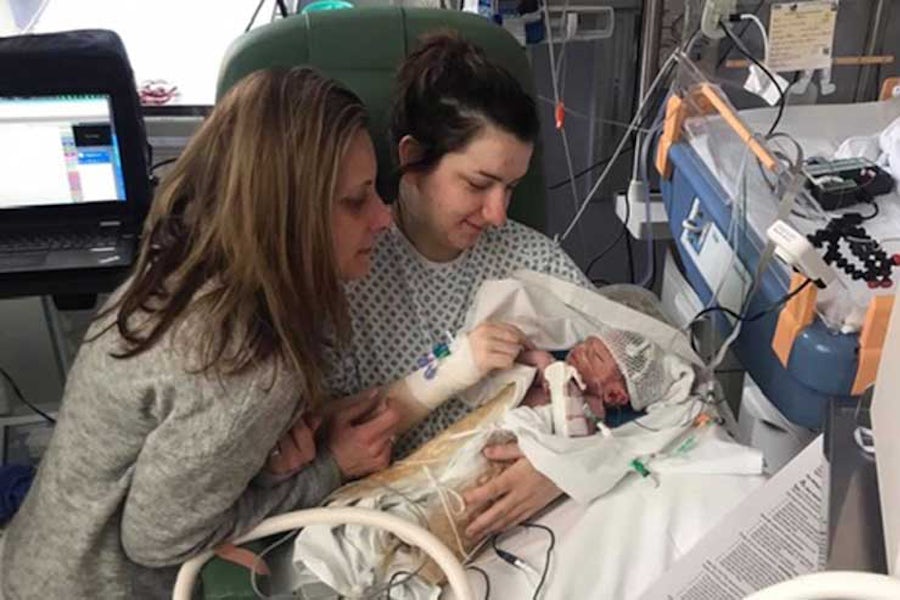 Oscar Parodi with his mother Chelsea and his grandmother Christine Bell in the NICU. (Courtesy of Norfolk and Norwich University Hospital)

A British newborn with a condition caused by oxygen deprivation will become the first infant to ever undergo a cannabis-derived treatment trial, which researchers say could help develop cannabis-derived medicines for use in neonatal care.

“This is the first time a cannabis-derived medicine has been tested intravenously in human babies. It is hoped that it will be good for preventing seizures and protecting the brains of newborn babies with HIE (Neonatal Hypoxic Ischemic Encephalopathy),” said Professor Paul Clarke a consultant neonatologist at Norfolk and Norwich University Hospital (NNUH), where the newborn is being treated.

HIE is a type of brain injury caused by a lack of oxygen to the brain during, before, or immediately after birth. It occurs in 1.5-2.5 of 1,000 live births in developed countries but is far more common in preterm births. According to one study, “40–60% of affected infants die by 2 years of age or have severe disabilities.”

The first baby in the trial, Oscar Parodi, was born with HIE after he was delivered by emergency caesarean section on March 11th at NNUH.

Oscar was given a single intravenous dose of the cannabis-derived medication less than 12 hours after he was born alongside a cooling therapy. The medication in question is a CBD-derived serum with low levels of THC.

Chelsea Parodi, Oscar’s mom said the decision to agree to give her son the medication “was hard but I wanted to do everything I could to help my baby boy.” She added that Oscar “is doing fantastically well and I am really grateful to Dr Clarke and the team for what they have done for us.”

According to The Guardian, the study is examining if cannabis-derived medicine could be a safe and effective weight to reduce the degree of brain injury for babies with HIE,  a brain dysfunction that causes seizures in newborns and occurs when the brain doesn’t receive enough oxygen or blood flow for a period of time.

The clinical trial will involve 32 children who will receive a single dose of the drug or a placebo.

Altogether the trial will take a year to complete and will involve newborns at neonatal intensive care units in the UK, as well as in Spain and Poland, a spokesperson for GW Pharmaceutical, which is funding the trial.

If the current trial is successful, GW hopes to begin a phase II trial in a greater number of patients, Michael Trace, the GW spokesperson added.

Traced stated that the drug “is completely different from Epidiolex,” a cannabis-derived drug also produced by GW, which has been approved by the FDA to treat severe forms of epilepsy.

Trace added that the medicine “is a unique formulation of cannabidiol,” and it “is administered intravenously and has a complex aqueous-based formulation that has been designed especially for this vulnerable patient group.”