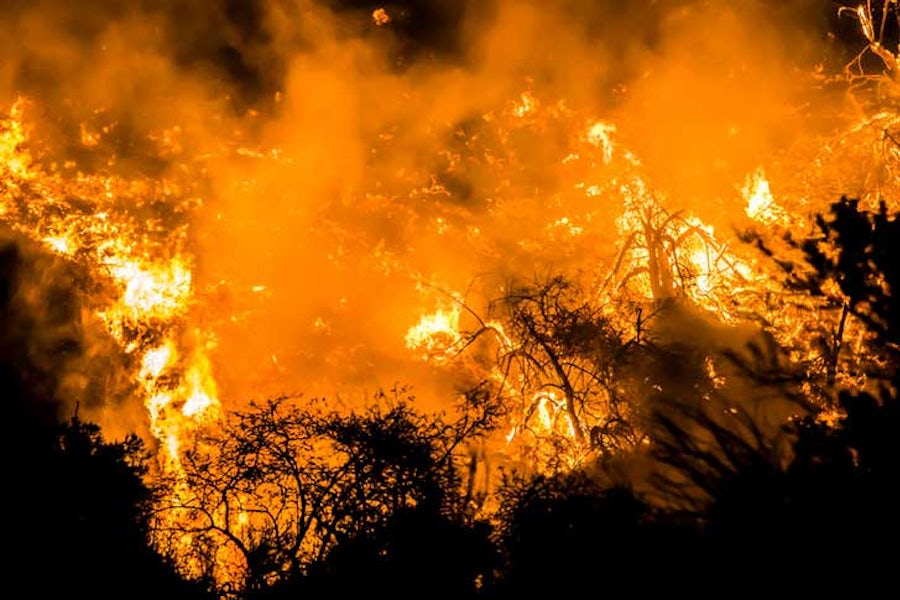 Major wildfires are threatening the lives and livelihoods of cannabis industry workers in California and Oregon, as both states continue to be scorched by the worst US wildfire season on record.

In California, the largest wildland blaze in state history is drawing closer to the famed “Emerald Triangle” cannabis farming region, raising concerns over the safety of the thousands of seasonal workers who take part in the harvest.

Meanwhile in Oregon, an estimated one in five cannabis businesses statewide have been ordered by the Oregon Liquor Control Commission to evacuate their premises, citing the threat posed by fast-moving wildfires in the southern part of the state.

Already this year multiple cannabis farms in California have lost their crops to local wildfires, a situation that is particularly painful for producers as outdoor crops are not necessarily insured. For those whose crops do survive the weeks or months until the fires can be brought under control, even the proximity of wildfire may still result in damages, as soot contamination is challenging to remove without the use of undesirably harsh chemicals and a smoke-tainted flavor may still be left behind.

To date, California’s August Complex fire has blackened around 800,000 acres of land across California and is barely even one-third of the way to being contained. As the blaze continues its push westwards, the August Complex is now on a collision course with the state’s Emerald Triangle cannabis farming region, just as preparations were due to begin for the regional cannabis harvest.

“There are thousands of folks that migrate into Mendocino, Humboldt and Trinity counties every year, and they are not familiar with the territory let alone a massive wildland fire knocking at their door,” state Senator Mike McGuire, who represents the North Coast, said to the Santa Rosa Press Democrat.

The Californian Emerald Triangle is the largest cannabis-producing region in the United States and underpins the state’s multi-billion-dollar legal cannabis industry. The financial effects of wildfire damage in this region could be massive for the west coast cannabis industry, but by far the most concerning aspect for the industry is the potential danger to life.

“People should not be weighing economics with health and safety,” Mendocino County Sheriff Matt Kendall told the Santa Rosa Press Democrat. “We come into this world buck naked with nothing but the love of our parents. There’s nothing material on earth worth losing your life over.”

Kendall reported that cooler weather and minimal winds have helped firefighters to get equipment and personnel to crucial areas, but that people should be still prepared to evacuate if and when the time comes.

Fires continue to devastate in Oregon

Oregon was one of the first US states, right behind Washington and Colorado, to legalize cannabis. As a result, the state’s cannabis sales have come to be a significant revenue generator. Retail sales are continuing to rise year-on-year, from $452.4 million in the first year of legal sales to $725.8 million in 2019. Hemp is also an important cash crop for the region.

Around 62 percent of all Oregon cannabis producers are based in Josephine and Jackson counties, which share a border with California. As serious wildfires continue to break out in the southern Oregon region, evacuation orders have been handed down to 408 cannabis firms (equivalent to around 20 percent of the state’s total licensed cannabis businesses) located in at-risk areas. Of these, 73 are cannabis producers, mostly dealing with outdoor farms.

Nathan Howard, president and co-founder of Josephine county’s East Fork Cultivars, told Marijuana Business Daily that many neighboring farms had already been consumed by the blazes.

“A lot of farms are completely destroyed. A lot of our friends have lost everything down there,” Howard said, adding that he did not yet know if East Form Cultivars had burned down or escaped the flames.

“It’s tough,” Howard told Oregon Live. “I am focusing on us, but I am also wanting to be mindful of people who have lost everything.”

“If the fires do engulf a large amount of the valley, if not all of it, based on what we have seen, it is going to be taking out a lot of multi-generational cannabis farmers and infrastructure.”

Previous Article Dr. Ethan Russo: Cannabis can be better yet Next Article How to grow marijuana in Missouri (legally)
The Cannigma uses cookies to improve your experience and to show you personalized adsACCEPTPrivacy Policy
Manage consent