Home News Synthetic cannabinoids: The good, the bad, and the ugly 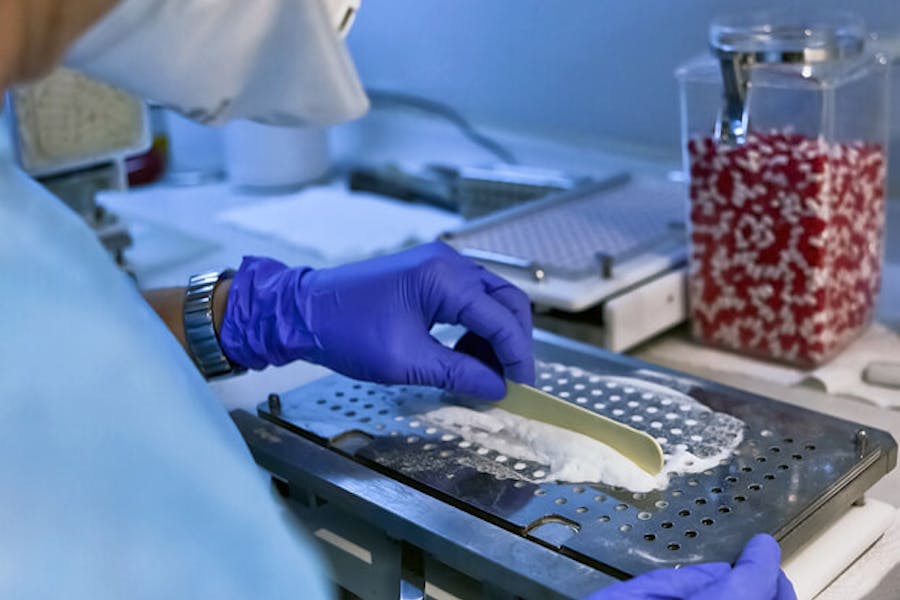 At the same time that cannabis is being studied for its medicinal properties, and widely used as a recreational drug, similar substances to cannabis’ active chemicals are being created in the lab.

These synthetic cannabinoids activate the same components in the body as cannabis — sometimes creating similar effects. Some have even passed through rigorous drug testing to become approved medications for specific medical conditions. Still, other synthetic cannabinoids have not been studied, or worse, show dangerous safety profiles. While high risk and unapproved for human consumption, they are being marketed as designer street drugs — and sometimes causing serious health problems for users. This not only can be a health concern but also can cause confusion and have negative consequences for more studied and researched natural and synthetic cannabis.

Endocannabinoids fit into these endocannabinoid receptors (such as  CB1 or CB2) like a lock and key, and are able to naturally stimulate them to What exactly are synthetic cannabinoids? You may recognize the term ‘cannabinoid’ from cannabis science. This is usually used as a shorthand for the active compounds found in medical marijuana, such as THC or CBD. Technically though, the correct term for cannabinoids that come from the cannabis plant is phyto-cannabinoid while cannabinoid refers to a larger class of active chemicals, which, when absorbed into the human body, are capable of interacting with the body’s endocannabinoid system (ECS).

The ECS plays an important role in the human body, regulating a variety of its key functions such as pain, sleep, memory, hunger, and mood. As it turns out, the ECS actually contains naturally produced endo-cannabinoids, which are similar in many ways to both synthetic cannabinoids and the phyto-cannabinoids in medical marijuana. All three types of cannabinoids share the ability to interact with the endocannabinoid system by activating, blocking, or modifying endocannabinoid receptor activity.

Endocannabinoids fit into these endocannabinoid receptors (such as  CB1 or CB2) like a lock and key, and are able to naturally stimulate them to produce the ECS’s many important effects.  CB1 receptors are largely found in the central nervous system while CB2 receptors are mainly found throughout the immune system. Phyto-cannabinoids like CBD or THC, along with synthetic cannabinoids can also hook into these receptors and can produce a variety of effects.

Importantly, synthetic cannabinoids are different from both phyto and endo-cannabinoids in that they were created in a lab, rather than being created via natural processes in animals or plants.

Most synthetic cannabinoids were developed by researchers trying to create new medicines — and some have made it all the way through drug testing to become approved prescription medications. But others — developed by researchers who were still in early phases of research — have been recreated by purveyors of illegal street drugs and used as “designer drugs.” These types of synthetic cannabinoids differ greatly in their potential uses and risks.

On one side of this synthetic cannabinoid divide, you can find highly developed drugs that were designed to be functional medicine. In particular, there are two synthetic cannabinoid medicines that are currently available as prescription medications in multiple countries — Dronabinol and Nabilone. In the countries where they are legal, both drugs are approved for the treatment of nausea and vomiting associated with cancer chemotherapy, and to treat loss of appetite and weight loss for patients with AIDS.

Designed to mimic the effects of cannabis — without being tied up in the legal restrictions that medical marijuana encounters in most countries — these medicines have passed through the same regulatory process that all prescription drugs have to go through in determining their safety and efficacy. This means rigorous clinical trials to ensure they work well and don’t pose big risks to human health.

Dronabinol, also called by branded names Marinol or Syndros, can cause effects such as increased appetite, reduced nausea, and a euphoric psychoactive high. This makes it very helpful for treating nausea, vomiting and wasting common with chemotherapy treatment, and the loss of appetite experienced by AIDS patients.

In clinical trials, dronabinol was deemed relatively safe but may cause rapid heart rate or low blood pressure, and subjective effects like dose-dependent changes in mood, appetite, cognition, perception, and memory. In these trials, subjects developed a tolerance to dronabinol within 12 days, which often decreased these adverse effects. Still, this tolerance did not lessen the appetite-stimulating effects of the drug.

Dronabinol isn’t legal everywhere. In countries where it is, such as the United States, Canada, South Africa, Australia, New Zealand, and Denmark, it is prescribed by a doctor.

Nabilone, also known by the brand name Cesamet, is able to activate CB1 receptors. Like dronabinol, nabilone is also indicated for nausea, vomiting, and loss of appetite, but nabilone is only approved for cases where other antiemetic treatments have failed. This is mainly because, unlike other antiemetics, it can have psychoactive effects like delusions or delirium.

Most patients in clinical studies experienced at least one side effect to a mild degree. These included drowsiness, vertigo, dry mouth, euphoria, lack of coordination, headache, and concentration difficulties. Importantly this synthetic cannabinoid carries a warning that overdoses could lead to psychotic episodes, including hallucinations, anxiety reactions, respiratory depression, and coma.

Nabilone is also only available in some countries, such as the United States, Canada, Australia, the UK, Ireland, and Denmark.  It requires a doctor’s prescription.

In addition to these two approved synthetic cannabinoid medicines, a third drug called Rimonabant was at one point approved for reducing appetite. Unlike the two synthetic cannabinoids above, which stimulate CB1 receptors, rimonabant works by blocking CB1 activity. This produces the opposite effect, reducing appetite rather than stimulating it. While rimonabant made it all the way to market, as a weight-loss drug, it was eventually pulled for potentially leading to serious mood disorders.

Medications such as dronabinol and nabilone have been approved by regulatory authorities and as a result, are based on clinical studies demonstrating its efficacy. Unfortunately, other forms of cannabis, while often demonstrating similar efficacy, have not had the chance to undergo these trials due to legal restrictions on medical marijuana in general, and therefore have less clinical data behind them.

Many patients still report a preference for natural cannabis products when compared to the synthetic options. This may be because synthetic options primarily aim to replicate the effects of THC — one specific compound in the plant. However, with whole-plant cannabis, THC is not the only chemical present. Instead, we see a blend of many different potentially therapeutic components. In fact, there are over 500 identified chemicals that might be present in any given dose of whole-plant cannabis. These chemicals interact with each other synergistically via the ‘entourage effect’ — the effect in which cannabis’ active chemicals work together to create effects that wouldn’t come from any of their parts individually. While THC is often a primary feature present in this mix, other chemicals in the blend may augment its effects, creating more effective results with fewer side effects than THC (or similar synthetic cannabinoids) alone.

While some synthetic cannabinoids are rigorously tested medicine, there are also synthetic cannabinoids that haven’t passed any tests for human safety and may pose a serious health risk. These are designer street drugs, usually sold as ‘incense’ and marked as ‘not for human consumption’ to avoid legal repercussions. Still, these are clearly intended for use as recreational drugs. These mixes are usually some type of inactive herbal mixture that has been sprayed with synthetic cannabinoids so that when smoked, it will produce psychoactive effects.

Commonly found in smoke shops, these drugs are easily accessible and may carry the label ‘Spice’ or ‘K2’ amongst others. But it is usually unclear exactly which synthetic cannabinoids are present in any of these products. Like other recreational drugs, they are most commonly used by younger people in their 20-30s and more often by men.

Despite their widespread use and accessibility, these drugs have caused a wave of illness and some deaths, so it’s important to know that these drugs may be extremely dangerous and can be unpredictable. You might try one version of ‘Spice’ or ‘K2’ and be fine, but then have serious problems with the next batch, since there is no uniformity in what synthetic cannabinoids are being added to the mix. In fact, these chemicals aren’t always even synthetic cannabinoids, they may also include synthetic opioids or hallucinogens. There have even been cases of rat poison being found in these blends.

The supposed benefit of these Spice blends is that it provides a “legal high” that won’t show up on a drug test, and many believe they are safe since they are readily available. Unfortunately, the assumption of safety is far from accurate. Unlike natural cannabis, where there has never been a case of toxic overdose, synthetic cannabinoids can definitely lead to overdose and possibly even death.

Using these dangerous drugs is like playing a game of Russian roulette. Some might produce negative side effects like nausea and vomiting, aggression or agitation, and rapid heart rate, while others might cause more serious issues like stroke, seizures, kidney failure or death.

The History of Illicit Synthetic Cannabinoids

So how did these dangerous drugs enter the market? Well, it actually started when scientific researchers, such as Professor John Huffman of Clemson University, began synthesizing cannabinoids for medical research. Huffman and other researchers never intended to introduce these drugs without rigorous testing — and some were clearly not well-suited for human consumption. But after the research had been published, law enforcement informed Huffman that the dangerous “Spice” products causing health issues had been sprayed with the exact cannabinoid he had been researching — JWH-018. As it turns out, designer drug makers actually looked through this research when it was published. Without care for public safety, they begin to produce these synthetic cannabinoids. So in 2005, these started to hit the shelves in Europe and spread to other areas from there.

Illicit synthetic cannabinoids are also likely to vary in intensity, with some more mild and others producing much more intense and long-lasting effects than medical marijuana. Effects like anxiety hallucinations, insomnia, and psychotic episodes might last days or even weeks after synthetic cannabinoids use. In addition, the long term psychological effects are much more severe than with cannabis, inducing schizophrenia like symptoms in users.