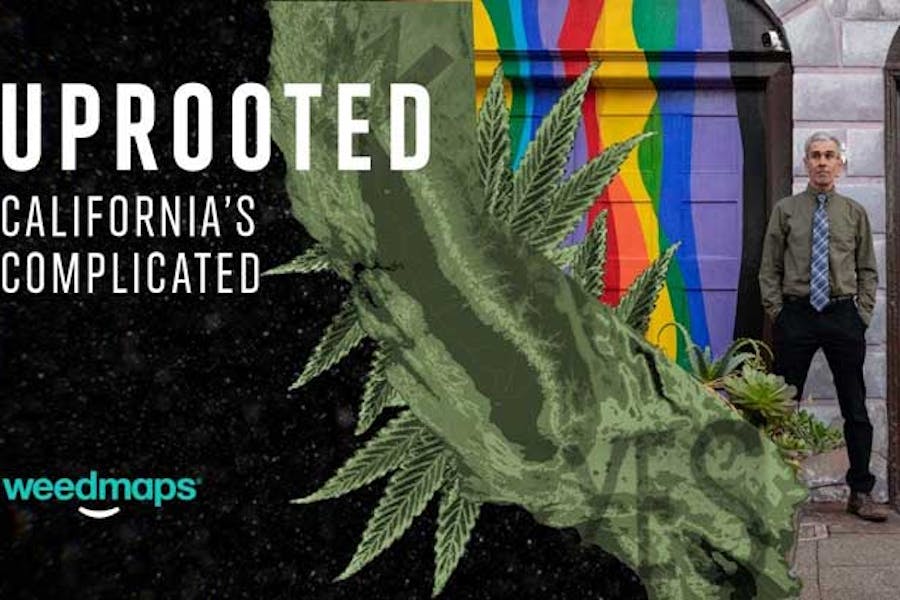 On paper it sounds like a pot smoker’s paradise: hundreds of legal cannabis retail stores spread across America’s most populous state, from Crescent City all the way down to San Diego. The reality though, is a lot more complicated than that, and a new docuseries by Weedmaps seeks to tackle just what has made cannabis legalization in California such a mixed blessing.

The three-part docuseries “Uprooted” looks at the road from Proposition 215 — which legalized medical marijuana in California in 1996 — to the passing of Proposition 64 in 2016, which legalized recreational cannabis and made legal adult-use dispensaries stores a reality in the Golden State.

At the core of the series is a paradox. The cannabis industry is booming, but in California — arguably the world capital of marijuana — 70% of municipalities ban legal cannabis businesses, many medical cannabis patients have found they have less access to cannabis than they did before legalization, and the illegal market is thriving like never before.

In addition, the docuseries looks at how medical cannabis patients in the 80s and 90s paved the way for reform in California and beyond, and how the very same disadvantaged minority communities that suffered the most under the War on Drugs are for the most part left out of the economic windfall of retail cannabis legalization.

In the first episode, “California’s Complicated,” Jerard Johnson, CEO of the cannabis company Trees of Knowledge, describes a game that’s fixed from the get go.

“What no one wants to say is that we’re a market that’s competing with a shadow market that has just as good if not better product than us, for cheaper. How can we survive in that? You can ask anyone with business sense and they’ll tell you you don’t survive that — it’s unsustainable.”

“California’s Complicated” focuses heavily on the regulatory maelstrom facing cannabis entrepreneurs in the Golden State, how legalization has arguably made it harder to run a cannabis business, and to be a medical cannabis patient.

The episode details how for many people back in the 90s, cannabis was organized as a medicine — and not as a profit-based business — with a heavy emphasis on “compassion services,” the donation of marijuana to patients who can’t afford it. With the tax requirements of Prop 64, compassion services were forced to rethink or abandon their operations altogether, leaving many of those same cannabis legalization pioneers unable to access their medicine, the film explains.

Describing compassion orders pre-Prop 64, Jerard Johnson said, “those days are long gone because you have to pay taxes on it and we get taxed on it regardless of how we give it to you.”

These taxes include a 15% state excise tax and a state cultivation tax of $9.25 per ounce of flowers — which suppliers have to pay even if they give it away to patients in need.

Actor and political activist John Entwistle, Jr. stated how after Prop 64 passed, “suddenly the prices go up and the accessibility goes way down. It’s getting harder to get and more expensive.”

In other words, as a non-profit care system has been replaced with a heavily-regulated, for-profit system, countless people have been funneled to the illegal market.

Patients are the main focus of the second episode in the series, “Patients Left Behind.” They were the ones — mainly AIDS and cancer patients — whose treatment stories brought the concept of cannabis as medicine into living rooms across America, paving the way from medical marijuana and eventually adult-use cannabis legalization.

“A 21-year-old person can just go get cannabis now non-medically. That’s legal, but it’s not legal to give cannabis to a terminal patient, so legalization technically made compassion illegal, and compassion is how we got here in the first place,” explained Joe Airone (“Sweetleaf Joe”) the founder and director of the Sweetleaf Collective.

Sean Kiernan, president of Weed for Warriors, which advocates for medical cannabis treatment for veterans, says “it’s people who for the past 30 years have been part of a system. They were told we’d take you out of the system and build a legal market and they have been blocked because they don’t have the ability to get to the legal market.”

The episode concludes with a discussion of Senate Bill 34, which exempts all compassionate cannabis from taxation if it is designated as such at the cultivation level.

Episode 3, “Inadequate and Inequitable,” looks at how disadvantaged communities have been left out of the cannabis boom — and how social equity programs have their work cut out for them in achieving a fairer legal cannabis marketplace.

“Many individuals and operators don’t stand a chance before they even get out the gate,” said Adolph Ward, the owner of Zipp Delivery and a social equity advocate, describing would-be cannabis entrepreneurs who “don’t have any resources, don’t have any access to resources, and the resources that do exist are looking past them”

The problem as it’s laid out entails people from minority and impoverished communities who are less likely to have access to capital, and can’t afford to rent properties while they go through the long, rigorous process of gaining approval to operate. In such a reality, those who were most likely to suffer under the war on drugs are the least likely to be those who profit from the legal cannabis business. Those who do profit tend to be overwhelmingly white and with access to capital.

“It’s ultimately a learning curve for the average operator to understand what the state and the city are looking for in regards to how you operate your business and what you have to pay to operate your business. It’s completely turned into a pay-to-play scenario,” Adolph Ward is quoted as saying.

Jerard Johnson described 15-18 hour days, plus hours each week to research and stay ahead of regulation, and that’s just to get a cannabis delivery license. “If you don’t have at this point $70,000 liquid you don’t want to get involved, and that’s being generous about it.”

According to Cedric Haynes, director of public policy and partnerships at Weedmaps, social equity programs “should be the great promise of cannabis legalization,” adding that these policies “must ensure that those whose lives have been marginalized by cannabis prohibition have equitable opportunities in cannabis marketplaces.”

What was the inspiration behind “Uprooted?” According to Rebecca Larzik, director of brand at Weedmaps said, “Our goal with this film project is to put a human face on the industry and on its history, and remind everyone that policy issues directly impact the lives and livelihoods of thousands of people.”

Larzik added that “today, more than 70% of California municipalities prohibit cannabis business, and the people who should be first in line for business opportunities in this industry are too often told to wait somewhere else. That’s not what legalization should look like.”

She also said that Weedmaps sought to show “all the work it took by a lot of people to get to the point where we could go into a dispensary and purchase cannabis. The industry was built by people who have been disenfranchised by the War on Drugs, many of whom are still incarcerated and unable to take part in the very system they supported.”

As a documentary, the film lacks the sort of sweeping scale and scope of a 12-episode Netflix documentary series, and it eschews the personality-focused style of documentaries that follow a single subject and lets you into their life as a microcosm of a wider societal story.

That said, it does highlight some very interesting people in cannabis in California, such as Sweetleaf Joe, a veteran of the cannabis scene who has been involved throughout the journey from Prop 215 to Prop 64.

There is also Kika Keith, a young Black mother who is a social equity applicant and the founder of the advocacy group Life Development Group. In the docuseries, Keith stands inside a storefront on Crenshaw Avenue in south Los Angeles that she’s been holding on to for two years as she awaits approval for her cannabis storefront.

Keith said the storefront is in the heart of the neighborhood where she raised her daughters and “walked down the street to visit my grandfather at the mall where he was working,” describing the dream of a local resident to own their very own neighborhood cannabis store — no matter the odds they’re up against.

Overall, the selection of interview subjects is quite inclusive, and highlights many Black and female cannabis industry owners, entrepreneurs, and experts who are given the floor to speak about their experiences.

Mainly, Uprooted does an effective job at showing those outside of the cannabis business in California—- and those looking to join it — just how complicated legalization is in the state. The fact that the overwhelming majority of the state does not have access to legal dispensaries and unlicensed businesses still outnumber licensed businesses by a wide margin shows that legalization does not change the reality of cannabis overnight.

Previous Article 8 of the coolest hemp inventions Next Article New study: No link between cannabis and cognitive decline in seniors
The Cannigma uses cookies to improve your experience and to show you personalized adsACCEPTPrivacy Policy
Manage consent