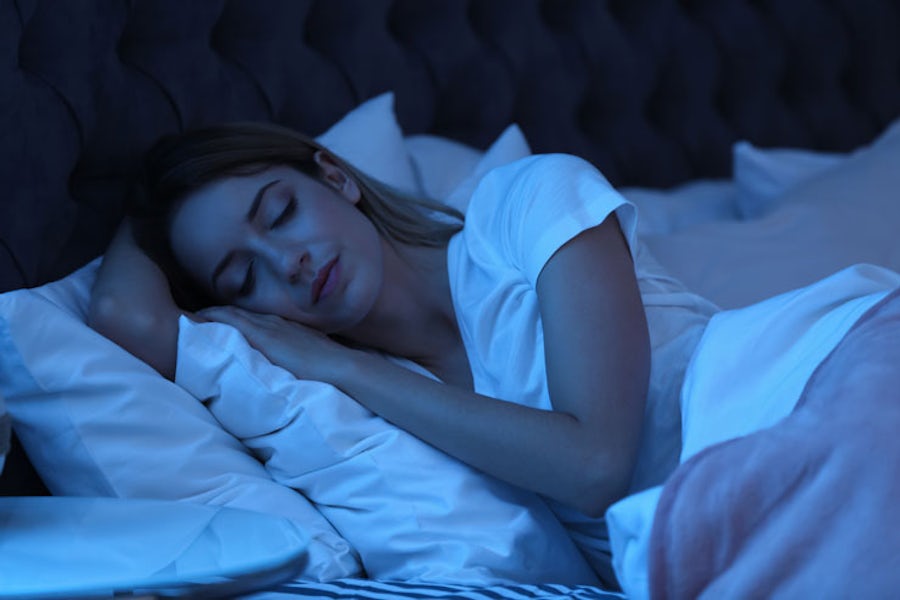 A woman sleeping in bed (Belchonock/123rf)

While we sleep, our minds become fields of dreams. Usually, these dreams are benign; some fall under the category of harmless yet bizarre, and some are downright pleasant. At times dreams are difficult to recall.

While some may blame those strange dreams on things like worries, last night’s pizza with extra red pepper flakes and anchovies, or that sleep aid for their lack of dreams, these aren’t the only kinds of things that influence our nocturnal adventures.

Cannabis can also affect our sleep — and our dreams.

Most research points to cannabis affecting dreams in two ways: directly and positively, by suppressing dreams. Or indirectly and negatively, as many regular users find that suddenly stopping their consumption results in strange, vivid dreams, or even nightmares.

The way cannabis directly affects dreams is by suppressing the REM stage of sleep, where most dreaming occurs, thus preventing many dreams from ever taking shape.

How this happens depends upon many variables, not the least of which are things like the specific cannabinoids, terpenes, and other constituents of the cannabis plant you consume, and how much of each is present. Method of ingestion, dosage, and individual body chemistry all come into play as well.

To understand how cannabis may affect dreaming, we first need to have a basic understanding of sleep itself, or more specifically, the four stages of sleep that we go through when we doze off each evening, including the following:

Despite their numbering system, these stages don’t all progress in sequence as one might imagine. Instead, they move through stages one, two, and three, then repeat stage two before hopping straight to stage four, where most of the business of dreaming takes place. Then, the cycle begins all over again and continues, to the tune of four to five cycles throughout the night.

To sleep, perchance to scream

While most dreams could be classified as neutral, pleasant, or merely strange, sometimes the dream landscape becomes more akin to a minefield, with horrifying dreams seemingly popping up out of nowhere, often sending us to the brink of death before erupting into that something – whatever it is – that jolts us awake in a surge of terror.

Nightmares can happen to anyone, for a variety of reasons. Stress, anxiety, exhaustion, or a disruption in sleep routine can trigger nightmares, as can many drugs. In addition to Prazosin, antidepressants and some medication given for Parkinson’s disease may cause these unwelcome horror movies to run rampant in our minds, as can some medical conditions and mental health disorders.

It’s estimated that 2-8% of people have nightmares often enough to cause sleep problems, and up to 50% of young children have nightmares that send them running to their parent’s rooms or crying loud enough to awaken them.

Nightmares are extremely common for those suffering from Post-Traumatic Stress Disorder, or PTSD. It’s estimated that up to 72% of PTSD patients experience nightmares in which the trauma that caused the PTSD is played out over and over again, causing them to constantly relive the event.

There is some evidence that cannabis helps treat PTSD patients suffering from persistent nightmares. In one study, researchers reviewed the charts of 47 PTSD patients with continued nightmares that were unrelieved with the use of conventional antidepressants and hypnotics.

With the conventional treatments unsuccessful, the patients were then given nabilone, a synthetic form of THC. For 72 percent of these patients, their nightmares were significantly reduced or stopped altogether. And some patients experienced more sleep and better quality of sleep, as well as reduced night sweats and daytime flashbacks.

Another study done on 104 prison inmates described as having “serious mental illness” showed significant improvement in PTSD symptoms such as nightmares and insomnia, plus improvements in chronic pain. The study also noted that medications with the potential for adverse effects – mostly antipsychotics and sedative/hypnotics – were often discontinued once the inmates were given nabilone.

Yet another study found cannabis use led to statistically significant improvements in sleep quality, frequency of nightmares, and PTSD hyper-arousal symptoms.

It’s hard to say if CBD causes unusual dreams, as no known studies have been done in that respect. Information on whether it does would be subjective and anecdotal. However, as with THC, there have been studies done on CBD’s effects on dream suppression and even a potentially dangerous sleep disorder called REM behavioral disorder, or RBD.

In the first of hopefully many studies to determine the benefit of CBD for patients with PTSD, 11 patients at an outpatient psychiatry clinic were given CBD in addition to their regular care, for eight weeks. At the end of the eight weeks, PTSD severity had decreased in 91 percent of the patients, and CBD also brought relief to a subset of patients who were suffering from frequent nightmares. Researchers also noted that the CBD was well-tolerated.

In a review of studies done between 1972 and 1981, researchers found that the subjects with insomnia who were given CBD reported significantly more sleep than those who were given a placebo, along with much less dream recall.

The results of these studies may be especially good news for the parents of children with sleep disorders, as most parents eschew the idea of giving THC to their little ones.

Finally, a small study using CBD was done with patients suffering from Parkinson’s disease and REM behavioral disorder. RBD is a serious sleep disorder that occurs during REM sleep. With RBD, the muscles that would normally be temporarily paralyzed during REM sleep, are not, leaving the patients to “act out” their dreams, sometimes dramatically and even violently.

After being given CBD, the patients in the study had an immediate and significant drop in the frequency of RBD events during their REM sleep, and with no reported side effects.

What to know before you try it

Although CBD appears to be generally safe for most people, be aware that it can interact with certain drugs, so check with your health care provider before embarking on your CBD sleep journey. Of course, the same goes for THC: seeing a cannabis-literate doctor who can advise you would be invaluable. And whether using THC or CBD, the adage, “Start low and go slow” is some of the best advice you can heed.

Previous Article Five women in the cannabis industry to keep on your radar Next Article Cannabis and coronavirus: Tips and myths
The Cannigma uses cookies to improve your experience and to show you personalized adsACCEPTPrivacy Policy
Manage consent