How to make the most of cannabis concentrates 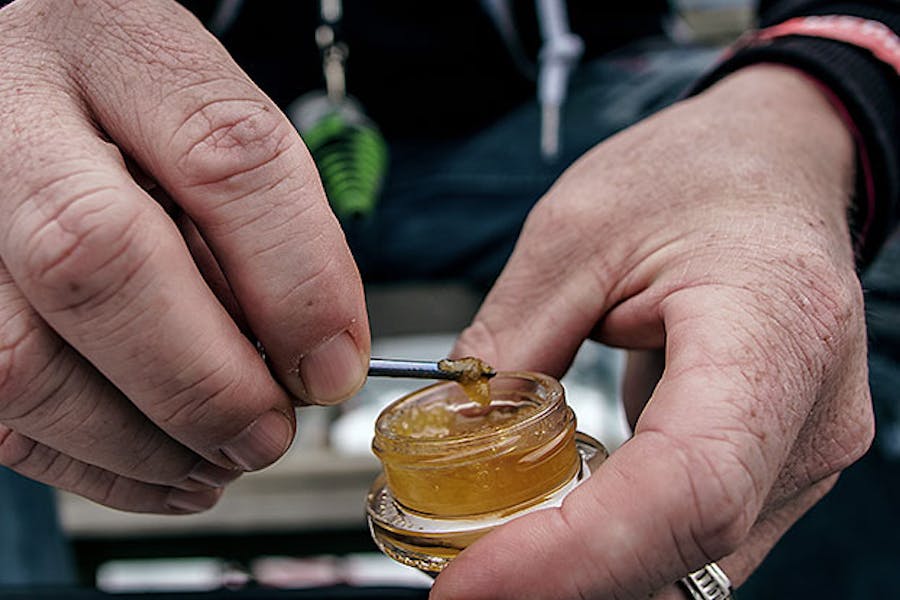 Cannabis concentrates come in all shapes and sizes. There’s shatter, dabs and waxes, distillates and isolates, rosins and oils…and more! As the cannabis industry evolves and extraction technology progresses, the number of different concentrates out there has exponentially blossomed.

It’s kind of similar to what happened slightly earlier in the history of marijuana with cannabis cultivars (more often referred to as ‘strains’). Decades ago, a handful of select strains comprised the vast majority of the market, but all that’s changed today. The hard work of countless growers has resulted in a cannabis scene that’s at once beautiful and complex…very complex.

In the same way, a constant push towards purer, clearer, stronger concentrates has resulted in all sorts of offshoots. Before we get any further into some of these types of concentrates, though, let’s first look at the term itself.

A product derived from cannabis’ most resinous parts (i.e. its flowers) that is then processed into a more concentrated form.

While it is true that cannabis concentrates are evolving in complexity (and intensity), keep in mind that they’re not entirely a modern invention. For example, a type of concentrated plant resin called hashish has been used since ancient times. It’s likely responsible for the ultra-high THC levels that researchers have found within the bodies of Egyptian mummies.

Perhaps it’s not surprising that a dutch voyager had this to say after seeing Egyptian hashish in action: “Hempe excessively filleth the head.”

Hashish was popular in India and other areas of the East, too. Hashish was often literally collected off of farm laborers and partaken of ceremonially. In the Muslim world, cannabis was almost always eaten in concentrated form — smoking the plant didn’t become especially popular until the 1500s.

By the late 1800s, hashish had made its way to Europe, where it quickly became en vogue in literary and artistic circles. Dr. Jacques-Joseph Moreau even began the “Club des Hashischins” (Club of The Hashish Eaters) in order to study — and enjoy — the effects of cannabis in experiential ways. Attracting brilliant minds from all over the world, Dr. Moreaur’s club can be thanked for its colorful contributions to 19th-century French culture.

After all, it was only when carried along by the upliftment of cannabis concentrates that influential Hashischin poets like Arthur Rimbaud penned their best work. It turns out that the history of marijuana is actually full of creative endeavors!

As time moved forward into the 20th century, concentrates began to evolve. Hashish and kief (a dusty powder of cannabis trichomes) were placed into alcohol bases to produce crude cannabis tinctures; it was these powerful tinctures that once graced the shelves of old-time pharmacies and Doctor’s offices. Society had come to understand that cannabis worked…though it was still in the process of discovering how.

Shortly after this turn of the century boom, cannabis would be banned. But its future resurgence would be even better — and even more diverse…

Beginning in the ’70s, marijuana concentrates began an amazing evolution into what they are now. Today there are two main types of concentrates: extracts and solventless concentrates. Let’s take a closer look!

Extracts: These are concentrates that have been chemically extracted from cannabis flower. To do this a solvent is used, and different solvents yield slightly different concentrates. For example, extracting with natural CO₂ (carbon dioxide) yields a concentrate that’s pure but not especially nutrient-diverse.

Extracting with an alcohol like ethanol, on the other hand, produces potent extracts that contain a greater percentage of the ‘active ingredients’ in cannabis, but also need to be purified to remove any residual solvents. This purification process often entails using a vacuum oven to pull residuals out of the extract, but unfortunately, it can pull terpenes out too.

Other popular solvents include butane, hexane, and other hydrocarbons. Though effective at ‘pulling’ cannabinoids out of flower material, these methods are volatile, and the concentrates they produce may lead to risk of dependency. A concentrate made with them will need to be placed into a vacuum oven, winterized, and extensively lab tested before being given to consumers.

An extract’s consistency will vary with its purity levels. If an extract is waxy, it’s often because some residual solvents are still trapped within it, though natural plant waxes could also be to blame. Winterization (separating out impurities with cold) and/or distillation (separating out impurities with fractionation) can both help purify crude extracts. Highly pure extracts will be dense — or even totally crystalline — in nature. Pure cannabinoids, after all, are whitish crystals.

Solventless Concentrates: These concentrates are produced, as you might expect, without being acted on by a chemical solvent. Instead, mechanical action is used to pull (or push) cannabinoids out of cannabis flower. While less efficient than solvent-based extraction, solventless concentrates may have one major advantage: their purity.

In the case of historical solventless varieties like hashish—now simply called “hash” in English—, repetitive handling of cannabis is what slowly breaks more and more cannabinoid-rich trichomes off the plant. Trichomes are microscopic, hair-like outgrowths found on the surfaces of cannabis and other plants.

Once they collect, these trichomes often have a dusty consistency that does well to be pressed into pucks. While tradition hashish production is very simple, it’s also very time-consuming.

Thankfully the modern cannabis industry has found many ways to speed this process up. The most popular way? Through using high pressure, which yields a type of concentrate that’s called rosin. To produce rosin, cannabis flowers (or occasionally other cannabis extracts) are placed between the plates of a large, gently heated press before proceeding to squeeze out its fat-solubles at as much as 1,000 PSI.

You’ve Got a Concentrate…Now What?

Depending on your medical needs and health goals, you may opt to take concentrates differently. According to Dr. Bob Melamede, people with severe diseases like cancer or autoimmune disorders may do best ingesting an unaltered concentrate frequently throughout the day. Rick Simpson Oil, or RSO, is often useful in these cases.

RSO is a cannabis concentrate that’s traditionally made with highly selective Naptha as its solvent; it often contains a diverse blend of cannabinoids and terpenes. Plus it can be used both topically and internally.

If left alone for long enough certain oils will separate themselves off into different fractions. It’s almost like a natural purification process; crystalline cannabinoids called “diamonds” can split themselves away from the more viscous component (which is called “sauce”) of its resident oil.

One of the most popular types of cannabis oil is called hash oil, or honey oil. In a sense, honey oil is purified twice: it begins with concentrated hash before then being refined again. Sometimes this hash is extracted, other times it’s rosin pressed; regardless, the final product is potent and pure, high in both cannabinoids and terpenes.

CBD Oil: Not Quite a Concentrate, But Still Helpful

Concentrates can be diluted, too, for those without serious health concerns or aspirations of recreational use. Just look at the resurgence of popularity that CBD oil has seen! Most people don’t realize it, but CBD oil is often only a few percentage points CBD by volume. In other words, it probably started with a CO₂ derived, CBD-rich concentrate and was then heavily diluted with a carrier oil.

This same dilution process can be done with any type of cannabis concentrate depending on your health and wellness goals. After all, many people don’t need to take huge amounts of cannabis each day. This sort of oil makes microdosing — and slowly titrating up in dose — much easier.

Overall, marijuana concentrates have some distinctive advantages over less refined products. The most obvious one is that you don’t have to smoke them (though you can), so ingestion spares the lungs. Many concentrates are easily added to vape pens, making them the perfect candidate for vaping, too.

Another potential benefit of concentrates: diversity. In other words, it’s unlikely that retail-available concentrates were made from a completely uniform plant phenotype. There’s likely some variance within each harvest from plant to plant, and these small differences in terpene and cannabinoid profiles find their way into each extraction — and therefore into each concentrate. In this case, less standardization and more biodiversity is a good thing.

Overall, cannabis concentrates may help your body take full advantage of how cannabis works by placing its most active components into a form that’s both powerful and convenient. There’s a reason they’ve been used throughout history, and there’s a reason they continue to grow in popularity up until this day.

Previous Article Decarboxylation: How to activate cannabis/THC Next Article How does cannabis impact sex? Here’s what the science says
The Cannigma uses cookies to improve your experience and to show you personalized adsACCEPTPrivacy Policy
Manage consent