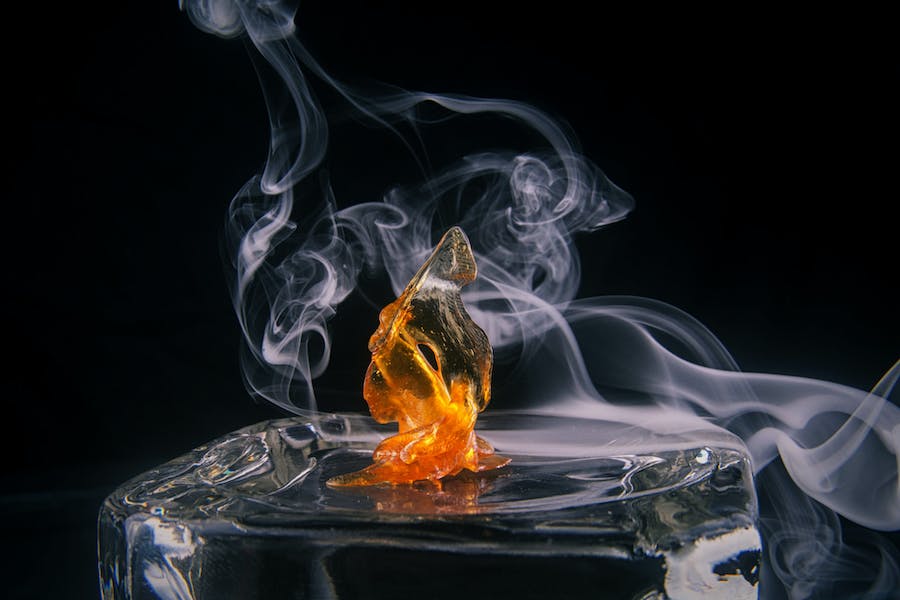 Maybe they sound like a mid-90s R&B trio or the mascots for a breakfast cereal, but badder, budder, and shatter are actually three types of cannabis concentrate that are all the rage these days. Highly potent and very effective, what exactly sets them apart?

What are cannabis concentrates?

Cannabis concentrates are products that are made by extracting the active ingredients, primarily cannabinoids and terpenes, from the plant. Concentrating a compound allows for increased potency, which is why these products have more overall THC than cannabis flower.

The most famous and historically relevant cannabis concentrate is hashish, which is made by removing the kief ( trichomes or resin glands) from the plant and pressing and processing it into bricks, sticks, and balls to be used for smoking or cooking.

Many concentrates are made by using a solvent (like CO2 or butane) to extract the cannabinoids and terpenes, while others like hash or rosin are solventless, and are often preferred by consumers for that very reason.

Oils that are extracted using butane are referred to as butane hash oils (this includes badder, budder, and shatter, if butane is used), though the processing of the concentration and the resulting consistency can differ from one type to the next.

One thing all extracts have in common is their potency – they’re strong, often very strong, and THC percentages that range from 50 to the mid 90’s. This applies to budder, batter, and shatter, all of which are very similar – except when it comes to their consistency.1

As the name suggests, budder is a cannabis concentrate that has a similar creamy look and feel to butter. And while the name sounds similar, budder has no relation to cannabis butter, and should not be used as a substitute (and if it wasn’t obvious, the inverse is also true – you shouldn’t try to dab or smoke cannabis butter).

The creation of budder is often credited to a Canadian man named the BudderKing, who was quoted in 2005 as saying “I make something called ‘Budder,’ and it’s the strongest, cleanest, stoniest stuff in the world.”

He added that “I see Budder as a spiritual THC high and a harm reduction method. One Budder hit gives you two joints worth of cannabinoids all at once, and it’s kind to your lungs.”

Badder is very similar to budder, but it has a consistency that isn’t quite the same. It is often described as being closer to cake frosting or batter, but at times can be sticky and runny, like the concentrate sauce. It can also have a bumpy texture, like the dry, crumbly concentrate called (you guessed it) crumble.

In the case of both budder and batter, the consistency determines the final product. While both are what are known as “wax concentrates,” badders, unlike budders, are whipped to give the desired consistency. Whipping concentrates happens post extraction. This process can also be done to shatter or rosin, resulting in a badder like consistency. With all that said, many people and companies used budder and badder interchangeably. The consistency between these two types of extracts is reasonably similar.

Shatter is a highly-potent concentrate that somewhat resembles light, polished amber. This translucent concentrate can have multiple consistencies. It can be malleable, sappy, or brittle, which can also be referred to as “snap n’ pull.” Similar to glass, brittle shatter can shatter like glass when broken. When any heat is added, shatter becomes sap like and difficult to handle. It can have a golden or amber shade, or more closely resemble cooking oil. But contrary to popular belief, the fact that shatter is translucent does not mean it is more potent.

Like badder and budder, shatter is typically made by using solvents like butane  or ethanol to extract the cannabinoids from the flower. After extraction, the solvent needs to be purged from the extract for safety reasons. If making butane shatter, the extract is placed under vacuum post extraction.

If making shatter using ethanol, the extract can go through a “winterization” process to remove some ethanol as well as lipids and other undesirable plant compounds. This shatter is then placed under vacuum to remove the remaining solvent and obtain the desired consistency. Vacuum ovens are commonly used in the industry. Depending on one’s purging process or use of winterization, terpenes could be lost during these steps. Generally the more refined a concentrate is, the lower the terpene content.

What do budder, badder and shatter have in common?

One thing that every cannabis concentrate has in common is potency. Even the most rudimentary, low-grade hashish can have THC levels that are significantly higher than cannabis flower.

All concentrates are processed forms of cannabis which, in varying degrees, lose some of the cannabinoids and terpenes during the extraction and post-processing. preparation.

Cannabis concentrates of all forms are subject to different regulations than non-processed cannabis flower. In legal cannabis states, the amount of concentrate that is legally permitted under the law is typically much lower than that of cannabis flower, due to the very high THCA or THC potency.

Also, due to the use of solvents like butane, preparing these extracts at home can be highly dangerous, and even fatal in some circumstances. You’re better off leaving it to the professionals.

How to consume concentrates

The most common way to consume badder, budder, or shatter is by dabbing, which allows for a truly unique, potent experience. Dabbing is best done at temperatures between 350-500 oF. Temperatures exceeding 322 oC (611 oF) can result in harmful terpene degradants. Higher temperatures also can lead to a harsher, less flavorful hit.  Typically dabs are taken using a dab rig, which can now be electronic. Hand-held pens or vaporizers are also available. These pens can be loadable concentrate-only or 2-1 dry herb and concentrate vaporizers. Formulated cartridges are another way to consume concentrates. These cartridges either screw or pop into a battery and are ready to be consumed.  Many dry herb vaporizers also come with attachments that can be added to the vape to accommodate concentrates, cutting out the need for a dab rig.

Concentrates can also be broken down and sprinkled on top of a bowl or added into a joint. Depending on the consistency though, this may be much easier with a batter or budder, due to its consistency. Shatter tends to be stickier creating more of a challenge when putting the concentrate onto the flower. It is easiest with an isolate, or sand, which is an extract with THC potency in the upper 90s and a sand like consistency.

Concentrates can also be used to make edibles, though they will still need to be decarboxylated just like cannabis flower.

How to store concentrates

Keeping your cannabis stored properly can prolong its shelf life and ensure it stays fresher and at its maximum potency for as long as possible. With concentrates, the same principles for storing flower apply – keep them stored in a cool, dark, and dry place away from direct light and/or heat. You’ll also want to make sure that the concentrates and the container they’re kept in are as free of moisture as possible. Avoid any excess heat to the concentrates, as this will expedite their degradation

For short term storage, wrap shatter in parchment paper and place inside a sealed back or container. With batter and budder, an airtight glass is the best option, followed by silicone. If you’re looking to keep your concentrates fresh for an extended period of time, then consider keeping the concentrate in the refrigerator or freezer in an airtight container.

Proper storage also depends largely on the consistency of the concentrate. Shatter for instance, can stick to the inside of glass jars, while badder and budder should be easy to scoop out.

Which is better – shatter, budder, or batter?

It is also largely a matter of taste. Some users may find the consistency of shatter to be unwieldy and the malleable nature of wax concentrates easier to deal with, while others may find the opposite to be true.