Home Delivery THC syrup: What is it and what can you use it for?

Home / Delivery / THC syrup: What is it and what can you use it for? 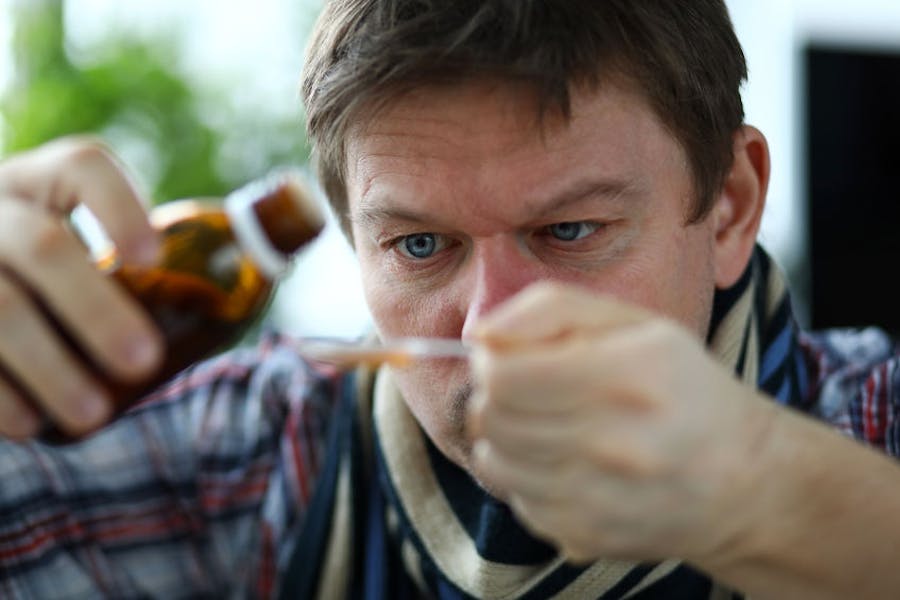 A man measures out syrup in a spoon (Alexander Korzh/123rf)

For generations in every corner of the Earth, countless elixirs have come in the form of a syrup that goes down easy and provides relief from what ails you, a powerful high, and oftentimes both. The same principle applies to THC syrup, a unique and potent way of ingesting cannabis that you may have heard of lately.

But what is THC syrup? First off, let’s look at what it isn’t.

THC syrup is not ‘lean’

Lean, Barre, Purple Drank, Sizzurp, Texas Tea. Call it what you want, but Codeine and promethazine cough syrup has for the past 20 years or so been popular across the United States — and before that in the South — and arguably the most mentioned drug in hip hop.

With its roots in the blues clubs of Houston in the 1960s, drinking lean (often mixed in a styrofoam cup with Sprite and Jolly Ranchers) creates a powerfully intoxicating, euphoric effect that can slow down the whole world and have you sitting sideways, with your speech slurred and your whole body leaned over (hence the name). It has featured in the sound of countless hip hop artists, and has been linked to the untimely deaths of some of those same musicians.

THC syrup is nothing on that same level of intoxication — or danger. It does not contain any opiates whatsoever, but some caution should be exercised (like any edible, you’ll want to start slow, with a small dose the first time.) It also is not related to THC lean, which is just codeine and promethazine syrup infused with THC.

So, what exactly is THC syrup?

This liquid marijuana (not to be confused with the cocktail) is made by infusing vegetable glycerine with cannabis concentrate or oil and adding sugar or other sweeteners during preparation. Recipes abound on the internet for THC syrup, and many of them vow to create a syrup that mimics the viscosity and sugary sweetness of cough syrups, just without that medicine flavor. It can also be purchased at dispensaries in legal cannabis jurisdictions, though it can be expensive and hard to find.

Unless you added any antihistamines and the like (which you shouldn’t), don’t expect any of those sorts of medicinal effects, though.

What can you use THC syrup for?

You already have several grams of premium flour, some THC gummies, and a pipe or some papers within arms reach, why bother with THC syrup?

THC syrup is popular with users because it has all the same effects as marijuana edibles, but with an onset that users say can be far quicker. While a hash brownie or a THC gummy can take well over an hour to kick in, the internet is abound with people swearing you can feel the effects of THC syrup in around a half hour or so, possibly even sooner, although there is no scientific evidence of rapid onset.

Like any edible or oral method of taking cannabis, one might choose to use THC syrup as an alternative to smoking or simply because it is more discrete.

Why did it become so popular?

There are a number of reasons one can understand the popularity of THC syrup. Namely, it can produce the full-body intoxicating high of edibles.

But it also appears that cannabis syrup and the industry behind it may somewhat be piggybacking on the popularity of lean in hip hop and pop culture as a whole.

At least one manufacturer puts “lean” directly in the title of the product, while another company, Cannavis, prominently features in its main homepage a photograph of a young African-American man in a red NY Yankees fitted pouring THC syrup (tropical punch flavor) into a soft drink bottle, almost as if he was mixing up some purple Sprite. Cannavis also states in its about page that THC syrup is “typically mixed with a beverage.” (The company did not reply to an email inquiring about its marketing approach)

The marketing of weed syrup — especially when it’s called “lean” — appears to be at the least a sort of way to appeal to those interested in the look and vibe of lean without the risks or high price.

How THC syrup is different than smoking

Edibles in general are popular because they produce a high that is far different than that of smoking or vaping. When cannabis is smoked, the THC enters the bloodstream almost immediately, producing a very rapid onset of the high. With edibles, THC must first travel through the digestive tract to the liver, where it is metabolized into 11-hydroxy-THC. This is not the only reason why edibles take longer to kick in, but it’s why they produce a different high than smoking.

Studies have shown that 11-hydroxy-THC is stronger than THC, and anyone who has taken edibles (especially a large dose) can tell you that the high lasts longer and can be more intense, producing both a strong body high and a powerful cerebral effect.

If mixed into a soft drink, THC syrup can create a cannabis beverage of sorts, though THC syrup is very different in terms of consistency. Cannabis beverages involve emulsifying THC directly into beverages (like fruit juices or soft drinks). And while the technology has improved in recent years, the consistency can be rather hit or miss, and it has even been likened to spoiled milk because chunks or lumps will sometimes appear in the beverage.

Cannabis beverages can also have a long onset time like standard edibles — well over an hour — though this has begun to improve as the industry has invested more time and effort (read: money and research) into producing rapid onset beverages.

First things first, THC syrup is not dangerous in the same way that lean is. However, like with lean, it’s relatively easy to take too much if you’ve poured the bottle into a soft drink, which makes it more palatable and easier to ingest. Like any cannabis products, unwanted side effects can occur with too high a dose.

Another potential problem is if you’ve mixed your liquid cannabis with alcohol, such as a hard liquor. This can create a highly-intoxicating, slowed down effect that could actually resemble some of the sensation of lean. Mixing THC syrup with liquor could make one feel sick to their stomach or produce a high that is too strong and incapacitating.

According to Tal Lupo, a product developer in the Israeli cannabis industry, some forms of THC syrups may seem new they “actually resemble century old cannabis tinctures that were given at pharmacies.”

But using novel micro and nano-emulsification processes, Lupo said, may create a “novel cannabinoid pharmacology profile that leads to a different user sensorial experience. More pharmacological research is needed so we can learn about cannabis beverages’ metabolism and predict the onset, strength, and length of the effect.”

He added that mixing THC syrup with alcohol “can really produce severe adverse effects,” and referenced a study from 2013 that asserted that “Simultaneous alcohol and marijuana (SAM) use raises significant concern due to the potential for additive or interactive psychopharmacological effects.”

The bottom line with weed syrup? Don’t mix it with hard alcohol and start with a low dose until you figure out what’s right for you.