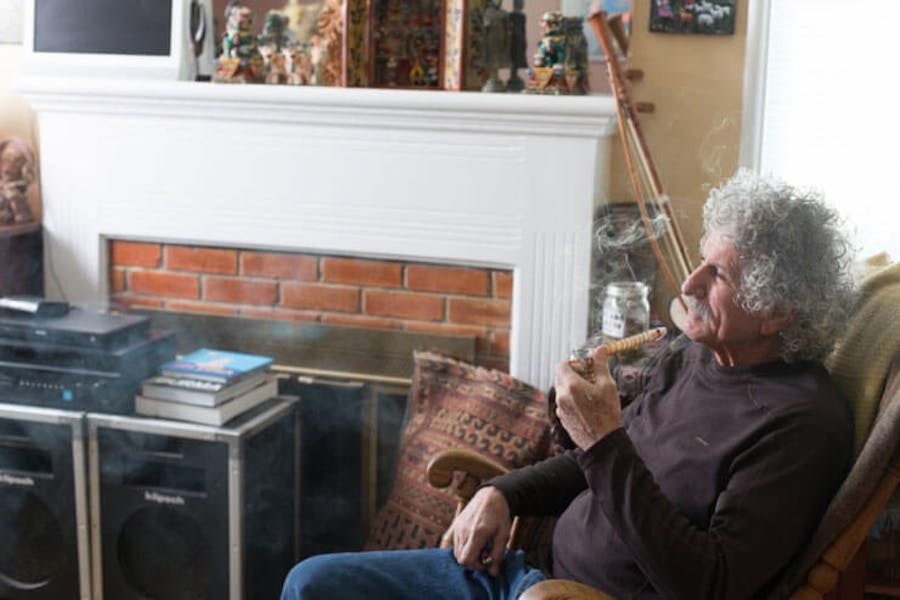 Heidi Klyn is describing a baking workshop for seniors that took place at her house in the over-55 community where she lives in Kenwood, California. Mind you, this was no ordinary cooking class.

“We baked brownies,” she says, lowering her voice conspiratorially. “You know, magic brownies.” She laughs, flashing a youthful grin. “Everyone loved them.”

Klyn, a gregarious, pink-haired woman-of-a-certain-age leads the Oakmont Cannabis Club, conceived in 2018 as an educational support group for seniors who want to use cannabis, whether medicinally, recreationally, or both. Currently there are more than 240 club members with an age range of 55 to 97. Most of the seniors in the club are cannabis newbies, or are returning to the plant after a hiatus of many years.

Now that cannabis has found its way into the mainstream in the United States, with endorsements from people like Dr. Sanjay Gupta, more older Americans are taking tentative steps into the wide world of weed, lured by the promise of better health. Well into his golden years, Willie Nelson credits marijuana with keeping him off booze and cigarettes.

“I wouldn’t be alive,” he said in a recent interview in Rolling Stone.  “It saved my life, really. I wouldn’t have lived 85 years if I’d have kept drinking and smoking like I was when I was 30, 40 years old.”

These days, it’s not just old hippies who are medicating with marijuana. According to the 2018 National Poll on Aging, 70% of American seniors said they would consider asking their health practitioners about treating a health condition with cannabis. A study published this week in JAMA Internal Medicine showed that cannabis use among Americans 65 and older has increased a whopping 75% in the past three years.

The Oakmont Cannabis Club members are eager to learn all they can. They show up to monthly meetings to hear guest speakers like Martin Lee of the non-profit Project CBD and to get help choosing products and strains for specific conditions.

They learn about dosing, and whether to use CBD-rich cannabis or throw a little THC into the mix. They take field trips to local dispensaries (“Their eyes get wide,” Klyn says. “I think people expect a shack in the woods.”) They get together and bake marijuana brownies. Most of all, these seniors are finding profound health benefits from the once-maligned plant.

“Cannabis makes a real difference in our club members’ lives,” Klyn says. “We have members who depend on it to function every day.”

Aging isn’t for the faint of heart

Aging is not for sissies, no siree. As we age, our various parts are shrinking, hardening, weakening, becoming less efficient and elastic and more prone to illnesses, injuries and the dreaded “aches and pains” commonly experienced by older folks. Many seniors take medication, with about 85% using at least one prescription drug daily.

One study found that among elderly study participants, 35% were taking multiple medications, a sobering reality known as “polypharmacy” which, if not carefully monitored, can increase the likelihood of negative drug side effects, interactions, and even overdose.

According to Klyn, most OCC members are keenly interested in exploring cannabis as an alternative to prescription medications they’re currently taking. Many have problems with pain and sleep and aren’t satisfied with the typical drugs used to treat these conditions.

A growing body of research has shown that cannabis can be profoundly helpful for many conditions that typically plague seniors.

A 2019 study published in Journal of Clinical Medicine found that cannabis improved chronic pain, sleep difficulties and other problems in 84% of study participants with an average age of 82 years old.

When pain is your constant companion

Many older people are plagued with daily pain. Pain impacts their mobility, mood, and social interactions. Drugs typically prescribed to treat various types of pain often come from the opioid class, with side effects like lethargy, sleepiness, mood changes, constipation, and even worse, increasing tolerance and addiction.

Cannabis has been shown to help with pain. An Israeli study of 2736 patients with the average age of 74 found that 93.7% reported significant improvement in their pain levels when using cannabis. After six months, 18% stopped or reduced their use of opioid pain medications.

Luckily, it’s one of the conditions for which cannabis works most effectively. A 2018 review of randomized, double-blind controlled trials investigating the use of cannabis for neuropathic pain found that the benefits outweigh the potential harms.

Klyn describes one elderly gentleman whose wife was ecstatic to find that cannabis helped his debilitating neuropathic pain.

“It was the one thing that enabled him to hit the dance floor,” Klyn says.  “They’d dance several times a week.”

Older people typically struggle with insomnia, and according to a study published in The Primary Care Companion, the problem is often underdiagnosed and undertreated. Poor sleep is associated with reducing the vitality and resilience so crucial to healthy aging, and can also increase the risk for falls and nursing home placement.

Cannabis has been shown to be a very useful sleep aid for many people, but with an asterisk. In a 2017 review of relevant studies in Current Psychiatry Report, THC was found to help patients fall asleep, but it can also cause daytime sleepiness.

On the other hand, several human and animal studies mentioned in this same review suggest that cannabidiol (CBD), a non-intoxicating cannabinoid found in marijuana and hemp, may help improve sleep quality due to its anti-anxiety effects. Another study found that the administration of a generous dose of CBD (160 mg/day) during the day increased total sleep time and decreased the number of arousals during the night. (Lower doses of CBD have been associated with increased wakefulness, demonstrating CBD’s biphasic, dose-dependent effect.)

The review goes on to say that THC in combination with CBD in a 1:1 ratio has been associated with sleep improvements among patients with chronic pain conditions. Such a ratio might offer the benefits of both cannabinoids while knocking out pain and insomnia, a potential jackpot of relief for many seniors.

Art Moura, a 66-year-old artist in Sebastopol, California, struggled with anxiety-related sleep problems for years. Then he discovered that a nightly cannabis cookie eaten about an hour before bed not only eased him off to sleep but kept him sleeping soundly. Now he makes his own cannabutter in a crock pot and mixes it with flour, fruit, nuts, and chocolate.

“Just knowing I will fall asleep takes a lot of the anxiety away,” Moura says. “My energy is much better during the day.”

Seniors in the mood

Yes, seniors do have sex, though the conditions for both men and women often become a bit challenging with age. The waning of sexual desire can be a problem among older people of both sexes, but fear not! In a 2017 study, cannabis was shown to increase sexual arousal in men and women, and a 2016 review of available literature found that cannabis was either sexually helpful or hindering, depending on the dose. For sex, anyway, less is often more.

Post-menopausal women often experience decreased libido and difficulty reaching climax. Fortunately, cannabis can help get them where they want to go. According to a 2019 anonymous survey published in Women’s Sexual Health, women who used cannabis before sex reported “an increase in sex drive, improvement in orgasm, and a decrease in pain.”

Using cannabis in the bedroom worked for Ana, a 62-year-old woman from Santa Rosa, California. Her sex life was in dry dock until a friend suggested she try marijuana. “Cannabis saved my marriage,” she says. “I used to almost dread sex, but now I look forward to the pleasure and connection with my husband.”

From reefer madness to reefer mindfulness

A safe, effective plant-based elixir that eases pain, improves sleep and provides more pleasure and connection? Like the fabled fountain of youth, it does sound too good to be true, but Oakmont Cannabis Club members know better, and they’re decidedly all in.

According to Klyn, not only do many of her senior cannabis compatriots credit the plant for helping them cut back or completely stop using prescription medications for pain and sleep, they also enjoy the many other benefits marijuana offers. And why not? They don’t have time to waste.