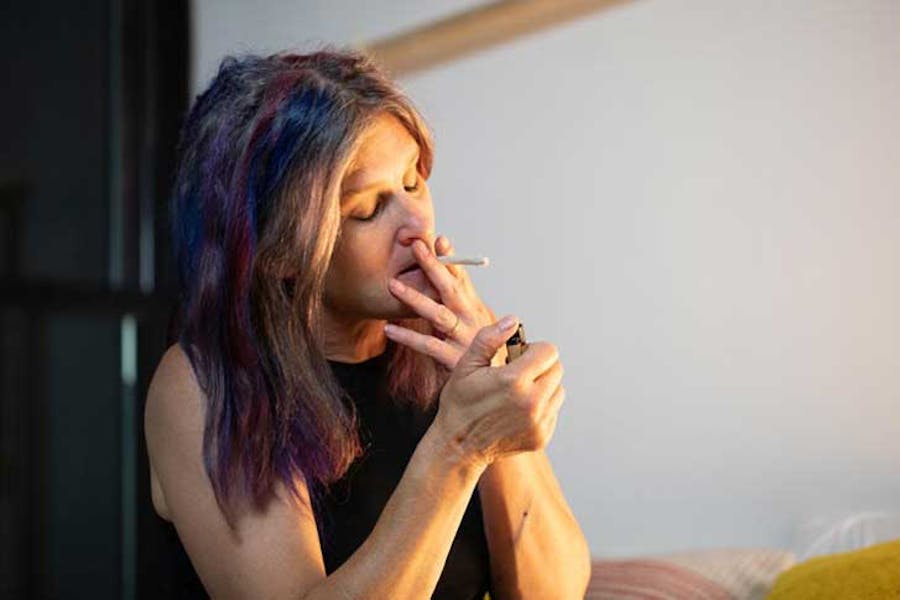 A woman smokes a joint. (The Cannigma / Anthony Travagliante)

Over a quarter of surveyed women in northern California use cannabis to treat their menopausal symptoms, according to the North American Menopause Society (NAMS).

The researchers behind the survey have called the finding “somewhat alarming,” given how little research has been focused on cannabis and the menopause.

Conducted by the NAMS, the Midlife Women Veterans Health Survey is an observational study of women veterans, aged 45-64, who have enrolled in the Department of Veterans Affairs health care plan in northern California.

“This is a reasonably representative sample of midlife and older women veterans in northern California, drawn from a wide geographic area in this region,” Dr Carolyn Gibson, a psychologist and health services researcher at San Francisco VA Health Care System and the lead author of the study, told Analytical Cannabis.

Around 27% of those sampled said they had at some point used cannabis to manage their symptoms. Although the survey didn’t record the quantities or frequency of cannabis use, Gibson told Analytical Cannabis that further studies could clarify such factors.

“This study only assessed self-reported use of cannabis in any form,” she said. “This is just a first step, highlighting a number of additional questions including the specific symptoms women were targeting; the type of cannabis products used; and how much, how often, and for how long women used cannabis to manage menopause symptoms.”

After analyzing the data, Gibson found that the women’s cannabis use was fairly uniform across the different ages, ethnicities, and socioeconomic statuses of the participants.

Only 19% of veterans reported using a more traditional type of menopause symptom treatment, such as hormone therapy. But an additional 10% of participants expressed an interest in trying marijuana for symptom management in the future.

Marijuana and the menopause

While there is evidence for historical, informal use of cannabis to treat menopausal symptoms, there has been relatively little scientific research to test the safety and effectiveness of the practice.

“There is a lot that we do not know regarding whether cannabis use is safe or effective for menopause symptom management, or whether women are discussing these decisions with their health care providers – particularly in the VA (Department of Veterans Affairs), where cannabis is considered an illegal substance under federal guidelines,” Gibson told Analytical Cannabis.

“Existing evidence does raise concerns about the impact of some forms of cannabis use on cognition, cardiovascular health, and mental health,” she added.

The American Heart Foundation recently announced that cannabis use does not seem to confer any particular benefits to heart health, although it noted that the compound CBD has been linked to lower blood pressures and reduced inflammation.

Several studies have found evidence that cannabinoids, such as THC and CBD, can help reduce insomnia – a key symptom of the menopause. But many researchers have noted the limitations of such insomnia studies and called for further evidence before any relevant clinical recommendation can be made for cannabis.

“More research is certainly needed,” Gibson concurred, “to determine if rates, insights, and implications drawn from this [NAMS] study are generalizable to the broader population.”