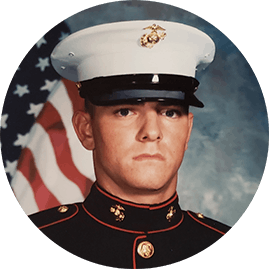 "I smoke a bowl or smoke a vape and within 20 minutes I’m just calm, I’m not over processing things in my brain." Brandon Sparks

In a North Carolina swamp in the dead of night, Brandon Sparks’ life was changed forever. At 2am on that night more than 20 years ago, two US Marine Corps helicopters collided in the sky, taking the lives of 14 marines.

When the sky lit up above the wilderness that night, 19-year-old Brandon Sparks was back at the base and was dispatched to the scene as part of the Quick Reaction Force. Sparks and his fellow marines fanned out into the swamp and began the gruesome, traumatic task of recovering the bodies.

“It was like a blender, it went in and just chopped people up left and right,” Sparks said, describing how the tail rotor of the CH-46 Sea Knight tore into the SuperCobra hundreds of feet above the swamp.

“It was more than that, it was the way they were cut up, the fact that I knew one of the kids, it was a whole bunch of stuff,” Sparks said, describing how being exposed to such carnage as a teenage marine in peacetime flipped everything in his life upside down.

Sparks was out of the Marine Corps within a year. Other than his mom and his gunnery sergeant, he never told anyone about the helicopter crash, not even his ex-wife.

It would be around 20 years later before Sparks was finally diagnosed with Post Traumatic Stress Disorder. In the meantime, he spent years struggling with his mental health, as well as with alcoholism, cocaine addiction, suicidal thoughts, and even a few nights sleeping in a homeless shelter.

In 2018, Sparks received a medical marijuana card from the state of New York after he heard about medical cannabis during a stint in a recovery center.

At the time he was on five different types of medication to treat anxiety, depression, and bipolar disorder. With medical marijuana, he has been able to cut that down to one pill for his bipolar disorder, and one anti-anxiety pill to help him sleep at night.

For Sparks, smoking cannabis flower and using vapes has allowed him to gain a sort of tranquility in his mind, which he says spent more than two decades in a state of tension and trauma.

“My brain has to get to the point where it shuts certain things off. I’m hyper vigilant so if I get triggered or get to where my brain is like, “hey dude what’s going on?” Then I start to notice too many things,” Sparks says.

“The way my brain is wired and the way it operates is different than everybody else so I have to shut certain light switches off,” Sparks said, adding that if he gets overwhelmed, “next thing you know I’m depressed and not leaving my house for three days.”

For Sparks, the first cannabis dose of the day comes in the morning.

“I wake up in the morning, I have a cup of coffee and I smoke a bowl or smoke a vape and within 20 minutes I’m just calm, I’m not over processing things in my brain. I’m not hyper vigilant, I don’t have a ton of thoughts,” Sparks said.

He added that the staff at his local Veterans Affairs office don’t like that he uses medical marijuana because it’s still a federally controlled substance, but he adds, “I’ve talked to my counselors and psychologists and they see the difference between me now and when I started medical cannabis.”

The anti-anxiety pill Sparks takes helps him cope with the “vivid, violent dreams” he has at night, though it leaves him a little foggy in the morning. This is where that morning marijuana treatment does its work.

“It baselines me to where I can function properly.”

Today, Sparks, a 42-year-old father of three girls who lives outside Buffalo, New York, is a true believer in medical cannabis, and says he wishes it was prescribed by the VA directly to veterans.

“I would tell anyone that’s suffering from PTSD that it works,” though he adds that it takes some trial and error to find the right strains and doses.

Sparks says he prefers indica strains (“because I need to shut things off”) while other veterans he knows prefer sativas for the more energizing high.

Regardless, he couldn’t be more clear about how he feels about his medicine.

“I scream from the high heavens: Use cannabis.”