Wedding Cake, also known as Pink Cookies, is a high-powered indica-dominant hybrid that can make any time of the year feel like it’s wedding season (but in a good way). Wedding Cake weed has won no shortage of accolades for its potent and euphoric high, sour and creamy flavor, and the sticky trichome frosting across the at every layer of the bud.

If you haven’t saved the date for Wedding Cake, here’s why you should. 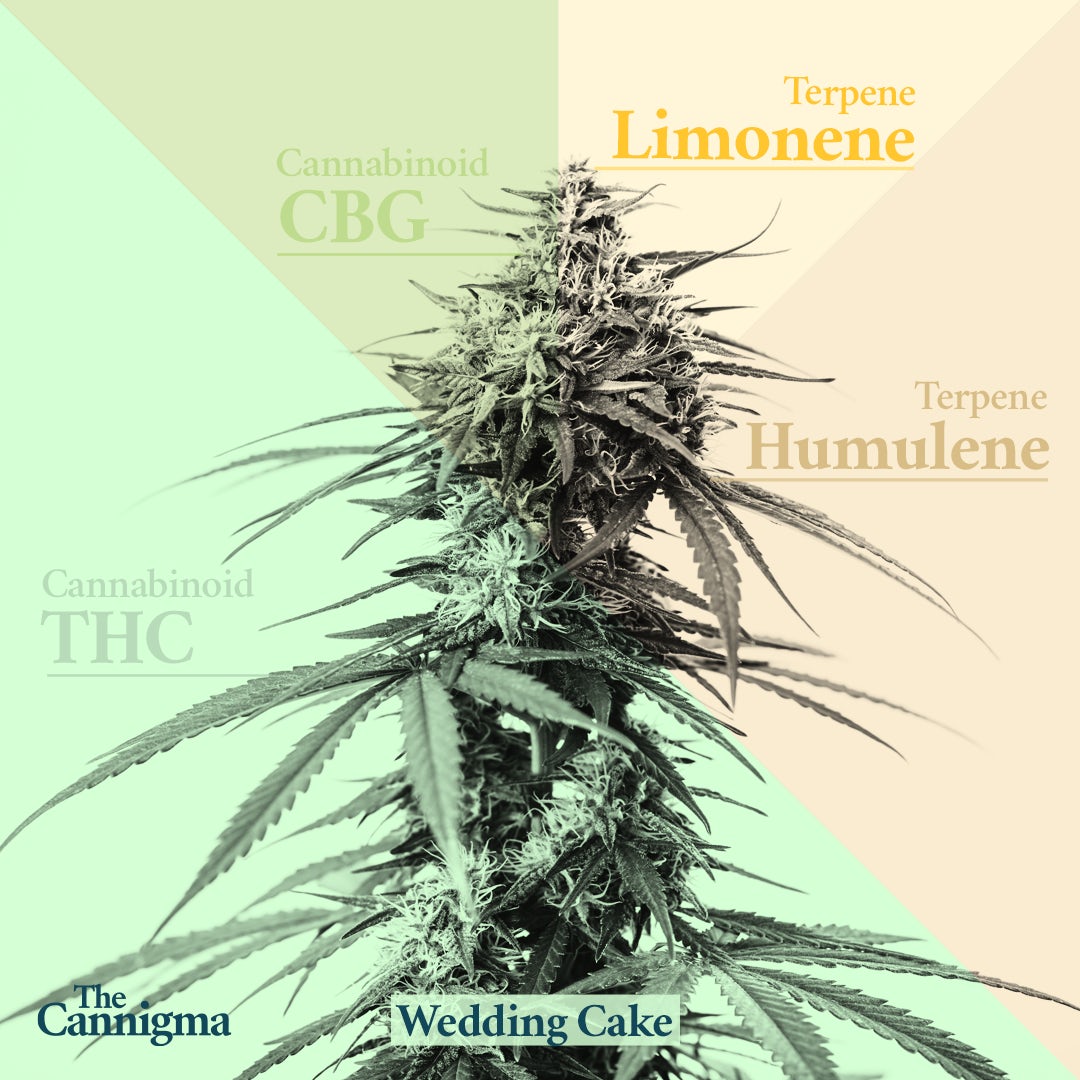 Widely-known as a cross of Cherry Pie and Girl Scout Cookies, according to Seed Junky Genetics – the reputed breeders of the strain – Wedding Cake is actually a combination of a Triangle Kush mother and an Animal Mints male.

Furthermore, the breeders state that the name Wedding Cake was given to the strain “because of its unmistakable vanilla cake frosting aroma.”

Be it the aroma, or the layer of trichome frosting, what’s clear is that Wedding Cake has been one of the most popular and dominant cannabis strains in recent years.

Wedding Cake was named Leafly’s Strain of the Year for 2019, and the outlet stated that even though other strains have made tons of noise, “Wedding Cake, with its proliferation throughout the world, cultural influence, and overall impact on the cannabis world, ultimately reigned supreme.”

There is also some confusion regarding whether or not Wedding Cake and Pink Cookies are literally the exact same strain. Many sources state that Wedding Cake is a cross of Girl Scout Cookies and Cherry Pie (which together sounds a bit like it would evoke pink cookies) and it could be that the Wedding Cake you purchase has this make up instead of the Animal Mints and Triangle Kush parentage. According to Westword, “Wedding Cake’s pink and purple hues are so striking that the strain is known as “Pink Cookies” in some circles.” Still confused? Perhaps the Baltimore Beat sums it up best:

“Whatever Wedding Cake may be, it is essentially a meandering maze of wonky weed hybrids, sweet cookie crosses, and word of mouth. Its appeal is its slipperiness.”

One thing to keep in mind is that while it might be easier on your waistline, this strain doesn’t really taste like a wedding cake, though many fans describe it as tasting sweet and creamy. The flavor is also described as earthy and sweet, with sour hints,and even vanilla.

The buds aren’t quite as Instagram-ready as an actual wedding cake, but they are known for being thick and frosty, with purple accents and orange hairs.

And the high? Wedding Cake is known for being a potent strain that creates a powerfully euphoric, relaxing high. It might not be the best morning or midday strain, more like a nice dessert for the evening hours.

Cannabinoids and terpenes in Wedding Cake

The chemical profile you see below is an average of laboratory tests for products called “Wedding Cake” — so it’s just an estimate of what you might find when you buy Wedding Cake weed.

Caryophyllene 0.24%
* The numbers in the tables are averages of data from multiple resources
** Terpenes are of pharmacologic interest at concentrations above 0.05%

How Wedding Cake affects you

Based on user reports, the Wedding Cake strain can produce relaxation, happiness, euphoria and upliftment. Wedding Cake can sometimes cause dry mouth, dry eyes, and less often dizziness and anxiety.

But really, marijuana affects people in different ways. The two main factors are your own biology (your endocannabinoid system, metabolism, age, weight, etc). and the product you choose (including its cannabinoid and terpene profile, and the delivery method used).

Wedding Cake can be grown both indoors or outdoors, and it has a flowering time of around 7-9 weeks.

The plant actually responds well to humidity and doesn’t need an especially dry climate. It does grow pretty thick foliage and dense sticky buds, so make sure to prune regularly and to keep things well ventilated.

Wedding Cake grows quite short, and produces a sizeable yield — as much as 18 to 21 ounces or more if grown outside. That said, outdoor growing is really only feasible for people who live in warm, rather humid locales.

One issue you may have is in finding seeds for Wedding Cake, which is more often sold as a clone.

Parent strain Triangle Kush (also known as OG Triangle) is a indica-dominant hybrid from Florida that was originally derived from OG Kush and is unknown for relaxing and creativity-inducing effects.

Animal Mints is another high-powered, indica-dominant strain that was made by crossing Animal Cookies, Girl Scout Cookies, and Blue Power. It’s known not only for its body and mental high, but also its delicious sweet, minty, and vanilla flavor.

Wedding Cake itself has become a popular strain for breeders in recent years, who look for ways to bring its potent high and frosty buds into new genetics. Breeders have used it to create strains like Strawberry Tree (a cross with Dose-Orange #9), Wedding Pie (a mix with Grape Pie), Dosi-Cake (a cross with Do-Si-Dos), Matty Cakes (a cross with Matanuska Thunder Fuck), and Twinkiez (a cross with Oreoz).