Some strain names just sound like what the herb does. Take the Superglue strain for instance, a potent indica-heavy hybrid with high THC levels. Superglue is known for its strong, tranquilizing high that can leave you, well, glued to the couch. And this glue is actually safe to sniff, with an aroma that’s sweet, skunky, and with hints of pine and even caramel. 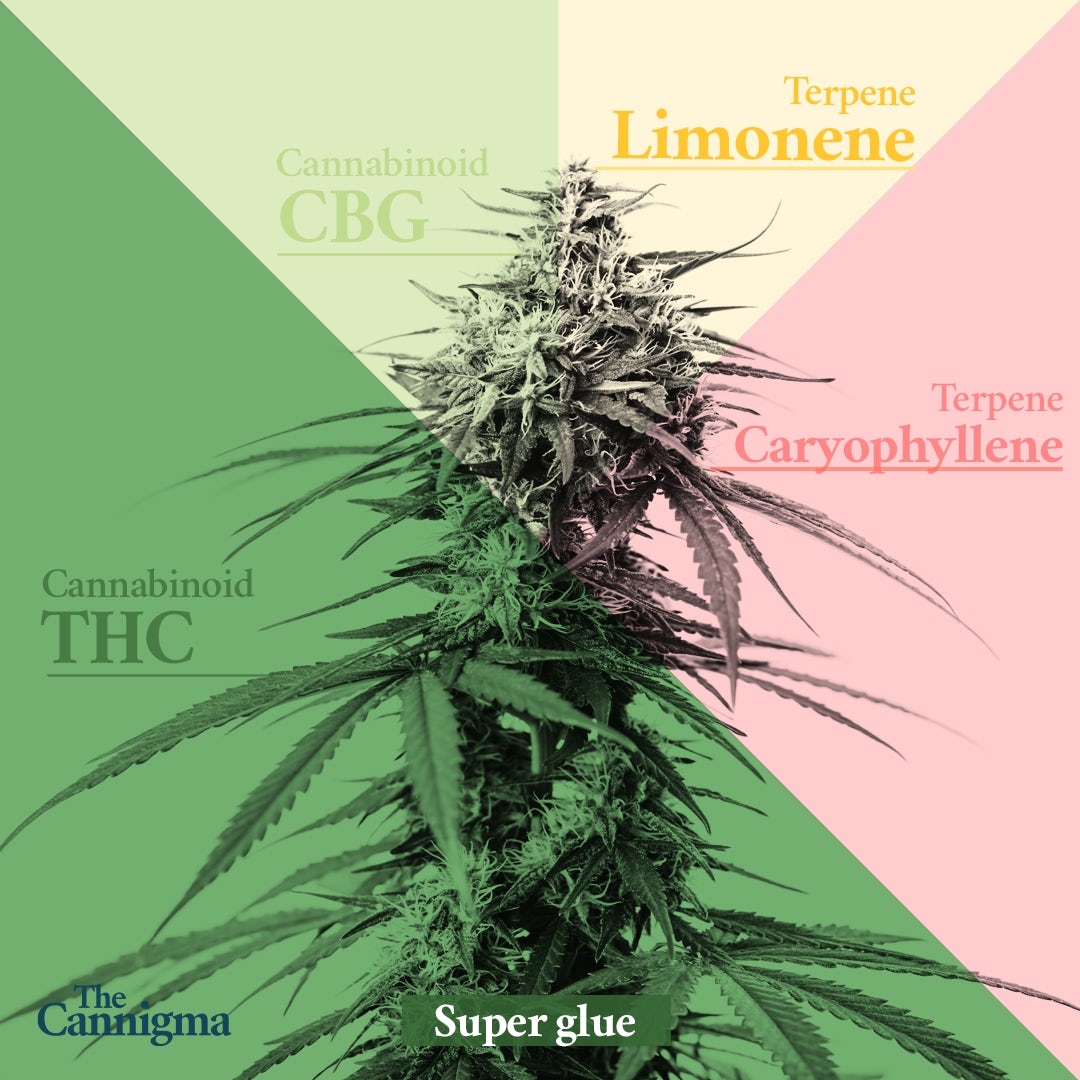 Two of the most famous and acclaimed old-school indica strains are cited as Supeglue’s parent strains, and that alone should be reason enough to give it a try.

The Seedism Seeds collective is regularly credited with first breeding Superglue, which is described as a mix of Northern Lights and Afghani – which could explain its deeply chill high. Of course, the often quite high THC level of this strain surely plays a role in the powerful high it can produce.

Seedism seeds describes the aroma of Superglue as a “balance between pine and caramel” and the strain in general as a medium strength hybrid with “a relaxing, social after effect.” Others describe it as having a more sour-sweet and skunky bouquet mixed with pine. Much like Afghani, it can produce thick heavy smoke on the inhale.

The high is typically described as beginning with a head rush, followed by physical relaxation that’s best for the couch and a binge-watching session.

Cannabinoids and terpenes in Superglue

The chemical profile you see below is an average of laboratory tests for products called “Superglue” — so it’s just an estimate of what you might find when you buy a product named Superglue.

How Superglue Strain affects you

Based on user reports, Superglue strains can produce relaxation, happiness and euphoria, and cause adverse effects such as dry mouth, dry eyes and dizziness. But really, marijuana affects people in different ways. The two main factors are your own biology (your endocannabinoid system, metabolism, age, weight, etc), and the product you choose (including its e cannabinoid profile and terpene breakdown, and the delivery method used).

Seedism Seeds says “ruined scissors and many hours of trimming make the Superglue a strain to be prepared for. The sheer size of the colas produced by this baby require adequate airflow to prevent issues later in her flowering cycle.”

Seedism states that the strain is ideal for “cash-crop growers who desire both yield and quality and don’t mind investing in new scissors every harvest.” The breeders also stated that despite the stickiness and the distinctive aroma of Superglue, “this strain does not stink too much during her flowering period making her suitable for growers who prefer to keep the smell down.”

Superglue seeds can be hard to find online, but if you do get your hands on them, you’ll find a strain that isn’t difficult to grow, doesn’t take up too much space, and should produce a hearty harvest of strong, aromatic weed to take you through the months that follow.

Superglue’s parent strains – typically named as Afghani and Northern Lights – are among the most influential and well-known indica strains of all time. Afghani genetics have scattered across the cannabis world over the past several decades, and just like Northern Lights, it has a distinctive, relaxing high that wraps you in its embrace.

Countless people surely would compare it to Gorilla Glue (aka GG4), which is also known for producing a chill, sticky and deeply relaxing sensation, though the parentage is quite different (a mix of Sour Diesel, Sour Dubb, Chem’s Sister, and Chocolate Diesel).

Seedfinder also has an entry for Super Glue (also referred to as Mammut) a hybrid bred from Gorilla Glue #4 and Starfighter, which would be a relaxing, strong high, but still a strain quite different from Superglue.

Ask the Expert Can I substitute coconut oil for vegetable oil in weed gummies?
Previous Article Golden Goat Next Article Critical Mass
The Cannigma uses cookies to improve your experience and to show you personalized adsACCEPTPrivacy Policy
Manage consent