With a potent high that hits across the body and mind, high THC levels, and high yields of big dense buds, Critical Mass is a cannabis strain that was destined to make an impact. This strong indica was crafted by crossing Afghani and Skunk #1, and can be a perfectly relaxing strain for the end of the day when you just want to sink your Critical Ass into the couch. 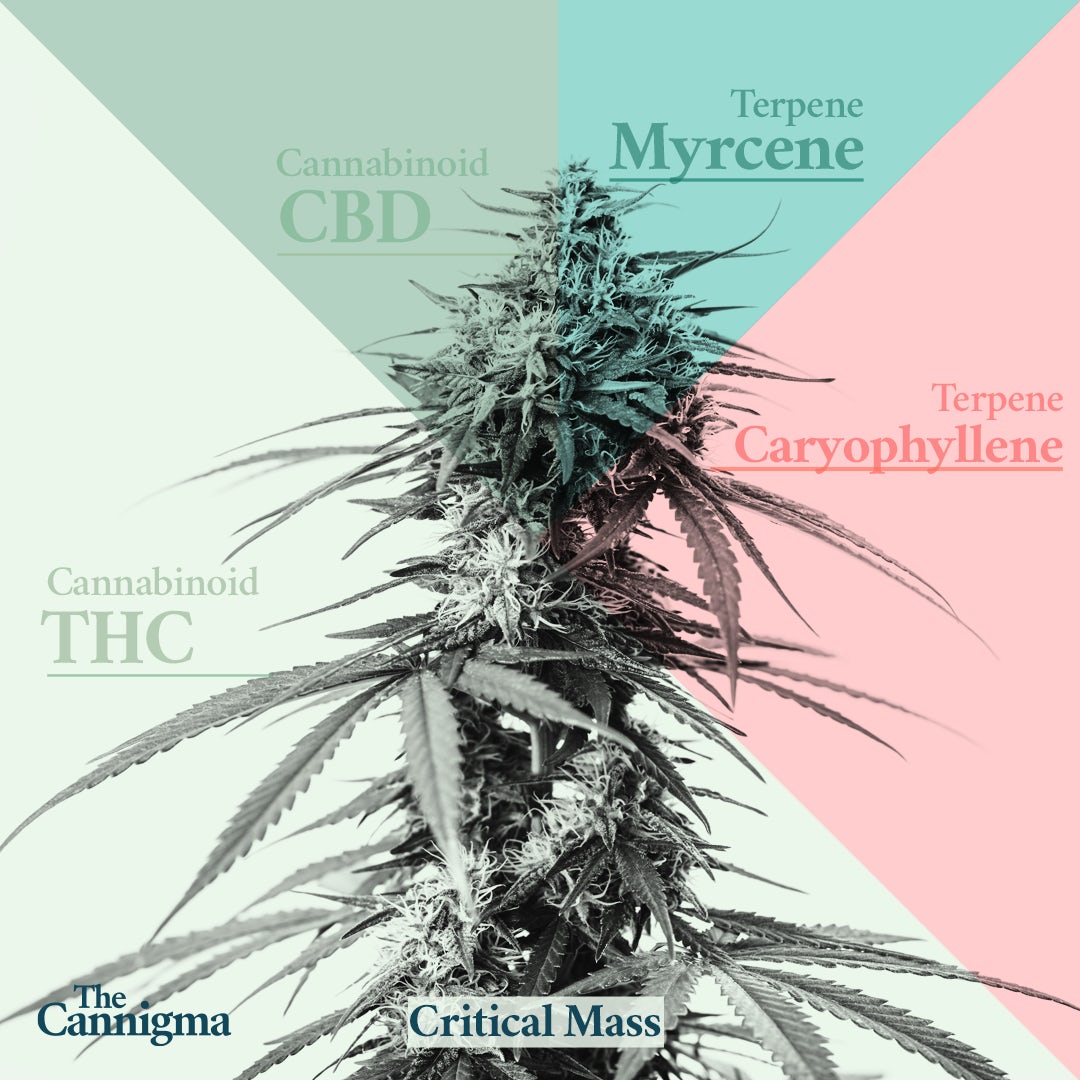 Critical Mass is the creation of Dutch grower, Mr. Nice, who dechscribes it as “a reworked excellent version of an old breed once known as Big Bud.”

Mr. Nice said that it has “a genetic pedigree originating from particularly heavy Aghani combined with the original Skunk #1.”

The strain name is often believed to have to do with the very large, heavy buds it produces, or, as Mr. Nice puts it, “it is the heaviest plant currently in production for commercial farmers and outdoor crops, resembling the male genital protrusion of a giant donkey.”

Whatever similarities it may have to donkey anatomy, at least two different sites state that Critical Mass had been referred to as “the Blue Dream of Europe” because of its potency and yield.

The flavors of Critical Mass can be piney, earthy, and pungent, while the aroma can be citrusy and musky as well. It can also have a kush flavor due to its Afhgani genes.

The high can be a sleepy, chill, couchlock affair befitting the name, though many users also state that in small doses it can be thought-provoking and creative. Regardless, it’s usually more of a nighttime strain.

Cannabinoids and terpenes in Critical Mass

The chemical profile you see below is an average of laboratory tests for strains called “Critical Mass” — so it’s just an estimate of what you might find when you buy Critical Mass weed. This strain is often tested with low THC concentration (average roughly 10.4%), medium-low amounts of CBD (5.7%) and modest amounts of BCP (0.3%) and myrcene (0.3%).

Pinene 0.2%
* The numbers in the tables are averages of data from multiple resources
** Terpenes are of pharmacologic interest at concentrations above 0.05%

How Critical Mass affects you

Based on user reports of the Critical Mass strain, it tends to produce relaxation, happiness, euphoria and sleepiness. These effects may be related to the sedative and relaxing properties of BCP and myrcene. Critical Mass can sometimes cause dry mouth and dry eyes, and less often, dizziness and anxiety.

But really, marijuana affects people in different ways. The two main factors are your own biology (your endocannabinoid system, metabolism, age, weight, etc). and the product you choose (the cannabinoid profile and terpene breakdown, and the delivery method used).

Mr. Nice, when not likening his strain to a donkey’s genitalia, says that Critical Mass can grow 650-750 grams per square meter, and should be ready to harvest in September in the northern hemisphere, if you’re growing outdoors.

Virtually all grow sites describe it as easy to grow, which produces a critical mass of large buds without a whole lot of work. The strain is said to be somewhat susceptible to mold, so keep things well ventilated and dry.

Also, the buds can get so large that they are known for actually being able to break their branches. You can avoid this problem by using support stakes and affixing or tying the branches to them..

Critical Mass should be ready to harvest in about 8-9 weeks.

Just hearing the names of the two parent strains of Critical Mass — Afghani and Skunk #1 — is enough to put a smile on your face. Afghani is a heavy-hitting indica that’s known to create a blissful and tranquil high, while Skunk is a hybrid that has been used to breed countless cannabis strains over the past several decades, and is known for upbeat and cerebral high.

Critical Mass has also been a popular strain for breeding, and its genetics and effects can be seen in strains like Critical Kush (a cross with OG Kush) and Critical 47 (a cross with the high-powered and pungent AK-47). The word “Critical” in the strain name is a good indication that it is likely to be a Critical Mass cross, but make sure to ask your budtender first.