The right cannabis strain can make you feel like a West Coast rapper (“Losangelesconfidential” is the Game’s instagram handle) after a Lakers title, or lull you into the cool twilight vibes of an LA noir film. With a sweet, smooth taste and a skunky aroma, the LA Confidential strain is a potent indica that can make any day feel like Friday, even if you just got fired on your day off. And don’t let the name fool you — there’s nothing confidential about this very popular, very loud strain. 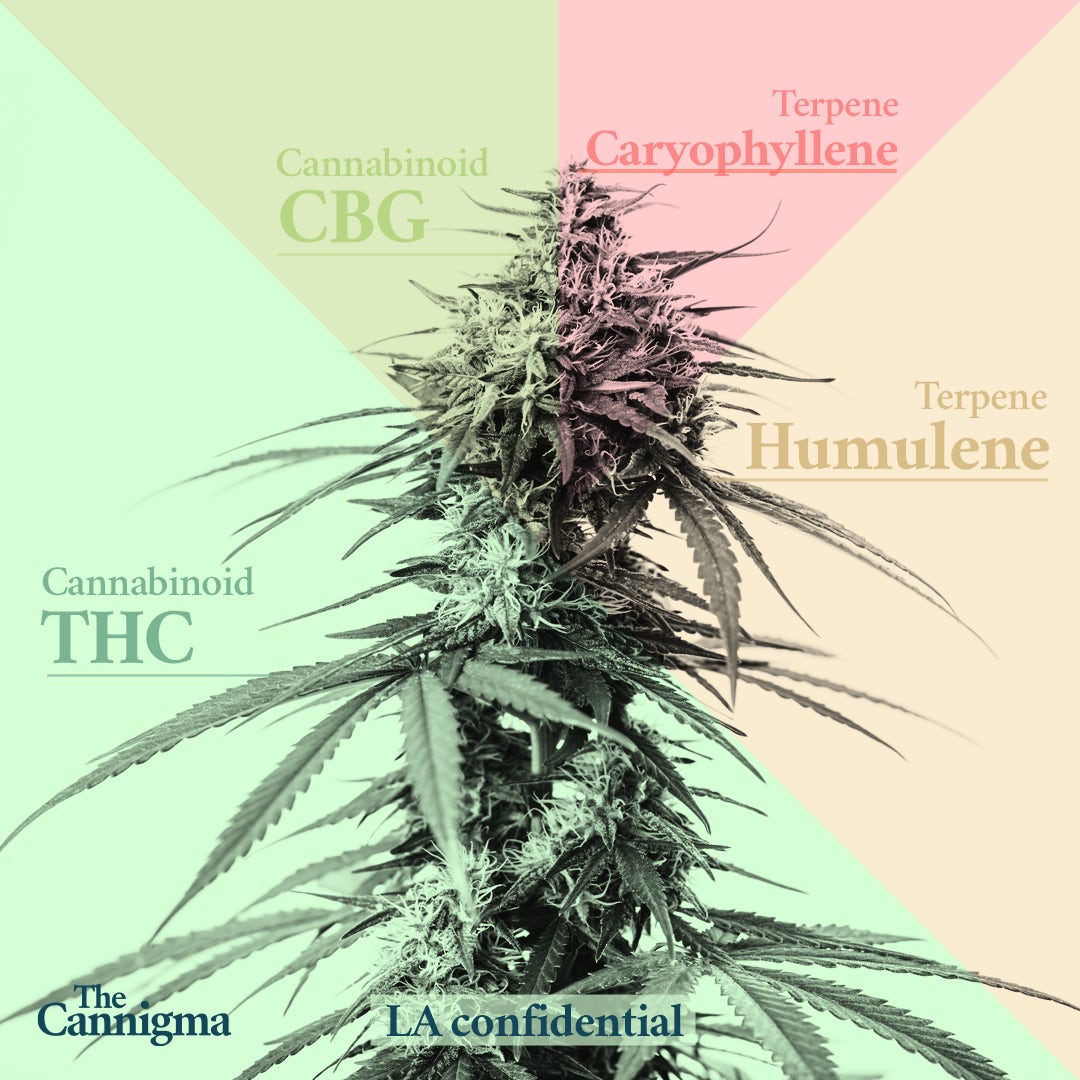 About two decades before Don Morris and Aaron Yarkoni founded an icon of the marijuana growing community, Aaron was an LA high school kid picking seeds out of bags of dirt weed and tossing them out his window, where eventually one of them sprouted. Like that he was hooked on growing weed, and in 2003 he and Don Morris moved to Amsterdam to set up shop, taking “our Cali vibe and style with us, along with the California medical marijuana genetics that deserved to be shown to the world.”

In an interview from 2015, Yarkoni described not being very impressed by the weed at the coffeeshops when he moved out to Amsterdam, and decided they needed to freshen up the scene. He said they took a clone called the Alfie from LA, “a short plant, it smells great, it tastes great” and crossed it into an aghani variety to get LA Confidential.

“It’s a great strain, it reminds me of California,” Yarkoni said.
Yarkoni is all about the flavors and aromas of weed, and told the interviewer “really it’s about the terpenes, the terpenes are the flavors that you taste and the smells that you smell. People talk about oh i got the highest THC or I got the highest CBD but what they’re not talking about because they don’t know the flavors and the smells are the most medicinal parts of the plant.”

The breeders at DNA Genetics describe LA Confidential as a 100% indica blend of OG LA Alfie and Afghani. DNA Genetics says the strain can “alleviate pain and eliminate insomnia” and it produces a high that is “psychedelic yet energetic” (those don’t have to be contradictions).

In a lot of ways, LA Confidential is what people think of when they think of a classic indica. It has Afghani parentage, produces a strong, very chill high that can be great for insomnia, along with a euphoric high that can break you out of that couch lock. The flavor is piney and it has a skunky aroma that wraps you up in a powerful high that might have you missing LA even if you’ve never been. These effects are correlated with the below chemical profile, in which caryophyllene can explain the efficacy with insomnia, and pinene and limonene might cause an “anti-couch lock” effect.

Cannabinoids and terpenes in LA Confidential

How LA Confidential affects you

When trying to predict the effects of a particular chemovar, it’s important to look past the THC percentage or the strain name and focus instead on the chemical profile.

That said, while the fact that a plant is indica or sativa doesn’t predict its effects, based on user reports from resources like Leafly and Wikileaf, L.A Confidential can produce relaxation, happiness, euphoria and sleepiness. It also can cause some of the common side effects of cannabis, including dry mouth, dry eyes, and a dizziness.

But really, marijuana affects people in different ways. The two main factors are your own biology (your endocannabinoid system, metabolism, age, weight, etc). and the product you choose (the cannabinoid profile, the terpenes breakdown and the delivery method).

That being said, the above chemical profile could potentially help with conditions and symptoms such as pain and inflammation, insomnia, stress and depression.

LA Confidential is considered an easy to grow strain that produces a moderate yield and can be cultivated both indoors and outdoors. It grows short — which helps make it less conspicuous — and perhaps thanks to its Afghan parentage, it’s a hardy plant that can withstand molds and mildews.

As DNA Genetics puts it, LA Confidential “is a heavy eater,” and it should be ready to harvest in 45-56 days. The company also recommends pre-vegging and in the later stages, thinning large fan leaves to help the lower flowers get more light.

The chemovar needs a warm and dry climate, and plenty of light.

LA Confidential bears similar effects to its indica parents and anyone who likes Afghani or Afghan landrace strains and kush strains will probably find a lot to love here. Another DNA Genetics strain — Kosher Kush — is a high-THC indica chemovar that produces a similar high and earthy flavor, though with a different terpene profile. The White Label Seed Company’s Master Kush is an indica strain with Hindu Kush parentage a similar that is said to produce tastes and aromas similar to those of LA Confidential.