It may not be the Greatest Of All Time, but Golden Goat is a very sweet and potent strain with flavors that are described as akin to tropical fruit, with brilliant looking buds that are light green with shades of pink. A strong, sativa-dominant hybrid known for its euphoric, uplifting high that courses across the whole body, the Golden Goat strain shines as bright as its name. 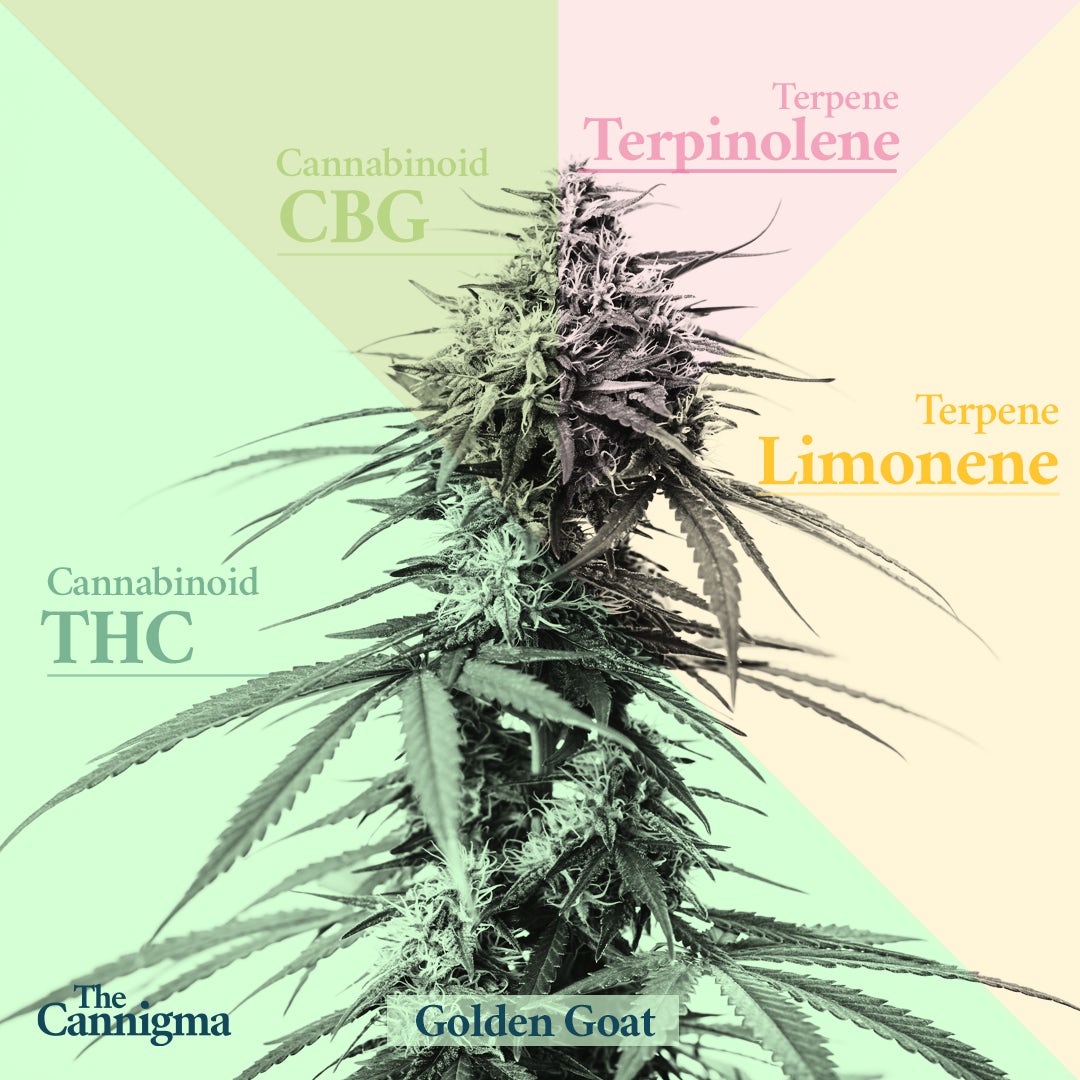 The origin story of Golden Goat begins in a town not often depicted as a mecca of wonderful cannabis genetics — Topeka, Kansas. As the story goes, the strain was created by accident, when an Island Sweet Skunk plant was accidentally pollinated by a male Hawaiian-Romulan plant.

As many a cannabis smoker would admit, countless great marijuana experiences take place by accident, including accidental births.

One explanation for the name is that it was deemed Golden Goat “after the smell of Golden Goat Recycling machines in the dead of summer, when all the soda syrup smells would mingle in the hot sun.”

The strange and reportedly accidental union created a wholly unique strain, one that has light green nugs with pink and red hues, and which are covered in trichomes, giving the nugs something of a golden sheen. The aroma is unique too — described as everything from an almost tropical fruit mix of Hawaiian landrace strains to lemon zest and cherry grenadine, along with a fruity and also sour flavor. All that mixed together can create a flavor and aroma profile that can be a bit strong, but many users swear by it.

Golden Goat is a potent strain that can be both energetic and cerebral, with a relaxing vibe and a strong body high as well. It’s more of a daytime strain, perfect for days when you’ve got some happy accidents planned.

Cannabinoids and terpenes in Golden Goat

The chemical profile you see below is an average of laboratory tests for products called “Golden Goat” — so it’s just an estimate of what you might find when you buy Golden Goat weed.

Caryophyllene 0.17%
* The numbers in the tables are averages of data from multiple resources
** Terpenes are of pharmacologic interest at concentrations above 0.05%

How Golden Goat affects you

Based on user reports, Golden Goat can produce happiness, upliftment, euphoria and energy. When it comes to adverse effects, it can mainly cause dry mouth and dry eyes. But really, marijuana affects people in different ways. The two main factors are your own biology (your endocannabinoid system, metabolism, age, weight, etc). and the product you choose (including its cannabinoid profile and terpene breakdown, and the delivery method used).

Like many sativa or sativa dominant strains, Golden Goat grows tall and really needs some space between it and other plants to let it stretch out. It can grow well over 6 feet high, and needs to be pruned regularly. Also like many sativas, it has a slightly longer grow time — around 9 to 11 weeks.

These are a couple reasons why it’s arguably not the easiest strain to grow. At the same time, it’s known to be resistant to disease, and to thrive in dry and warm weather with temperatures between 72 and 80 degrees Fahrenheit, which is another reason that you may prefer to grow it outdoors.

The accidental parent strains for Golden Goat are typically named as Island Sweet Skunk, an energetic and potent sativa, and a second strain that was a mix of Romulan, a strong and relaxing indica, and Hawaiian, a strong sativa.

Like Hawaiian, Golden Goat has an often sweet and tropical flavor, as well as a cerebral and happy high. These effects and the fruity, tropical flavor are also hallmarks of Island Sweet Skunk. And the heavy, couch lock indica effects of Romulan can be felt in the way that Golden Goat can have relaxing effects in addition to its uplifting vibe.

Regulation Is weed legal in Poland?
Previous Article Death Star Next Article Superglue
The Cannigma uses cookies to improve your experience and to show you personalized adsACCEPTPrivacy Policy
Manage consent