The planet destroying weapon of an evil empire may sound like a buzzkill, but Death Star is a potent, indica-dominant hybrid that should have you feeling euphoric and relaxed, and in no mood to go out and obliterate any rebel-held planets. A cross of two cannabis world classics (usually identified as Sensi Star and Sour Diesel), Death Star feels and tastes as good as you expect. And at least for a little while, may just make your problems seem like they’re off in a galaxy far, far away. 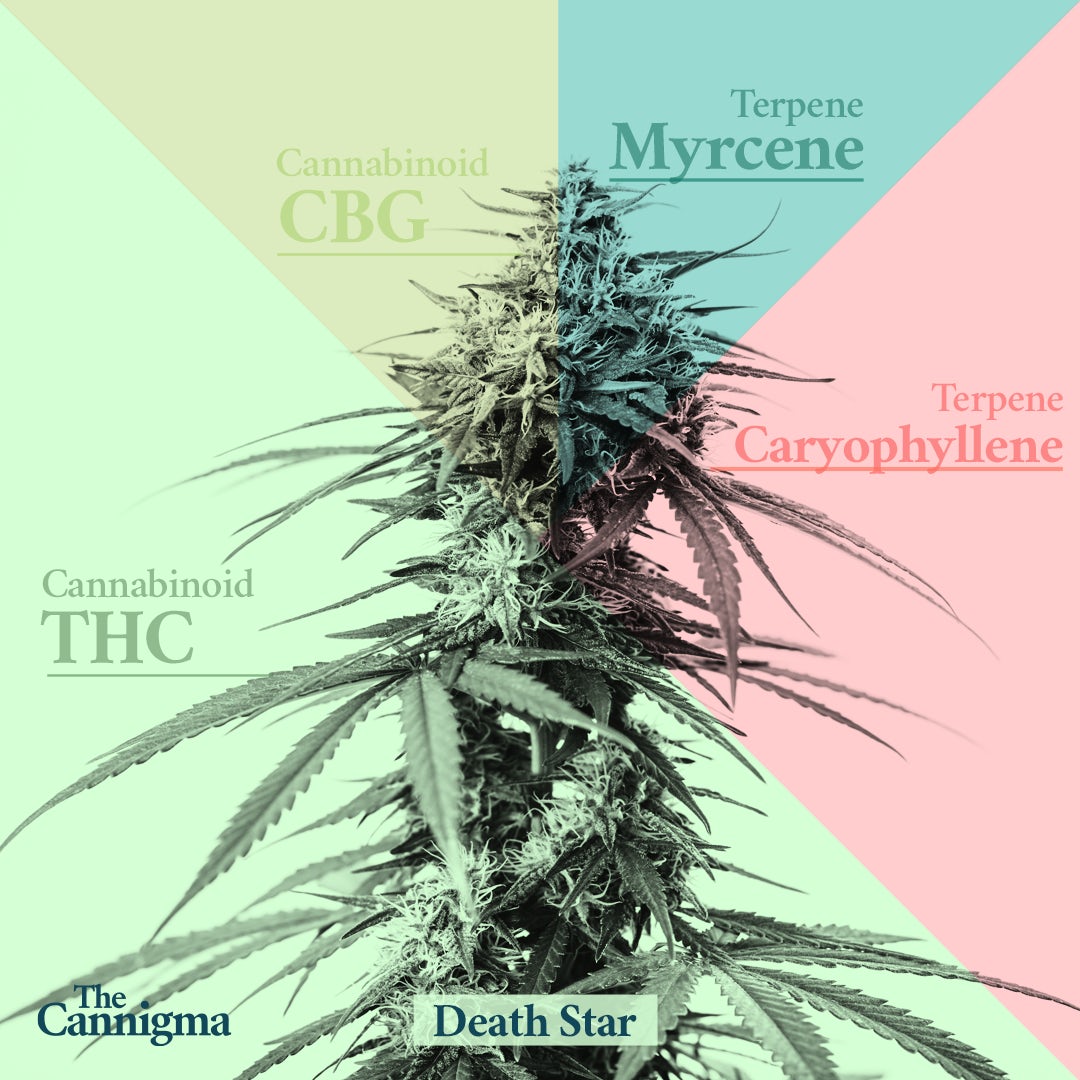 It may come as something of a surprise, but this strain named after the doomsday weapon of an evil celestial empire was actually bred in….the Midwest, of all places. According to a Weedmaps article from 2019, the strain has been a hit in dispensaries in the Midwest for the past two decades, and it was first bred by Team Death Star in Ohio, a group of breeders now based in Nevada.

(The article also mentions the fact that Death Star appeared on the cover of the February, 2010 issue of High Times with the tagline “New Hot Strain Death Star,” and that in an article inside, Carlos Santana said it’s the only strain he’ll smoke)

Ryan of Team Death Star told WeedMaps that after following jam bands around the States for years, Team Death Star returned home to Ohio, largely because “when I saw East Coast Sour Diesel, it was one of the strains that made me go, “I’m getting off tour and growing this weed. ”

Ryan said they got the genetics for East Coast Sour Diesel from a cultivator in Vermont, and crossed it with Bubble Gum and G-13. Ryan said ““Some old hippie lady came up and said, ‘Yo that weed is the Death’” Ryan said. “And my buddy Hash WookieMan was like ‘Yo…we should call it the Death Star!’ ”

An often quite high THC strain, Death Star packs a punch as well as a strong diesel and skunk aroma. The taste is also strongly diesel, though with a nice bit of citrus to it as well. The high it produces is usually described as relaxing and euphoric, and neither too upbeat or too sedate.

Death Star buds are often a bright green with hints of purple, and a thick coating of trichomes running across the buds like a canopy of stars across the night sky.

May the Death Star Strain Be With You.

Cannabinoids and terpenes in Death Star

The chemical profile you see below is an average of laboratory tests for products called “Death Star”— so it’s just an estimate of what you might find when you buy a Death Star.

Humulene 0.14%
* The numbers in the tables are averages of data from multiple resources
** Terpenes are of pharmacologic interest at concentrations above 0.05%

How Death Star affects you

Based on user reports, the Death Star strain often produces relaxation, euphoria, happiness, and sleepiness. In terms of side effects, it can cause dry mouth, dry eyes, and dizziness. But really, marijuana affects people in different ways. The two main factors are your own biology (your endocannabinoid system, metabolism, age, weight, etc). and the product you choose (the cannabinoid profile, the terpenes breakdown and the delivery method).

Death Star weed is considered easy to grow, and does well both indoors and outdoors. A lot of this ease of growing is because it’s highly-resistant to disease, mold, and mildew. In the Weedmaps article, Death Star grower Ken said that the strain is particularly resistant to mold.

Death Star grows very short and has a flowering time of around 8 to 9 weeks indoors. It prefers a sunny climate where it still has some shade and not too much direct sun.

Because of its short stature this is an easy plant to grow discreetly and quickly, without much fuss or worry about pests and disease. It can be very pungent though, which is something to keep in mind.

Death Star is not an especially high yield strain, but it doesn’t require a great deal of work or expertise either.

Death Star has a familiar aroma and flavor to its Sour Diesel parent strain, while the Sensi Star genetics could be responsible for the citrusy flavor and the warm and fuzzy, sedative effect it can have. The mix of these two strains — the more energetic Sour Diesel and the more relaxed Sensi Star — is reflected in the fact that Death Star is a well-balanced strain that’s good for both day and night use.