Like a precious metal, this strain is captivating to the eye, with a shimmer of trichomes dusted across its buds. Platinum OG is an indica-dominant cannabis strain worth writing home about — with a heavy, relaxing high that hits both the body and mind with a happy couch-lock feeling that’s worth its weight in gold. 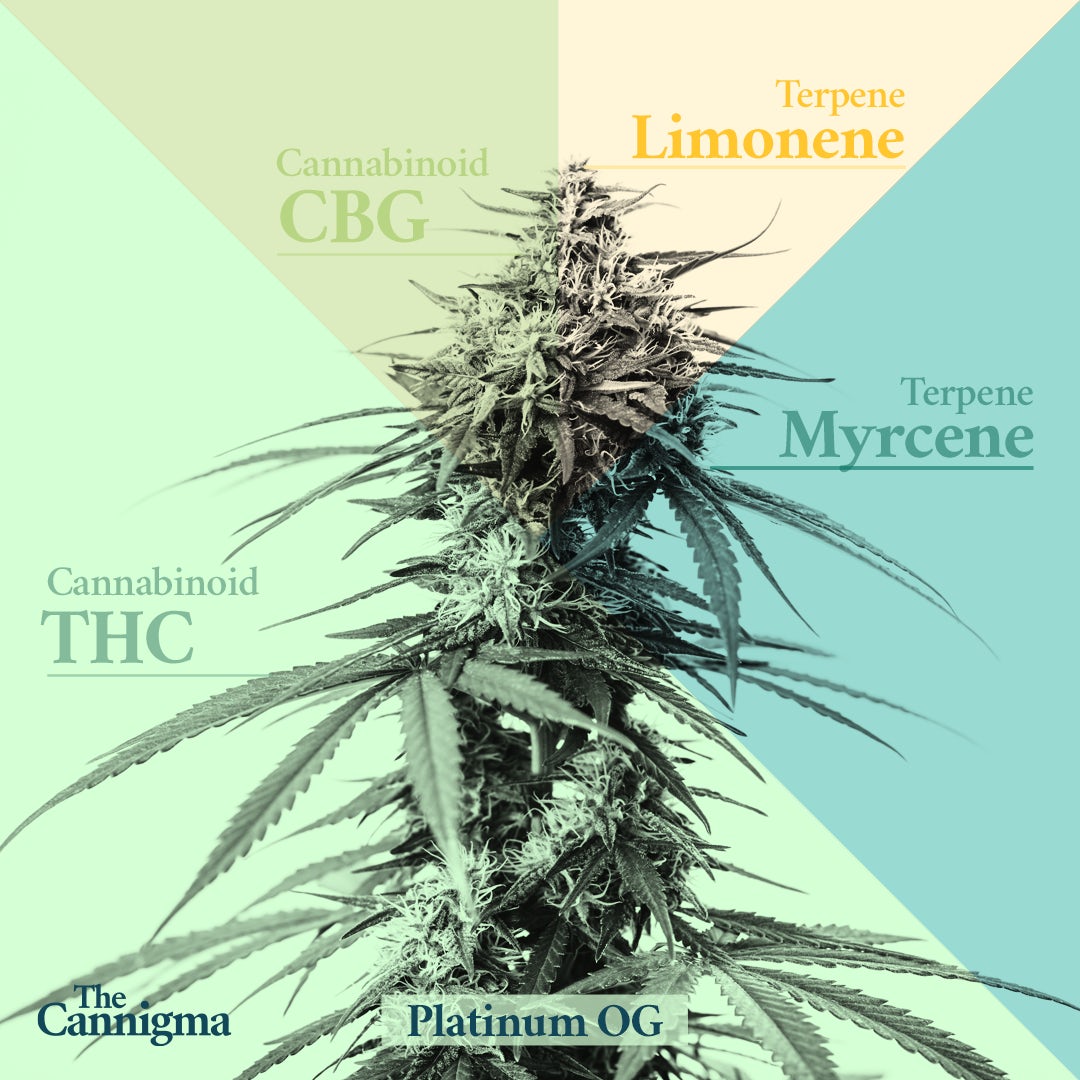 Most sources state that Apothecary Genetics in Washington State was the original breeder of the Platinum OG strain, though some mystery surrounds the precise strains used to breed it. It’s typically described as a mix of OG Kush, Master Kush, and strains such as Afghani and Mendo Purps, among others.

Platinum OGproduces a thick, full-bodied smoke and has flavors that range from pine to diesel. The heavy dusting of trichomes can also make it a great strain for making hash and other concentrates.

Platinum OG is the type of heavy kush strain you’ll want to hit slow, letting the full effects of this high-THC strain wash over you before you head back to the bong for another pull.

Cannabinoids and terpenes in Platinum OG

The chemical profile you see below is an average of laboratory tests for products called  “Platinum OG” — so it’s just an estimate of what you might find when you buy Platinum OG.

Humulene 0.12%
* The numbers in the tables are averages of data from multiple resources
** Terpenes are of pharmacologic interest at concentrations above 0.05%

How Platinum OG affects you

Based on user reports, the Platinum OG strain tends to produce relaxation, sleepiness, euphoria, and happiness, and could cause dry mouth, dry eyes, and dizziness. But really, marijuana affects people in different ways. The two main factors are your own biology (your endocannabinoid system, metabolism, age, weight, etc). and the product you choose (the cannabinoid profile, the terpenes breakdown and the delivery method).

Platinum OG’s flowering time is around 9 weeks, and if you’re growing outdoors you should expect to harvest around mid-October. Platinum OG produces a pretty low yield — around 1-1.2 ounces per square foot — and around 12 ounces per plant if grown outdoors.

Luckily, it’s considered a relatively easy cannabis strain to grow, even for novices. It doesn’t require a lot of careful attention and it is resistant to pests and mold.

It prefers a warm and sunny climate, so make sure to keep it out of the cold and rain.

The two most commonly-cited parent strains of Platinum OG — OG Kush and Master Kush — are cannabis celebrities in their own right. OG Kush has been one of the most popular cannabis strains for a couple decades, largely because of the strong, energetic yet relaxing high it produces. It’s a much more balanced hybrid than Platinum OG, but it also has buds that are covered in trichomes. Master Kush is a mainly indica strain that produces more of a Hindu Kush style full-body relaxation that people associate with classic kush strains.

Ask the Expert Can I substitute coconut oil for vegetable oil in weed gummies?
Previous Article Lemon Tree Next Article Death Star
The Cannigma uses cookies to improve your experience and to show you personalized adsACCEPTPrivacy Policy
Manage consent