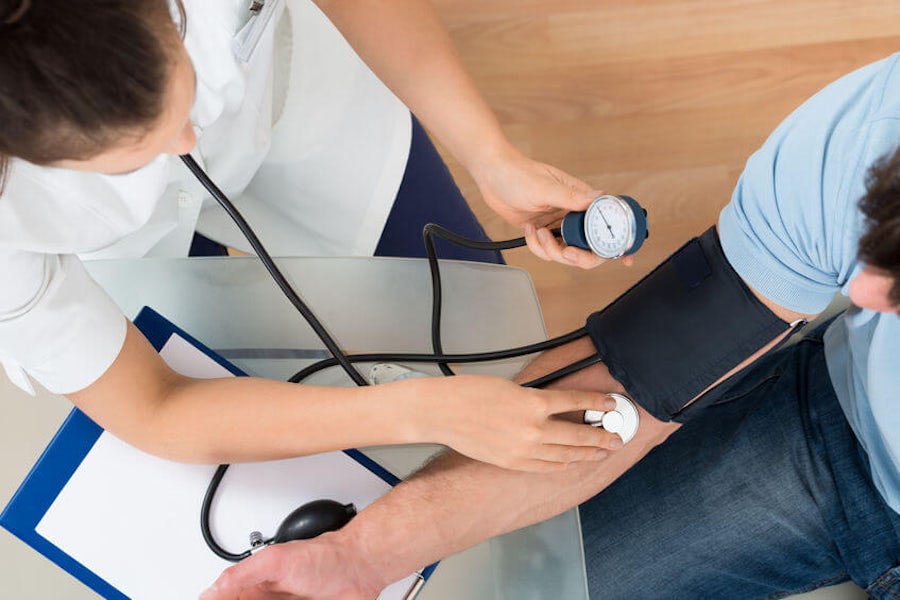 Using cannabis for several months is associated with a significant reduction in blood pressure among older adults with hypertension, according to a prospective study published last week.

The researchers took readings on 26 patients over the age of 60 both before and three months after starting to use medical cannabis, and found that the participants’ overall blood pressure — both systolic and diastolic — went slightly down after three months of cannabis treatment. At least as important, one in five subjects in the study, which was published in the European Journal of Internal Medicine, saw significant improvements in nighttime blood pressure.

“The mean differences in 24-hours systolic and diastolic blood pressures were 5.0 mmHg and 4.5 mmHg, respectively,” the researchers wrote.

That reduction in blood pressure is significant, researcher Dr. Ran Abuhasira told The Cannigma. It’s not enough of a reduction that it might be considered a treatment for high blood pressure on its own, he explained, “but rather something to consider as physicians while we review all the medications older adults are taking after prescribing cannabis for them.”

Another finding of the study was that the proportion of normal “dippers” — people whose blood pressure falls at night compared to during daytime hours — rose from 27.3% before treatment to 45.5% after treatment.

Patients with reduced dipping or whose blood pressure rises at night are at increased risk for cardiovascular complications, Dr. Abuhasira said. “Therefore, an increased percentage of dippers is better, suggesting balanced blood pressure and reduced cardiovascular risk from the standpoint of hypertension,” noting however that those are merely assumptions and extrapolations.

The team of six Israeli researchers set out to assess the medium-term effects of cannabis on hypertension and blood pressure, heart rate, electrocardiogram (ECG), and metabolic parameters.

Prior research has shown that the endocannabinoid system plays a role in regulating cardiovascular activity. In animal studies, researchers have noted that activating the endocannabinoid system can cause significant changes in heart rate, blood vessel constriction, inflammation, oxidation, and blood pressure — both increasing and decreasing blood pressure in different contexts.

No relationship between THC, CBD levels and blood pressure change

The current study did not find any evidence of a dose-dependant relationship between either CBD or THC and blood pressure. The researchers also posited that because chronic pain is associated with hypertension, the pain-relieving properties of cannabis could explain the reduction in blood pressure among most participants.

The participants were given a baseline evaluation including a 24-hour ambulatory blood pressure monitoring (ABPM), ECG, blood tests, anthropometric measurements, demographics, and medical history. Three months later, each participant was given a follow-up evaluation that looked at the same measurements.

While there was a reduction in both systolic and diastolic blood pressure, there were no significant changes in blood lipids, HbA1C, fasting insulin, C-reactive protein, kidney function tests, electrolytes, anthropometric measurements, or ECG parameters.

Would it work for people not taking blood pressure meds?

The study was limited in other ways as well. There was no control group nor were there measurements of actual levels of THC, CBD, or other substances in the participants. The sample size of the study may have been inadequate to assess cardiac arrhythmias and changes in metabolic parameters, the researchers noted. Finally, not all participants used the same types, doses, or formulations of cannabis. More research will be necessary to expand upon the findings of this study.

A 2008 review of existing literature found that chronic cannabis use was tied to lower blood pressure and heart rate overall.

Research looking specifically at CBD, while limited, suggests that it can lower blood pressure directly and reduce stress that can cause increases in blood pressure in the first place. Some researchers have even suggested that CBD may be helpful for treating hypertension.

Other studies have come to starkly different conclusions. An alarming — if limited — 2017 study found that “marijuana use may increase the risk for hypertension mortality.”

A systematic review of research from 2012 stated that “increased heart effort, elevated levels of catecholamine and carboxyhemoglobin in the blood, as well as the occurrence of postural hypotension are among the most commonly reported factors of cardiovascular disease associated with intoxication by cannabis.”

The study published this past week also cites a scientific statement put out by the American Health Association in August, 2020, which stated that “many of the concerning health implications of cannabis include cardiovascular diseases,” and that because polypharmacy is more common among older adults, there is a higher potential for drug interactions with cannabis.