Home Plant
The difference between hemp and cannabis
3 min read

The difference between hemp and cannabis 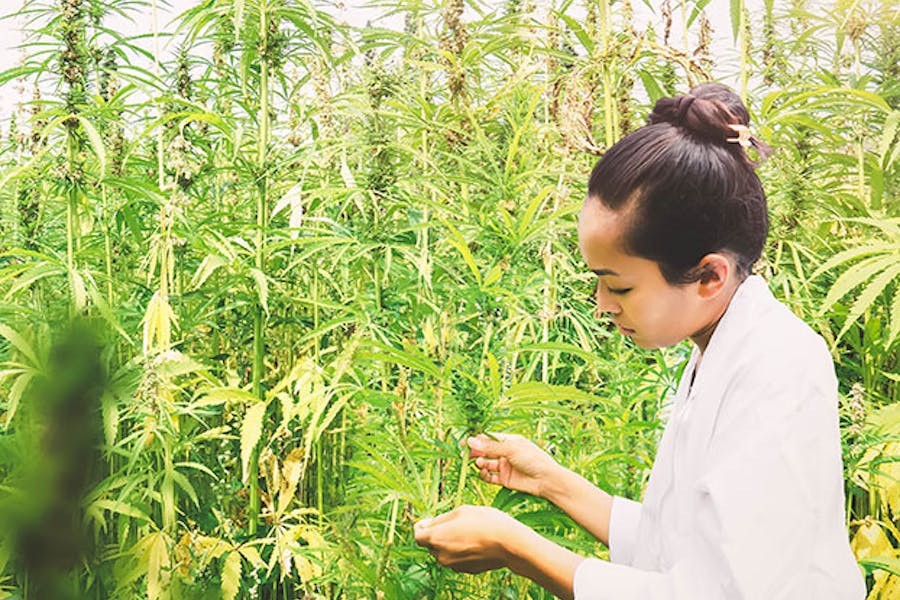 A woman examines plants in a cannabis field (Shutterstock)

The terms hemp and cannabis are often confused and misunderstood, particularly as cannabis and cannabis-derived products become more accessible and enter mainstream markets. Luckily, a little digging into the historical roots of the plant, mind the pun, makes everything a lot clearer. But if you’re looking for the short answer, it goes something like this:

Traditionally, hemp was primarily cultivated for its stalks, stems, and seeds. Hemp cultivation methods, therefore, tended to channel the most energy to the stalks. The result is that hemp plants grew taller and had fewer and smaller flowers, where most cannabinoids, terpenes, and flavonoids reside.

More recently, however, due to growing demand for CBD products, some hemp varieties are being cultivated to produce less fiber and more potent flowers.

It can be difficult, therefore, to make a clear morphological distinction between hemp and other cannabis varieties. One way we can distinguish them, however, is by their chemical profile:

Other Uses for Hemp

Hemp varieties of cannabis have been used in any number of industries throughout the ages. In China, paper and rope were made from hemp for millennia. Until the 19th century it was also used as a source of high quality canvas for ship sails.

Hemp can also be used to manufacture essential oils. Terpenes, which play an essential part in essential oils (yes, pun intended), are less abundant in many hemp varieties of cannabis. For that reason, Switzerland allows a higher amount of THC in industrial hemp grown there — to give farmers a competitive advantage in the essential oil market.

The standardisation of medical cannabis products is a fairly new concept. A growing number of countries with medical marijuana programs have implemented control systems — mostly based on the Good Agricultural Practices and Good Manufacturing Practices protocols — to ensure the quality and consistency of medical-grade products. That means cultivation is subject to strict oversight vis-a-vis pesticides, among other potential toxins, and requires laboratory testing to determine cannabinoid and terpenoid profiles.

Another important challenge for medical-grade cannabis products is ensuring they are stable, meaning any given cannabis product has consistent properties and effects over time.

Hemp-derived products usually don’t go through the same certification process and there is no standardization in the hemp-derived CBD market. One study examined 14 different hemp-derived CBD oils available in Europe, comparing the claims on their packaging with independent laboratory tests. Nine out of the 14 “had a concentration that differed notably from the declared amount.”

This article has been updated to more clearly reflect that both marijuana and cannabis have long been used to refer to the Cannabis sativa plant. Several graphics that were unclear have been removed until they can be redesigned.

See all
What are cannabinoids?
A guide to cannabis compounds
Cannabis ruderalis and its game-changing autoflowering trait
What are cannabis flavonoids?
Indica vs Sativa: Are they really that different?