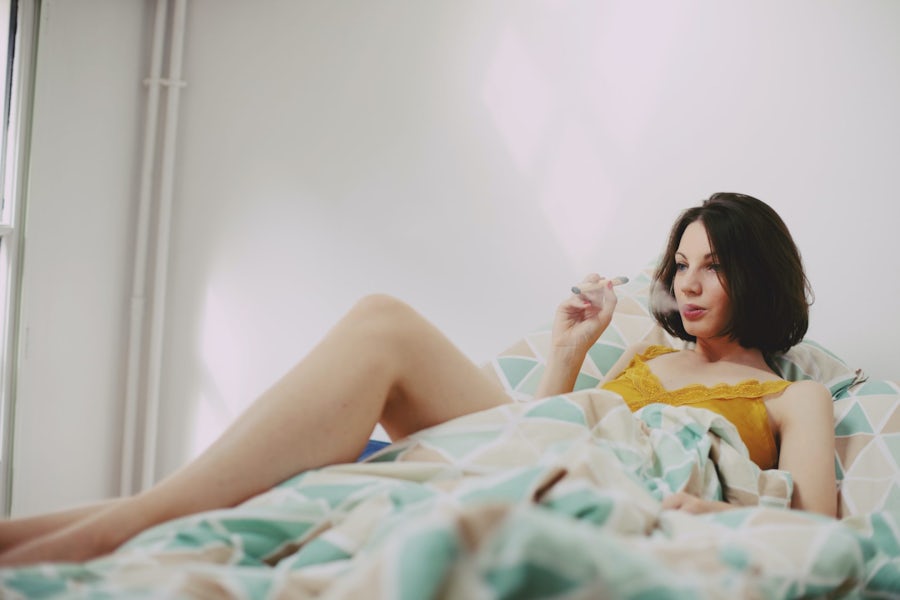 Cannabis, when mindfully blended with sex, can help ease away the tangible troubles of the world, making space for what is happening right before (Elsa Donald/Unsplash)

While female struggles with desire and arousal can sometimes end up at a diagnosis like Female Sexual Interest/Arousal Disorder (FSIAD) and treatments like drugs and hormones, these labels can frame women as “cases” to be approached methodically: problem, symptoms and medications. But for most women, sex doesn’t follow a linear path. 1 2

Sex and cannabis through the ages

Cannabis has a long history as an aid to increase sexual pleasure. It’s used as an aphrodisiac in tantric sex rituals arose in seventh century India, while early Europeans held the belief that the plant promoted happy marriages, according to the book, Cannabis and Culture, edited by Vera Rubin. Cannabis was included in the US Pharmacopeia from the late 1850s to the 1940s, with cannabis aphrodisiac pills and extracts made by pharmaceutical companies like Ely Lilly and Upjohn, recommended by physicians for “pleasant intoxication” and “stimulating the sexual appetite,” and to treat “sexual torpor” in women (in other words, lack of sexual desire.) 3 4

During the “Reefer Madness” era of the late 1930’s, the US Federal Bureau of Narcotics commissioner Harry Anslinger made wild claims that cannabis turned women into nymphomaniacs who sought “relations with Negros and entertainers,” and his racist, sexist rhetoric helped advance the criminalization of cannabis use and its designation as a Schedule I controlled substance. But thanks to the efforts of many activists and scientists over the decades, cannabis has been decriminalized and legalized in several countries, and is once again available to assist in medicinal and recreational use, including enhancing female sexual pleasure.

Cannabis products made for women, by women

The biology of a woman’s sexual response

Like a twin engine, a woman’s sexual response is composed of two parts: subjective arousal, when we’re emotionally turned on and in the mood — and physical arousal, when our body — especially our genitalia —  is likewise “up for it”. 5

After spending five years interviewing women about their sexual desires, sociologist Kathleen Rowland reported that the “pleasure gap” between men and women is  “neither medical malady nor psychological condition but rather a result of our culture’s troubled relationship with women’s sexual expression.”

The science of cannabis in the bedroom

Men and women differ in their response to cannabis, sexual and otherwise. While research is conflicting, some studies show that men who use cannabis found a lowering of their libidos. The effect is not the same for women, and many experienced just the opposite — their libido went up substantially. In a 2019 study published in Women’s Sexual Health, women reported improvements in the libido, pleasure and orgasm departments, thanks to cannabis. 6 7

Another paper in the Journal of Sexual Medicine concluded that moderate and low-dose cannabis enhanced sexual encounters, while chronic and high-dose use had the opposite effect. A review of 20 preclinical and human studies also confirmed that while adding weed into the mix does make sex more fun, a little goes a long way. 8 9

How does it work?

And there’s more: the demonstrated anti-anxiety, pain-relieving, and euphoric effects of cannabis can help kick mood-killing distractions from the boudoir. In other words, including a little weed in your romantic plans could make you feel less annoyed by aches, pains and anxious thoughts, and more hot and bothered.

But perhaps the most profoundly aphrodisiac quality of combining cannabis and sex might be what writer Michael Pollan calls “the importance of forgetting,” which he argues is as important as retaining memory. Recent research suggests the naturally-occurring neurotransmitter anandamide, an endogenous cannabinoid also known as “the body’s own marijuana,” helps to calm the stress response, lowers cortisol and ultimately, helps us erase traumatic memories. Cannabidiol (CBD) boosts the production of this trauma-soothing molecule, and THC mimics it, interacting with the same receptors. 12

Cannabis, when mindfully blended with sex, can help ease away the tangible troubles of the world, making space for what is happening right before us, so we might better partake of the tantalizing spread of sensual delights.

Building a relationship with cannabis

How does it feel to form a sexy triad between you, your sweetheart and cannabis?

Danielle Brand, author of the pleasure-affirming book, Weed Mom: The Canna-Curious Woman’s Guide to Healthier Relaxation, Happier Parenting, and Chilling TF Out, describes it this way:

“You know the medieval paintings of the saints, or the Virgin Mary,” she says, “with those glowing, golden orbs encircling cherubic heads upturned in prayer? That was me—only the glowy orb emanated from deep in my center and pulsed itself in unrelenting waves of hell yeahs through my entire body. Afterward, I felt positively weak with pleasure—like a pool of molasses or well-kneaded dough. Virgin, indeed.”

How to get started with weed for sex

So you want to give this cannabis sex potion a whirl but don’t know where to start?

First, it’s important to understand your specific needs. Which of these are you looking for:

Determining this will help you choose between intoxicating, THC-dominant cannabis,  non-intoxicating, CBD-dominant options, or perhaps a balanced ratio that combines the two.

While research has shown that women experience more pleasure when including cannabis in their sexy time, studies have yet to demonstrate the optimal cannabinoid ratios, strains and products for revving up your motor (and there’s no one-size-fits-all sex pot, anyway).

There’s lots of tried-and-true anecdotal reporting out there from cannabis-and-sex-loving women. Take it slow and experiment, noting sensations and what feels good to you. Here’s a guide to help you figure out what sex-enhancing cannabis product to start with:

While the old nomenclature of cannabis “strains”  falling into two categories — “indica” or “sativa” — is mostly outdated, the unique properties of an individual strain will influence how you’ll respond. These characteristics are a result of a plant’s biochemical “profile:” its percentage of cannabinoids (like CBD, THC, CBG and others) combined with flavonoids and volatile compounds called terpenes, all shown to induce a variety of physiological effects through interaction with the body’s endocannabinoid system (ECS).

Dispensaries in legal states typically require and post third-party lab test results of individual strains, though unfortunately most aren’t required to display terpene information. You can certainly go canna-geeky and investigate the properties of each terpene, then choose strains that contain those you want. Or, you can explore anecdotal reviews and go from there, experimenting along the way.

Names like Bluesexplosion, Sexxpot, Cannasutra and Purple Panty Dropper should give you a few clues.

Again, ask the dispensary to provide the profile; even among strains with the same name, variations in profile test results are common.

Choosing the right ingestion method from the candy store of possibilities will help you tailor your cannabis and sex experience to what is most pleasurable for you.

Lay on the lube

A few years ago, the slathering of weed oil over your privates was still considered fringe, but now it’s (almost) as ubiquitous as sliced bread, with many products — both CBD- and THC-infused — in the cannabis marketplace. While no scientific evidence has yet shown that putting cannabinoids on your lady parts can increase sensitivity and arousal, many women swear by it.

It’s important to note that most of these products are considered pre-lubes, meaning they are designed to be applied 20 minutes prior to the desired effects. When selecting a topical cannabis pre-lube make sure the formulation is edible and remember that most oil based formulations are not latex condom safe.

Ashley Manta, author of The CBD Solution: Sex, says topicals are a good intro to cannabis-infused sex play. “One of the most effective ways to enhance sexual pleasure is to apply infused topicals directly to your bits,” she says. “For CBD-only products, you’re likely to see more anti-inflammatory effects, while users of THC-containing formulas might notice increased blood flow, a feeling of warmth or swelling, and heightened sensations.”

Smoking and vaping flower is a quick and easy way to access the sensual properties of cannabis, but take note: less is more. Too much and your cannabis life-of-the-party can quickly become a party crasher. Newbies might start with CBD-rich varietals or a balanced CBD-to-THC flower and build from there, while seasoned consumers can jump right in.

For the most pronounced, long-lasting sensual body effects, nothing beats the right edible. But again, dip a toe in first if you’re never orally ingested cannabis before. It’s important to note that it can take anything from 45 minutes to over an hour for edibles to kick in, so keep that in mind before you decide to take another bite of whatever you’ve eaten. Gradual dosing is the key to finding the sweet spot.

Rather than chomping a super-potent gummy right before a date, try slicing an infused THC-rich chocolate into slivers and “microdose” it — you can always top up later with a hit from a vape. This will help with gradual dosing and help you get the best out of your edibles experience.

Inviting cannabis into the intimate world of our sexual desires is not only about our choices of cannabinoids, strain or product, though they can all be helpful. It’s also about giving yourself the permission to explore sex in all the ways that inspire you, to play and have fun, and to share it all with another, or enjoy it on your own — it’s your choice. As with all substances and sex, it is important to discuss ground rules and consent with your partner prior to consumption.