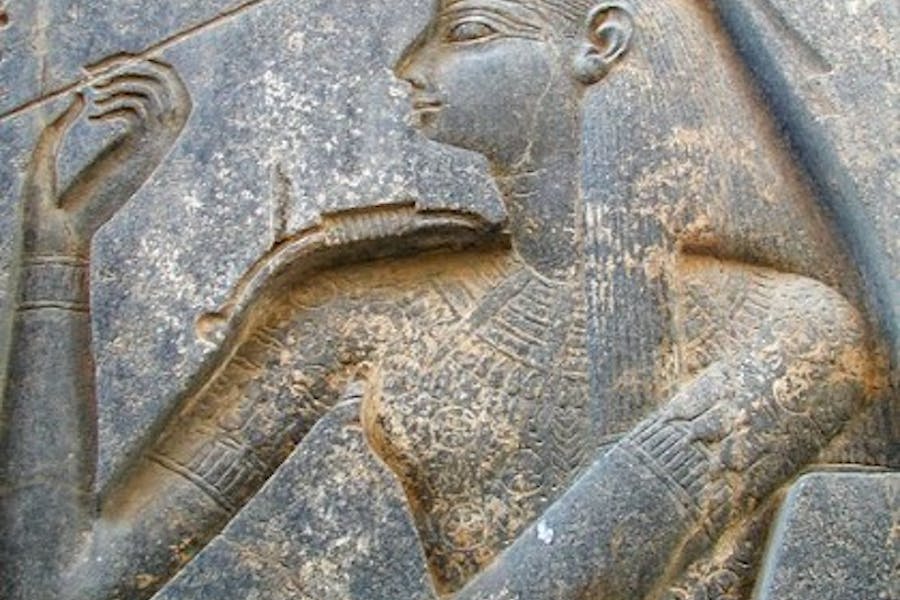 In Egypt, medical cannabis use goes back for millennia.

And while many different early cultures cultivated cannabis, the ancient Egyptians exemplified a truly holistic use of the plant. It’s even possible that cannabis — Egyptian hieroglyphs called it shemshemet — became popular before the great pyramids were built.

Egypt’s historical use of shemshemet appears twofold. On one hand hemp may have been used for fiber and textile; on the other hand, the more psychoactive components of cannabis may have been used medicinally. Though many sources today appear authoritative in their claims that the ancient Egyptians used hemp for this and cannabis for that, a closer inspection of the evidence is needed.

Let’s take a trip back through Egyptian history, beginning around the year 3,000 BC.

While the exact timeline is less than crystal clear, cannabis was likely used in ancient Egypt as many as 5,000 years ago. Some speculate that depictions of the Egyptian Goddess of writing, Sheshat, are brimming with cannabis-inspired themes. In many paintings, she’s shown with a star-shaped leaf atop her head and a fibrous rope in her hand. Was Sheshat’s creative ability courtesy of some help from hemp? It’s a fun theory, but let’s move on to more evidence-based examples.

First, it’s important to understand the context in which Egyptian medicine found itself. The culture’s understanding of the human body was far ahead of its time, and, relatively speaking, extraordinarily advanced. Although the ancient Egyptians preceded Pasteur’s germ theory by thousands of years, they nonetheless placed a great value on cleanliness and sanitation. And customs like embalming added to the Egyptian’s understanding of how the human body worked.

This same medical knowledge lent itself to the extensive use of medicinal plants. At first, this usage blurred the lines — merged them, even — between science and religion. As Egyptologist Barbara Watterson notes, “the earliest ‘doctor’ was a magician, for the Egyptians believed that disease and sickness were caused by an evil force entering the body.” Thankfully, plant-based incantations seemed to be a perfect cure.

Soon enough, cannabis was discovered as among the best and most powerful of these plant-based preparations. Its dual psychotropic and healing properties likely made cannabis popular among the dual doctor-magicians of ancient times. And while it’s unclear exactly when cannabis use became mainstream, the plant’s residue has been found in Egyptian artifacts dating back to more than 4,000 years ago.

Around 2,000 BCE, cannabis salves were used to treat eye sores and glaucoma. Today science has proven what the ancient Egyptians learned through centuries of experience: that cannabis is a potent anti-inflammatory which reduces intraocular pressure. Another Egyptologist, Lise Manniche, notes in her book An Ancient Egyptian Herbal that several texts dating back to the 18th century BCE encouraged readers to “plant medicinal cannabis.”

It’s now fairly common knowledge that Egypt was a pioneer in the development of papyrus and parchment papers. With these scrolls came the culture’s ability to write and document — and our ability to take a glimpse into their world. Papyri covering everything from legal topics to mythological tales to medical records have been found, and naturally, the medical papyri sometimes mention cannabis.

The Ramesseum Papyri | According to The British Museum, the Ramesseum Papyri “have been described as the ‘most precious single find of papyri’ from pharaonic Egypt.” As one of the oldest medical records ever discovered (circa ~ 1750 BCE), it’s likely these tales reflect a cumulative buildup of the healing techniques of even earlier generations.

The Ramesseum Papyri get their name from their origin: the ancient city of Ramesseum. Researchers have uncovered countless other gems from this Ramesses II-built city, nearly all of which points to the era’s educational prowess.

The Papyri themselves point to this, too. They include information about childhood illness, anatomy, recovery from volcano-induced injuries, and the birthing process. Plate A26 of the Ramesseum III Papyrus describes this treatment for the eyes: “celery, cannabis is ground and left in the dew overnight. Both eyes of the  patient are to be washed with it in the morning.” Could this have been an effective early THCA therapy?

The Ebers Papyri | This remarkable collection of papyrus scrolls is the world’s oldest complete medical book. Written around 1500 BC, it describes its era’s most popular medicinal remedies. The Ebers Papyri gets its name from botanist George Ebers, who obtained it in the late 1800s. Like many others in his field, Ebers was understandably interested in gleaning whatever he could from the ancients. And with 700 medical and magical formulas spanning 110 pages, it seems there’s a lot to glean.

A formula for feminine health is as follows:

Formula No. 821: Shemshemet (i.e., cannabis) was to be “ground in honey; introduced into her vagina to cool the uterus and eliminate its heat.”

Another cannabis-based formula for “a painful finger or toe” is effective enough that physicians are instructed to encourage their patients — “you must say to this patient: ‘A problem that I can treat’.”

The Berlin Papyri | This slightly newer scroll (circa ~1,300 BCE) points towards the evolution of cannabis as medicine. It wasn’t just good for eye problems, feminine issues, or inflamed extremities — cannabis could be used to treat fever and inflammation too.

The papyri’s 81st formula shows that cannabis was prescribed as an “ointment to prepare for driving away the fever.” Today, modern medicine has made these same anti-fever, anti-inflammatory qualities abundantly clear.

The Chester Beatty Papyri | Also written around 1,300 BC is the Chester Beatty papyri. This artifact is geared mostly towards treating colorectal diseases. It likely mentions shemshemet at least twice and prescribes the plant’s crushed seeds as a valuable cure. There are even instructions on the use of cannabis suppositories for digestive purposes.

Overall, examples of cannabis use within the papyri records are somewhat sparse. But the ones that are present are also very telling. As Dr. Ethan Russo quotes in a 2007 publication in the Journal of Chemistry and Biodiversity, “as a drug, it [cannabis] has remained in active use ever since pharaonic times. It does not appear very often in the medical papyri, but it was administered by mouth, rectum, vagina, bandaged to the skin, applied to the eyes and by fumigation.”

Egyptian pharaohs may have used cannabis for more ceremonial purposes, too. The remains of Ramses the Great (Pharao in 1213 BCE) contain traces of cannabis, as do the remains of other mummified Egyptians. In the 1990s a series of studies from Nerliche, Parsche, and Balabanova reported this surprising find. Nerliche’s study noted that mummies had a significant deposition of tetrahydrocannabinol (THC) and concluded that this was likely obtained through cannabis smoke. As you might imagine, these studies were very controversial when they first came out.

As time went on Egyptian use of medical cannabis continued to develop. By around 1,000 BC, it seems as though even Egypt’s common people had caught on to the plant’s potential benefits. Unfortunately, though, there is relatively less historical data on cannabis use during this time period.

Cannabis as a medical remedy?

Could the ancient Egyptian’s understanding of cannabis have trickled down to adeptness in other areas related to health and the body? Perhaps. In his epic work The Odyssey, Homer notes that “everyone in Egypt is a skilled Physician”. Everyone, in this case, even included women — which was a very rare allowance in those times. Indeed, some of Egypt’s first doctors were women prized for their caregiving; other women were skilled as midwives.

A final papyrus-written record surfaced around 200 AD: the Vienna Papyri. This one appears to mention cannabis as a treatment for tumors, ear pain, and fevers. In some instances, the Vienna papyri recommend using acacia and cannabis in conjunction. Though not truly ancient, this one distills down information gathered from prior time periods.

Translation difficulties make coming to a full knowledge of the Egyptian’s medical cannabis use challenging, though researchers like Dr. Greg Gerdeman agree that ancient mentions of shemshemet most definitely refer to cannabis. What can be said with full confidence is that the ancient Egyptians were leaders in the medical world of their era — and they attained this leadership through devotion to medicinal plants like cannabis.

It’s likely that practical lessons can be learned from their devotion, too.  Perhaps Dr. Russo’s review said it best: “information gleaned from the history of cannabis administration in its various forms may provide useful points of departure for research.” In the future, the wisdom of the ancient Egyptians may truly come full circle.