Home Research
What is crossfading and what are the risks?
6 min read

What is crossfading and what are the risks? 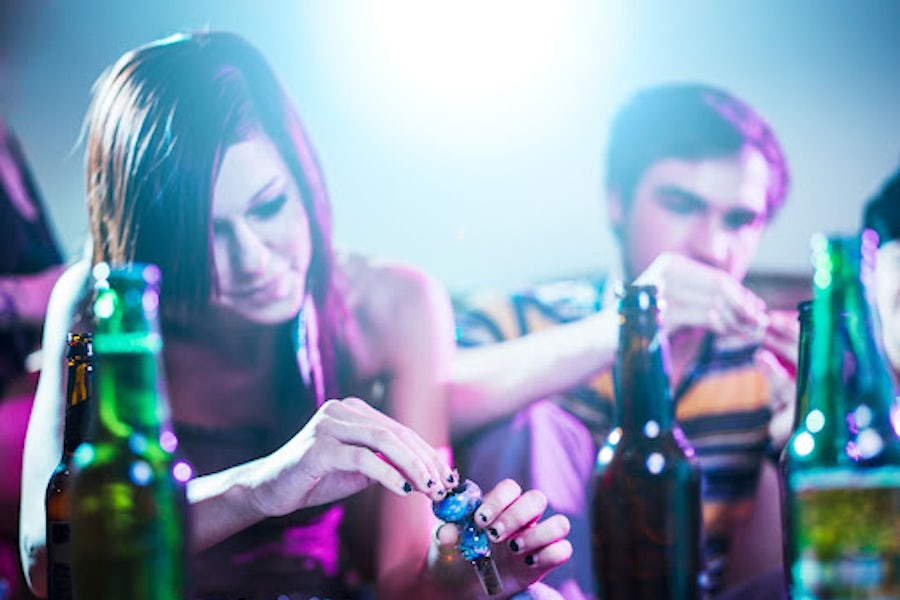 The mixture of bongs and beers is very common at a lot of college parties - but how harmful is the mix really? (Shutterstock)

Purposely mixing alcohol and cannabis together—or crossfading—is a very common party trend among young adults. Even though it’s a very popular practice, it also comes with some big risks, and can be downright uncomfortable. Learning about how this combination may affect you can minimize the risks and help you enjoy the effects of both substances.

What does crossfaded mean?

The term crossfaded generally refers to the effects of combining cannabis with alcohol and is a relatively well-known slang term. In one study of about 900 young adults in Seattle Washington, for example, 87% of participants had heard of crossfading and 43% described being crossfaded as simultaneous alcohol and cannabis use. However, 25% went even further, specifying that just using both substances wasn’t enough; to be crossfaded you needed to use enough to be both drunk and high at the same time. 1

Interestingly, while more than half (60.4%) of the alcohol-consuming participants reported that they had been crossfaded, many (59%) reported that it was not a desirable state. Only a small portion described crossfading as moderately (13%) or very desirable (5.2%). Many young adults in the study also felt that becoming crossfaded was moderately (45%) or very risky (33.1%).

Still, despite young adults’ belief that crossfading is risky, it remains very common. For example, some studies have found that those 18 and up, who use both alcohol and cannabis, are more likely to use both at the same time. This is particularly true for young men, non-college students, and more frequent users of cannabis or alcohol, who are all more likely to become crossfaded and who commonly rate it as being less risky. 2

How do you get crossfaded?

Getting crossfaded happens when someone consumes both cannabis and alcohol, leading to physical effects that are different and/or more intense than would occur for either substance alone. Sometimes this can be a surprise to the person who is getting crossfaded, if they have never used both substances simultaneously. For someone who regularly drinks or uses cannabis, they may be used to functioning with a certain amount of each. But when taken together, the effects become magnified or even altered, leading to much less functional states than expected.

How does being crossfaded feel?

The mixture of cannabis and alcohol comes along with the same kind of disorienting effects you might expect from using either one alone. For examples, alcohol can:

On the other hand, cannabis can also impact cognition, energy and coordination, so when taken together these effects can really compound each other. 3

But it’s not just that these effects are doubled. The combination of the two can create effects you might not get with just one alone. Simultaneous use is associated with the following:

In fact, this combination is so sedative, disorienting, and numbing that it was used as general anesthesia for surgeries as far back as 400 BC. 4

How long does it last?

You might think that being crossfaded lasts as long as being drunk or high, but it can actually last a bit longer. A 2010 study found that alcohol actually extended the half-life of THC in the blood, which could mean a longer-lasting high, though the size and significance of this effect is not yet clear. 5

The effects of mixing weed and alcohol

Crossfading, on the loosest definition is just mixing weed and alcohol. But on its strictest definitions, using very small amounts (such as using a small amount of an alcohol-based cannabis tincture) wouldn’t be considered crossfading, since it would not lead to them being both drunk and high. Still, it’s important to understand what happens whenever you mix cannabis and alcohol together.

Mixing cannabis and alcohol comes with many of the usual effects of alcohol, and those of cannabis. Since many of these effects are similar, like mental confusion, coordination issues, sedation, and difficulty thinking clearly, these effects can become magnified. But even more than this, the interaction changes the way the body metabolizes each compound, which leads to even more intense results.

At a chemical level, the alcohol actually magnifies the effects of THC. In one study, subjects who smoked cannabis while drinking alcohol actually had higher levels of THC in their bloodstream than those who smoked cannabis in the same amount. So simply adding alcohol can lead to a much more potent high. Interestingly, THC and CBD are both able to bring down blood alcohol levels – but unfortunately, this doesn’t seem to lessen alcohol’s more disorienting effects. 6 7 8

Some protective benefits for drinkers

While crossfading can be risky, for those who can moderate their consumption to avoid disorienting impacts, cannabis may have some protective benefits for alcohol drinkers. One study looking back at the medical records of alcoholics found that those who used cannabis while drinking had significantly lower numbers for alcoholic liver disease.

Those who used cannabis had:

These protective benefits increased when more cannabis was used. Still, increasing THC may cause negative side effects when drinking, so it’s important to note that CBD has also been found to lower alcoholic liver disease in drinkers, with far fewer side effects. 9

Despite the potential benefits for the liver of adding cannabis when drinking, the practice can be dangerous as well. Multiple studies show driving while crossfaded comes with an increased risk of car accidents. 10 While cannabis can moderately impair driving and alcohol can have even more severe impacts, the combination can potentially double the risk of accidents from just alcohol alone.

Even if you don’t get behind the wheel, crossfading can also double the likelihood that you have social impacts or harm yourself in other ways. It can also lead to other physical impacts, such as:

How to sober up from being crossfaded

If you do find yourself crossfaded, and learn first hand why so many young adults say it is not a desirable state, there are a few common tips on how to sober up. Some popular tricks include:

These may help you to feel more alert and functional. Still, while these may help perk you up so that you don’t feel as crossfaded, they won’t actually lessen the amount of cannabinoids or alcohol in your bloodstream.

Interestingly, CBD may be a good treatment for being crossfaded, despite being a component in cannabis. Studies show both that CBD can lower the amount of alcohol in your bloodstream, and that it can reduce the psychoactive effects of THC by interfering with its ability to bind to cannabinoid receptors. CBD can even reduce the stress the alcohol puts on your liver. 11 12 13

Still, this likely won’t completely get rid of your crossfade – so the safest thing to do is to avoid driving, find a safe place to rest, drink plenty of water, and sleep it off. And of course, if you think you may be suffering from alcohol poisoning, call for medical help immediately.

How to How to tell if your cannabis is laced
Previous Article What are cannabis landrace strains? Next Article Is cannabis withdrawal real and how can it affect you?
The Cannigma uses cookies to improve your experience and to show you personalized adsACCEPTPrivacy Policy
Manage consent