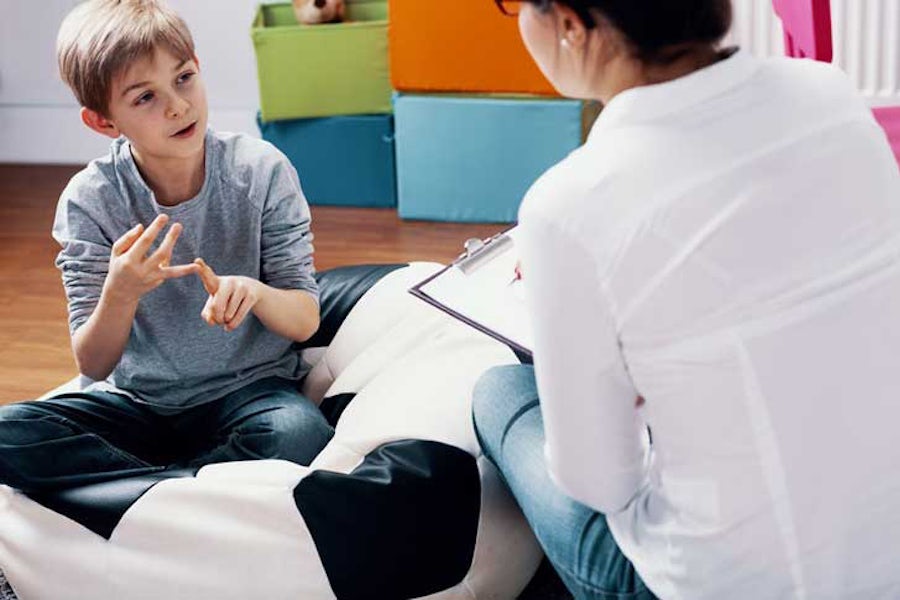 A child is examined by a psychologist. (Katarzyna Białasiewicz/123rf)

The children of mothers who use cannabis after they find out they are pregnant may be at a small, elevated risk of developing psychopathology during childhood, including psychotic-like experiences and social problems, according to a new study.

The report, published in Psychiatry last month, sought to determine if prenatal exposure to cannabis is associated with any significant child health outcomes. According to the researchers, their cross sectional analysis of 11,489 children (mean age 9.9) — 655 of whom were exposed to cannabis prenatally — found that “prenatal cannabis exposure after maternal knowledge of pregnancy was associated with greater psychopathology during middle childhood, even after accounting for potentially confounding variables.”

The researchers determined that “relative to no exposure, cannabis exposure only before (413 [3.6%]) and after (242 [2.1%]) maternal knowledge of pregnancy were associated with greater offspring psychopathology characteristics (ie, psychotic-like experiences, and internalizing, externalizing, attention, thought and, social problems), sleep problems, and body mass index, as well as lower cognition and gray matter volume.”

The increases were very small, but deemed statistically significant by the researchers.

“Use of cannabis despite knowledge of pregnancy might represent a preexisting and more severe form of cannabis use,” according to the researchers.

They also stated that the findings indicate that cannabis use during pregnancy should be discouraged, and cite figures indicating that from 2002 to 2017, past-month cannabis use among pregnant US women increased from 3.4% to 7%.

The researchers used data from the Adolescent Brain and Cognitive Development Study, which recruited 11,875 children aged 9 to 11 from 22 locations between 2016 and 2018. The study looked at a wide range of health conditions in the children, ranging from psychopathology to cognition, sleep, birth weight, body mass index, and brain structure, to name a few. The children measured in the study were split into three groups: no exposure to cannabis, exposure after maternal knowledge of pregnancy, and exposure only prior to maternal knowledge of pregnancy.

According to the researchers, because Tetrahydrocannabinol (THC) crosses the placenta and interfaces with the endocannabinoid system — which is associated with neural development — “it is plausible that cannabis use during pregnancy may relate to outcomes in offspring.”

That said, the researchers stated that animal models suggest that cannabinoid receptors, which are “critical for THC’s impact on the developing brain are not expressed before the equivalent of 5 to 6 weeks’ gestation in humans.” This would potentially indicate that those mothers who continue to use cannabis after they are aware that they are pregnant are more likely to expose their children to risk.

A wide range of tests were used to gather the data for the study, including the Prodromal Questionnaire-Brief Children Version, which assess child-reported PLEs, The Child Behavior Checklist, The National Institute of Health ToolBox Cognitions Battery-Total Cognitive Composite, and The Sleep Disturbance Scale for Children.

The covariates in the study were numerous. They included race/ethnicity, first-degree familial history of psychopathology, prenatal exposure to tobacco or alcohol before or after maternal knowledge of pregnancy, and household income, among others.

There were also a number of limitations to the study which the researchers acknowledged. For one, many of the parents and caretakers reported retrospectively on cannabis use that occurred around a decade earlier, which could produce flawed or biased results. Second, the Adolescent Brain and Cognitive Development Study only included a small number of participants that were exposed to cannabis. There is also a range of familial, pregnancy-related, and child-related confounding variables that the researchers were not able to measure.

They also surmised that prenatal cannabis exposure “may serve as a proxy for exposure to a permissive home environment that promotes externalizing behaviors and related cognitive disengagement,” in children.

Finally, the study that the researchers used included only limited or no data on potency, frequency, timing, or quantity of cannabis exposure among the mothers. There is no indication in the report if the mothers used high-THC products, if they used other forms of cannabis (like hemp and CBD products), what methods they used to consume cannabis (smoking, dabbing concentrates, edibles, etc.) and how often they consumed marijuana — or how much.

The research was published a few months after two studies that noted an increase in the use of cannabis among pregnant women after it becomes legalized. One study published in May found that the percentage of pregnant women who tested positive for marijuana at their initial pregnancy intake at a California clinic increased from 6% to 11% after recreational marijuana legalization went into effect in California on January 1, 2018. Another study published in February looked at 7,258 women in three legal adult-use cannabis states and found that “women who resided in states with legalized recreational cannabis were significantly more likely to use cannabis during the preconception, prenatal, and postpartum periods,” than those in states without legalized recreational cannabis.

In August, a study published in Nature Medicine found that the incidence of autism spectrum disorder diagnosis was 4 per 1,000 persons among children exposed to cannabis in the uterus, compared to 2.42 among unexposed children. At least one expert cautioned that more research is needed to establish a clear link.

On the other hand, a review published in June looked at decades of research into the use of cannabis during pregnancy and found that the evidence “does not support an association between prenatal cannabis exposure and clinically relevant cognitive deficits.”

Regardless of the potential risks, a state-wide study in Colorado found that 69% of cannabis dispensaries recommend customers use cannabis to treat pregnancy sickness in the first trimester.

In August 2019, United States Surgeon General Jerome Adams urged pregnant women not to use cannabis, though his warning appeared to be based in part on the higher potency of today’s marijuana. In addition, the official position of the American College of Obstetricians and Gynecologists (ACOG) is that pregnant women or women considering becoming pregnant should discontinue marijuana use. The ACOG also discourages breastfeeding while using marijuana, though they did note that there is insufficient data to evaluate the effects on infants.

Previous Article Cannabis science’s biggest names, on one stage Next Article ‘We will decriminalize marijuana,’ kamala harris vows in vp debate
The Cannigma uses cookies to improve your experience and to show you personalized adsACCEPTPrivacy Policy
Manage consent