Finally, WiFi you can count on. White Fire OG, also known as WiFi OG or simply WiFi, is an indica-dominant hybrid known for high THC levels and energetic and cerebral effects that can be perfect for streaming whatever the day throws your way. It’s also just a good-looking strain, with tight buds covered in a snowy frosting of trichomes. Time to plug in your router, and check how this WiFi works. 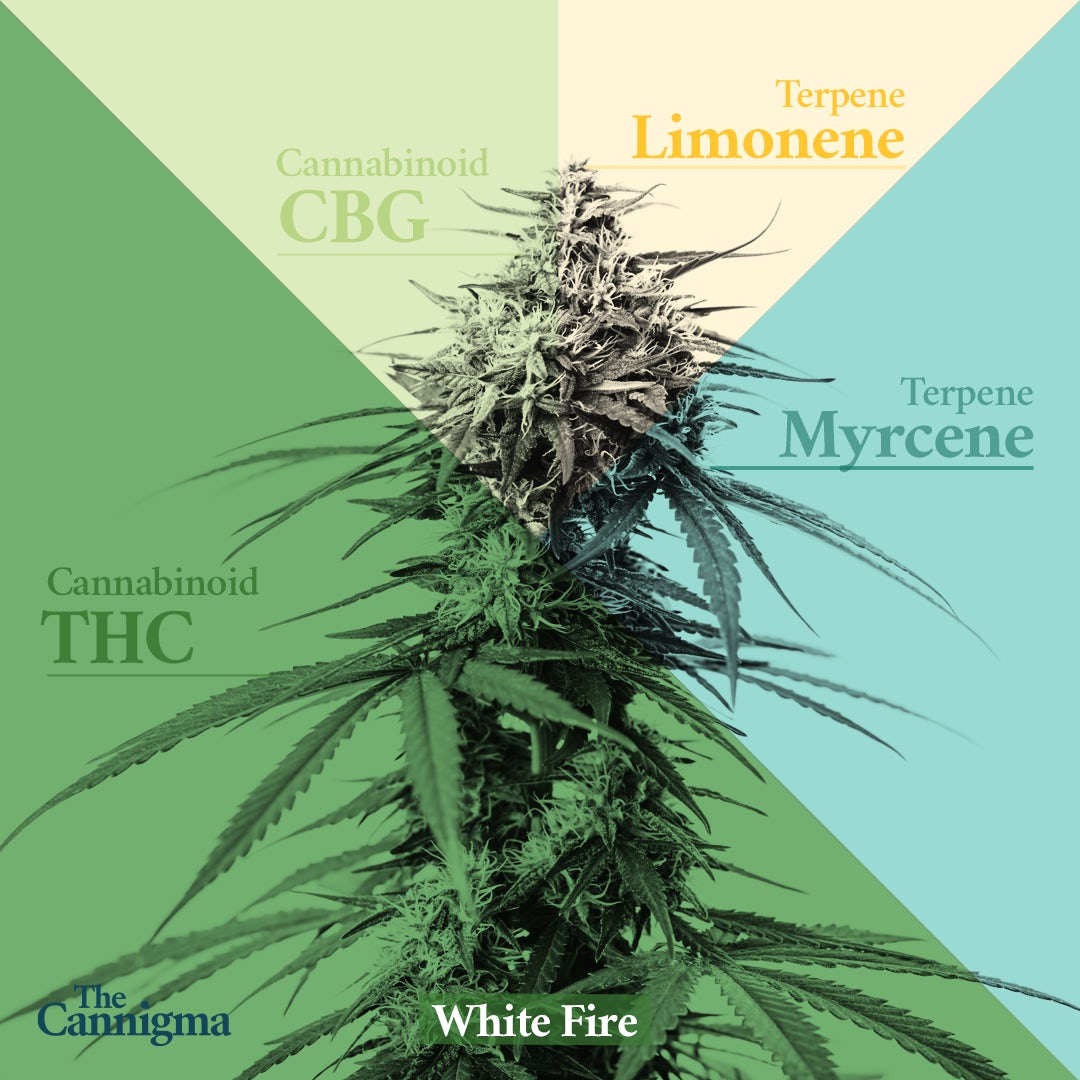 Weedmaps, Hytiva, and a number of other sources credit the team at OG Raskal Seeds in Southern California with crafting White Fire OG, which is said to be a cross of the White and Fire OG (also known as Fire OG Kush).

A Seedfinder post credited to OG Raskals states that “the famed fire OG kush clone we brought to the community we hit with the reversed White clone only male pollen to create another legend.”

Westword describes WiFi OG as combining the best of both of its parent strains, including “the White’s fertile resin-gland production and Fire OG’s tart, earthy flavors.”

Despite its often high THC levels, Westword describes the high of WiFi OG as somewhat less than stupefying, adding that “newbies can roll with it just fine if they start small.”

The high is often described as cerebral and euphoric, though the upbeat vibe is tempered somewhat by its OG Kush genetics. Regardless, it’s a well-balanced hybrid that can work great both in the daytime and at night, and which always delivers, even if you’re far from WiFi coverage.

The aroma of White Fire OG is typically described as diesel and slightly citrus, with pine at times as well. The taste is described as ranging from citrus to sweet and musky, and it’s known for being less than subtle, and the type of weed that stays in the mouth well after the joint is passed.

The look of White Fire OG is evoked somewhat in the name — white, frosty trichomes cover its dense, dark green buds, begging to go up in flames.

The chemical profile you see below is an average of laboratory tests for products called “White Fire OG” — so it’s just an estimate of what you might find when you buy White Fire OG weed. The aggregation shows an average THC level of 19%, and high myrcene (0.73%) and limonene (0.47%) levels.

Caryophyllene 0.29%
* The numbers in the tables are averages of data from multiple resources
** Terpenes are of pharmacologic interest at concentrations above 0.05%

How White Fire OG affects you

But really, marijuana affects people in different ways. The two main factors are your own biology (your endocannabinoid system, metabolism, age, weight, etc). and the product you choose (including its cannabinoid and terpene breakdown, and the delivery method used).

White Fire OG can be grown both indoors or outdoors and can produce a quite sizable yield. Indoors White OG has a flowering time of around 9-10 weeks, and outdoors it should be ready to harvest in October.

White Fire OG is considered a moderately-difficult strain to grow, largely because it grows very bushy, requiring regular pruning and careful attention to the humidity level so that mold doesn’t develop.

It prefers a dry and warm (70-85 degrees Fahrenheit) climate, and ventilation is key to make sure it stays dry.

White Fire OG is most often described as a cross of Fire OG and the White. Fire OG’s parent strains are listed as SFV OG Kush (a cross of SFV OG and OG Kush) and OG Kush. The White is an indica-dominant hybrid known for its heavy trichone covering.

White Fire OG combines this heavy resin production with Fire OG’s flavors and high potency. It can be confused with White Fire Alien OG, an OG Raskal strain bred by crossing the White with Fire Alien Kush (the latter being a mix of Alien Kush and Fire OG).