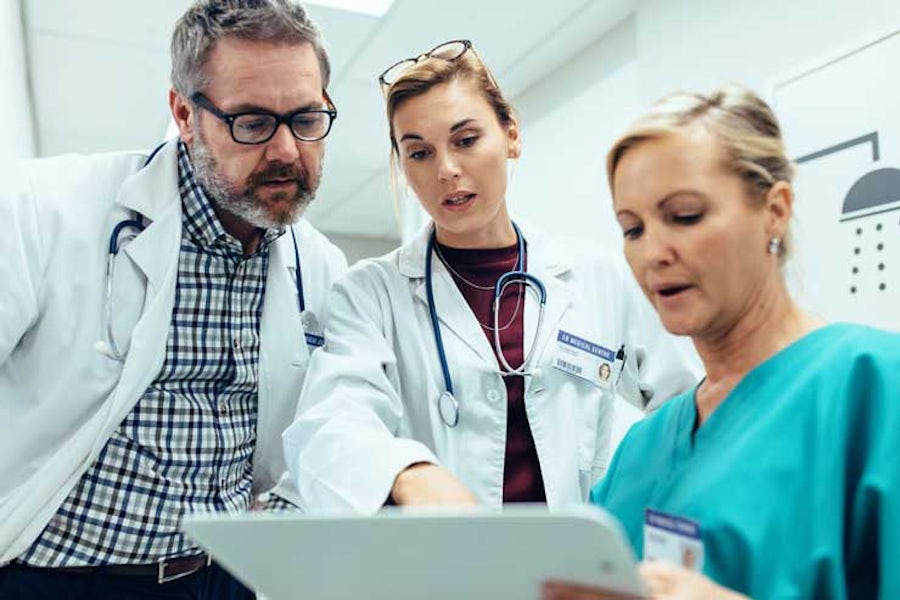 Doctors consulting about a patient. (ammentorp/123rf)

Most healthcare professionals treating cancer patients do not have the knowledge they need to make recommendations about medical marijuana, according to a recent study, indicating that education about cannabinoid medicine is still sorely lacking.

The researchers found that more than two-thirds (69%) of the oncology practitioners had spoken to patients about cannabis in the preceding month and 84% believe they lack sufficient knowledge about cannabis to make recommendations. The survey did not specifically ask whether the healthcare professionals had knowledge about the endocannabinoid system.

In addition, 69% of the respondents reported feeling “not at all prepared” to monitor the use of cannabis by their patients. The researchers did note that younger respondents tended to have more knowledge about cannabis.

The most commonly reported barriers to knowledge included how to monitor the patient’s use of cannabis (54%), prescribing an accurate dose (61%) or strain (53%), and having insufficient research (50%) about cannabis.

Only 39% agreed with the statement that “cannabis is a useful supplement to some conventional medications” and 48% said they agreed that cannabis could be used in addition to existing cancer treatments.

Almost one in four stated that they had asked a patient to stop using cannabis in the preceding month, mainly because of “evidence or literature about interaction or harm, theoretical concerns about interactions with other medications, and no evidence of efficacy.”

Only 23% reported being “knowledgeable” about the role of medical cannabis in symptom management.

The researchers found that 75% of the 103 healthcare professionals who took part were women, and 40% were oncology nurses.

The goal of the study was to assess “the barriers encountered by health care providers with respect to medical cannabis and their preferred practices in this area.”

Uncertainty and lack of education

Part of the problem may also be the lack of precise effect specification when it comes to medical cannabis. The researchers state “other [healthcare providers] have indicated that the lack of well-defined effect specifications exposes patients to a wide range of experiences when using medical cannabis, rather than to a well-defined and controlled pharmacologic effect.”

This, coupled with uncertainty about the side effects or health risks, creates a challenging situation for HCPS, according to the study.

“Given the rapid pace at which cannabis has been legalized and adopted by various patients, physicians and other HCPS [healthcare providers] are challenged about how to knowledgably address questions, provide professional recommendations, and confidently authorize medical cannabis,” the researchers wrote.

By and large, it is common for healthcare professionals to not receive sufficient training or education regarding the use of cannabis either in medical school or during residency, or even about the endocannabinoid system itself.

The endocannabinoid system is an important biological system involved in regulating many critical processes in the body. Phytocannabinoids (plant-derived cannabinoids) in cannabis, such as THC and CBD, can interact with the cannabinoid receptors present in cells throughout the body.According to a recent nationwide US survey published in Drug and Alcohol Dependence, 84.9% of physicians-in-training reported receiving no education in cannabis during either their residency or their studies in medical school.

Previous Article Does marijuana make you lazy? Not quite, say scientists Next Article ‘Disruption to the status quo spells an opportunity for cannabis’
The Cannigma uses cookies to improve your experience and to show you personalized adsACCEPTPrivacy Policy
Manage consent