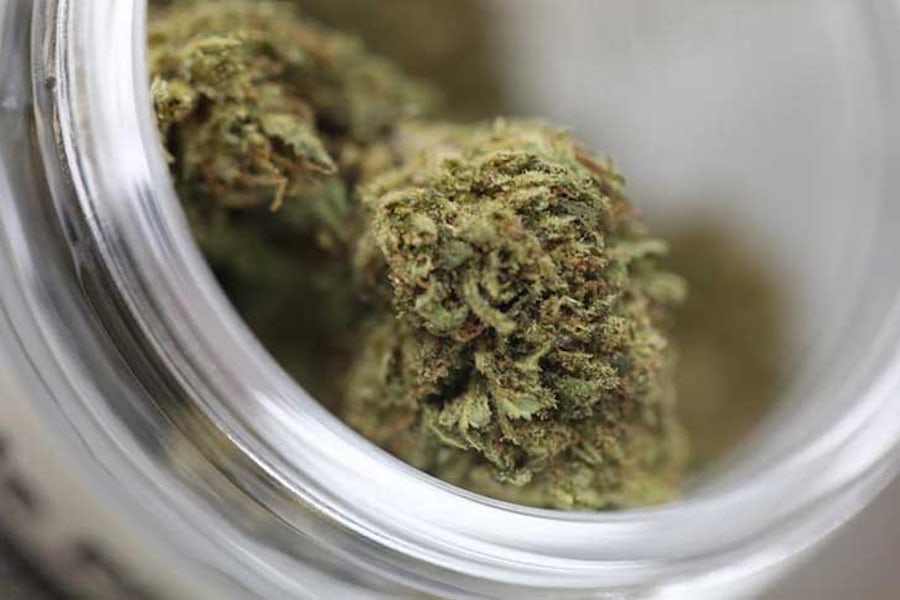 Medical marijuana in a jar. (The Cannigma / Anthony Travagliante)

Led by scientists from the University of Texas Southwestern and published in Cell, the new study details how an increased production of these endocannabinoid molecules in mice effectively protected the animals from the more extreme symptoms of gastrointestinal infection.

The researchers say their findings could help to explain why cannabis use is often reported as helpful for various bowel conditions, and could eventually led to new methods of fighting gastrointestinal infection in humans.

Discovered in the early 1990s by scientists researching THC, the endocannabinoid system (ECS) plays a large role in the action of the central nervous system and in the body’s response to various endogenous and environmental factors.

However, outside of cannabis use, the ECS is modulated by endocannabinoids produced naturally by the body. The two principle endocannabinoids, 2-arachidonoylglycerol (2-AG) and anandamide (AEA), are generated by the body when needed and act on the cannabinoid receptors to ensure the ECS is functioning properly.

In recent years, closer research conducted on these compounds and the wider endocannabinoid system has highlighted the area as a potential therapeutic avenue for pain, inflammation and immune response, and even pathological conditions such as multiple sclerosis and Alzheimer’s disease.

In the new study, the UT Southwest researchers looked at mice which had been genetically altered to overproduce the endocannabinoid 2-AG in various organs, including in the intestines. In order to study the effects of this endocannabinoid on host susceptibility to infection, the researchers then exposed the genetically altered mice, along with a group of unmodified littermates, to three different bacterial pathogens.

The first pathogen of interest studied was Citrobacter rodentium, a pathogen that attacks the colon in rodents and causes extensive inflammation and diarrhea. While there have been no reported cases of C. rodentium in humans, this pathogen is the only known attaching and effacing pathogen to naturally infect mice, and so it is a very useful model for understanding the pathogenesis of other human pathogens, such as Escherichia coli (E. Coli).

The researchers observed that the mutated mice only developed mild symptoms associated with C. rodentium infection, compared with the extreme gastrointestinal distress experienced by the unaltered littermates. Further examination of the mice colons also revealed that the mutant mice had markedly lower levels of inflammation and signs of infection. These mutants were also seen to have significantly lower loads of C. rodentium in their fecal matter and recovered from the infection days faster than the control group of littermates.

Going a step further, the researchers repeated the experiment using unmodified mice that were this time given a drug which raised levels of 2-AG in the body. These mice also displayed similar positive health benefits from the increased 2-AG.

In attrition to being effective against C. rodentium, the research team also found increased 2-AG levels were able to limit infection with Salmonella typhimurium, a bacterial pathogen that causes gastroenteritis in humans, and in mice can cause symptoms resembling typhoid fever.

Similarly, increased 2-AG levels were able to effectively impede the spread of enterohemorrhagic E. coli (EHEC). This particular form of E. coli is the one most commonly seen in humans and causes severe intestinal infection. Unlike other E. coli pathogens, EHEC can also produce an extremely potent toxin known as Shiga toxin, which attacks the lining of the intestinal wall.

In addition to the mice model studies, the researchers also treated mammalian cells in petri dishes with the bacterial pathogens. They noticed that when they applied a drug inhibiting 2-AG production in the cells, the cells became more susceptible to bacterial infection – an observation that further supported the importance of endocannabinoid signaling to infection.

Seeing the effects of 2-AG on the mice and the cell cultures, the UT Southwestern team began to examine exactly how the endocannabinoid was influencing the body. They found that the molecule was able to block a specific bacterial receptor, known as QseC.

When the QseC receptor senses the host signaling molecules epinephrine and norepinephrine, it triggers the molecular cascade necessary to establish infection. 2-AG is able to ‘plug’ this receptor, preventing this cascade and helping the body to stave off infection, lead researcher and UTSW professor Vanessa Sperandio, PhD, explained.

Sperandio believes that these findings could extend to explain some of the positive effects seen in inflammatory bowel conditions after using cannabis. While other research has tied these effects to the anti-inflammatory properties of some plant cannabinoids, Sperandio notes that other recent research has also indicated that these conditions tend to have a bacterial component to them too, and that this could also be being affected by the presence of the cannabinoids.

“By harnessing the power of natural compounds produced in the body and in plants, we may eventually treat infections in a whole new way,” Sperandio said in a statement.

One crucial avenue where this could be helpful could be in the treatment of enterohemorrhagic E coli in humans. When exposed to antibiotics, this pathogen begins to excrete deadly toxin, making conventional treatments obsolete and even harmful. Creating a treatment based around blocking the QseC receptor could provide an alternative avenue for care that would mitigate this risk.

Previous Article Recipe: How to make cannabis chocolate chip cookies Next Article Jewish pirates, hash stuffed in camels, and ‘reefer madness’ in Israel
The Cannigma uses cookies to improve your experience and to show you personalized adsACCEPTPrivacy Policy
Manage consent