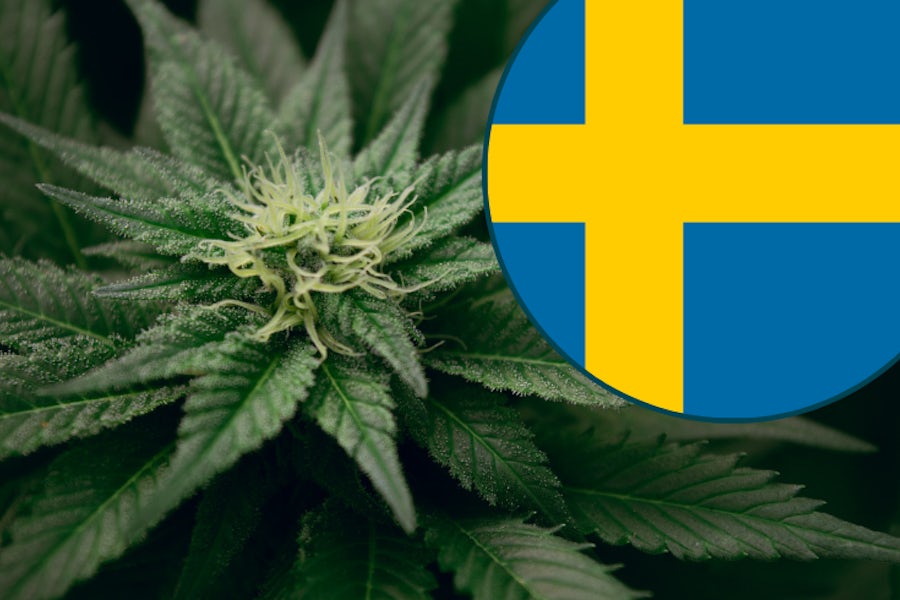 Sweden legalized medical marijuana in 2012 but the program is highly restrictive and the Scandinavian country has yet to legalize recreational marijuana.

In addition, Sweden has some of the strictest policies regarding CBD. In 2019, the country’s Supreme Court ruled that CBD oil containing any THC is a narcotic preparation and falls under the country’s narcotic control laws.

Also, while the country did legalize the use of cannabis for medical reasons in 2012, it was only five years later that the country approved two licenses for patients to use a type of low THC cannabis flower supplied by Dutch cannabis provider Bedrocan. Prior to that, the only formulations approved were the cannabis-derived medications Dronabinol and Sativex.

Under Sweden’s Act on Penal Law on Narcotics (1968:64) anyone who “unlawfully transfers narcotics” or “possesses, uses, or otherwise handles narcotics shall, if he has acted wilfully, be sentenced for a narcotic drug offence to imprisonment for not more than three years.” For minor drug offenses though, such as possession of cannabis, the penalty can include fines or up to six months imprisonment.

In 2017, the country’s Supreme Court ruled that growing medical marijuana is a minor drug offense.

How do Swedes generally view marijuana?

Sweden is typically seen as a progressive European country, but not when it comes to marijuana or to drugs in general. The government has adopted a zero tolerance strategy regarding drugs, and the Ministry of Health and Social Affairs has stated that “all countries should treat cannabis as a dangerous substance,” in order to comply with the UN convention on drugs. The ministry also has stated that cannabis “can cause psychological illnesses such as psychoses, hallucinations, depressions, etc. in both the long and short term.”

The country’s approach to drugs “focuses more on minor drug violations such as consumption and possession of small quantities,” than the policies of the other Nordic countries, according to a 2019 report by the Nordic Welfare Centre.

And when it comes to the public, a poll carried out in 2018 found that 83 percent of Swedes oppose cannabis legalization.

Despite Sweden’s harsh weed laws, things might be changing on the ground somewhat. A 2014 report found that cannabis use is now higher in Sweden than in Portugal, which decriminalized drug possession in 2001.

In addition, a 2021 study determined that “there is a widening of the debate on cannabis in the Swedish public sphere, giving more recognition to the potential medical use of cannabis.”

Though Sweden did approve medical marijuana in 2012, it has been a difficult and complicated road forward over the past decade. Only five years later did the country’s Medical Products Agency approve the use of medical cannabis for two local patients.

The flower approved for use was low THC only, and the government decision followed a long, drawn out struggle.

In 2019, the Swedish medical journal Läkartidningen reported that the use of medical cannabis in Sweden has “more than doubled” over the previous three years, from 168 in 2016 to 395 in 2018. The journal reported that the number of licenses for treatment with non-approved cannabis preparations has increased from 8 in 2016 to 63 in 2018.

In February, 2021, a new form of 1:1 THC-CBD oil by Emerald Health Therapeutics was approved and reached the Swedish medical cannabis market.

Who qualifies for medical cannabis in Sweden?

In Sweden, cannabis preparations like Sativex and Marinol can be prescribed by a licensed physician, but cannabis flower must be approved on a case-by-case basis by the Swedish Medical Products Agency.

Cannabis cultivation is illegal in Sweden even if you are a medical cannabis patient, though the Supreme Court has ruled that cultivation for personal use is a minor drug offense.

Visiting Sweden – can you buy or bring marijuana products?

It is not permitted to bring cannabis into Sweden and the country will not recognize a medical cannabis prescription from a separate jurisdiction or allow the use or transport of cannabis covered under the license.

How to How to tell if your cannabis is laced
Previous Article THC detox: how to pass a drug a test Next Article Is weed legal in India?
The Cannigma uses cookies to improve your experience and to show you personalized adsACCEPTPrivacy Policy
Manage consent