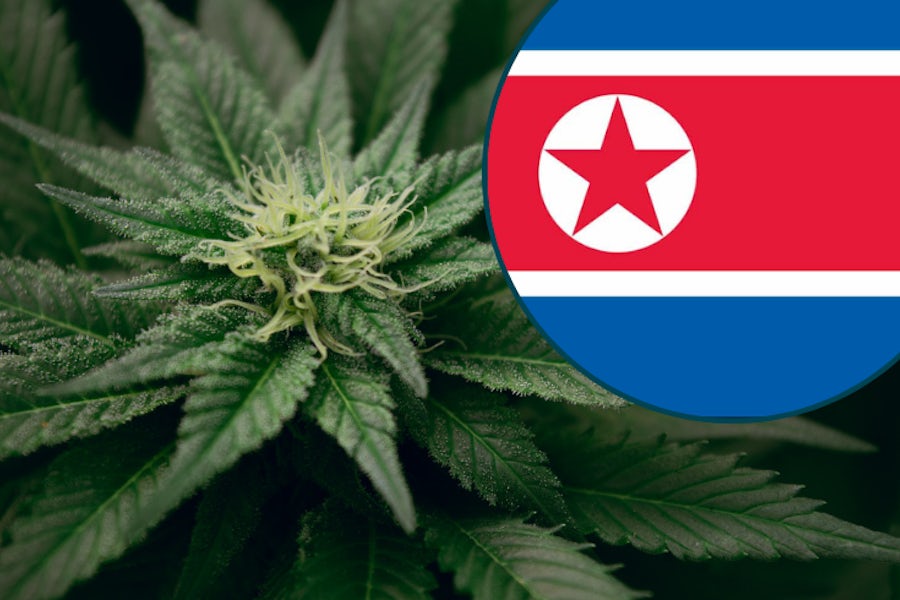 For years, rumors have been swirling around the internet that cannabis is not only legal in North Korea, but ridiculously cheap. The adage “don’t believe everything you read on the internet,” seems to hold true for the rumors, which appear to have been sparked by foreigners buying hemp, sold as a cheap alternative to tobacco.

On the other hand, Radio Free Asia has repeatedly reported that marijuana is commonly used in North Korea and widely grown within the state. However no one can be certain, as it is near impossible to gain accurate information about the laws and how they are applied within the ‘hermit state.”

In 2017, Torkel Stiernlof, the Swedish ambassador, told the Associated Press: “There should be no doubt that drugs, including marijuana, are illegal here. One can’t buy it legally and it would be a criminal offense to smoke it.”

Why are there rumors that weed is legal in North Korea?

Although North Korea is notoriously closed off from the world, a few intrepid westerners have managed to visit the country. Visitors have to be accompanied by state guides who tend to only allow them to see the parts of the country the government permits, yet a few have managed to glimpse the ‘real’ North Korea, and while there, have noticed that locals appear to buy and smoke weed freely.

In 2013, an anonymous blogger wrote of his experiences visiting Rason, a Special Economic Zone in North Korea’s northeast, near the border with China and Russia. There he visited the market, normally off-limits to foreigners, where he found a stall piled high with “a veritable mountain of dried cannabis plants”. He and others in his group bought plastic shopping bags full of the dried plant for the equivalent of about $0.70, and proceeded to smoke the substance freely throughout the rest of their trip.

In the same year, NK News published an article (since removed) describing North Korea as “a weed-smoker’s paradise.” They reported: “NK NEWS receives regular reports from visitors returning from North Korea, who tell us of marijuana plants growing freely along the roadsides, from the northern port town of Chongjin, right down to the streets of Pyongyang, where it is smoked freely and its sweet scent often catches your nostrils unannounced.”

The article was later republished by Vice.

A few years later, the US government-funded Radio Free Asia reported that Chinese and Russian tourists were regularly loading up on cheap weed at Rason.

But not everyone is convinced. Gareth Johnson, founder of Young Pioneer Tours which specializes in travel to obscure places including North Korea, has an alternative theory on what these tourists are finding in Rason:

“At the private markets it’s possible to buy loose tobacco for cigarette rolling. One of the varieties available is hemp tobacco, which is known as ‘poor man’s tobacco’ and is utterly unable to get you high. So whilst it’s true that you can buy and smoke ‘hemp’, it’s not cannabis. So is weed legal in North Korea? No, it’s not.”

Both the anonymous blogger and the NK News report noted that the quality of the weed was poor. As the blogger put it: “I believe the substance we smoked in Rason market that day was probably not so much weak weed as feral hemp. An un-policed roadside herb rather than an illegally cultivated drug, but with a THC content, in my opinion, closer to “low” than to “negligible.”

What are the penalties for illegal drug use in North Korea?

As a totalitarian state, punishments for all illegal activities are harsh in North Korea, ranging from years in a work prison to execution by firing squad.

Foreigners, including American citizens, caught violating laws in North Korea have been on the receiving end of harsh prison sentences for misdemeanors as seemingly mild as leaving a Bible in a public area. With no diplomatic relations between the nations, it is near impossible for western governments to intervene on behalf of their citizens. Steirnlof says drugs laws are no different, and any foreigner caught breaking the law should “expect no leniency whatsoever.”

But it is not clear whether these rules apply to weed use, as North Korea’s laws aren’t published outside of the country.

Is marijuana used for medical purposes in North Korea?

Some visitors to the country report that locals grow marijuana in their gardens for medicinal use. One Reddit user who had visited North Korea numerous times wrote: “We came to a garden one day and took one look and said, ‘that is weed!’ We went over and sure enough they were growing marijuana. I had heard it is used for medicine but finding it was interesting.”

Meanwhile, in its 2010 report, Open Radio noted that “Many gardeners grow opium in their own gardens to be used as a treatment for colitis or diarrhea,” suggesting that there is a culture of growing medicinal plants for personal use in North Korea.

Given the informality of personal cultivation of plants for medicinal purposes, and the overall levels of poverty in North Korea, it is unlikely that refined products such as CBD oils are widely available, but, as ever with North Korea, it is almost impossible for outsiders to be definitively sure.

Previous Article How to make cannaflour Next Article Minorities in cannabis, with Steven Philpott Jr.
The Cannigma uses cookies to improve your experience and to show you personalized adsACCEPTPrivacy Policy
Manage consent