Can you really snort cannabis? 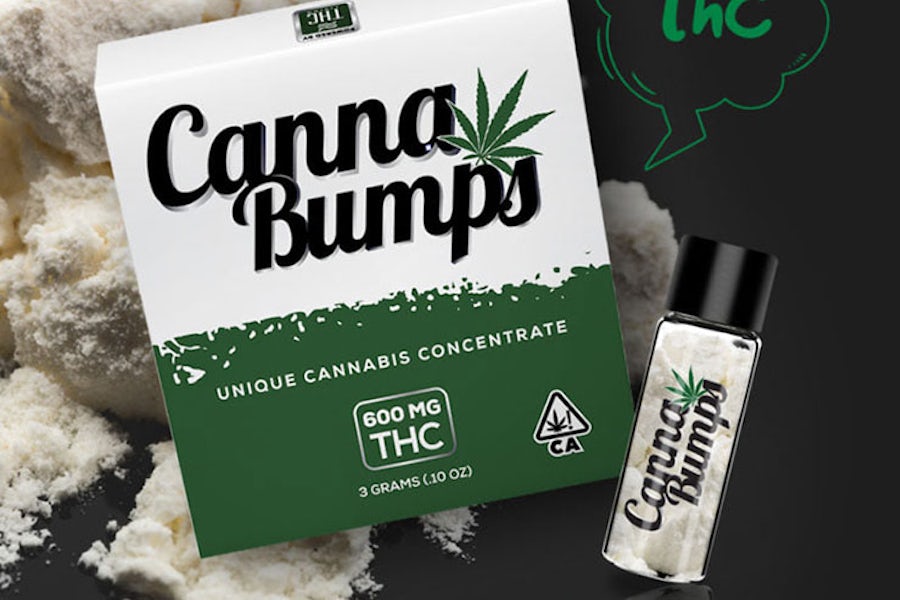 The reaction on social media from cannabis fans and the cannabis industry was swift and brutal. (Courtesy)

The scientists were so preoccupied with whether or not they could, they didn’t stop to think if they should. This line from “Jurassic Park” may come to mind when you hear the words “snortable cannabis,” but it’s perhaps not quite the horror show you may think.

It was billed as a “unique cannabis concentrate,” and that may be putting it lightly. The ad for “Canna Bumps” released this past week showed a glass vial with 3 grams of powder, containing 600 mg of THC. The vial and the included card and spoon — even the word “bumps” — all scream a very different plant-based product, and that just might be on purpose.

The reaction on social media from cannabis fans and the cannabis industry was swift and brutal, and according to Leafly, THC Living decided to cancel the product virtually overnight.

But while the marketing may be bound to shock, and the product could bolster critics of the legal cannabis industry, there could be a few valid reasons somebody thought about marketing snortable cannabis: Rapid onset, high bioavailability, and a method that could — in theory — be great for sharing with friends.

With people looking for more and more novel intake methods as cannabis seeps further into the mainstream, snortable cannabis may one day find its place at the table.

One relatively well known form of snortable cannabis, albeit with a more palatable name, is nasal spray, often for medical purposes. Take for instance the Cannatol Rescue nasal spray, which delivers 5mg of THC per dose and is meant to be used for emergency treatment of acute seizure activity.

Another example is the Nasal Mist made by Verra Wellness, which contains a 10:1 THC:CBD formulation. In an interview with Vice, Verra Wellness co-founder Paul Johnson argued that transmucosal delivery of cannabinoids is safer than inhaling cannabis smoke.

What exactly is powdered cannabis?

When it comes to snorting drugs, cannabis is typically not what people think of. But, technically anything that you can inhale through your nasal cavity is snortable, and the method is commonly used for other drugs.

In recent years, there have been significant advances in powdered cannabis formulations, but not of the nasal variety.

“Dissolvable cannabinoids” are having a moment.

Ultimately, one could snort any cannabinoid powder or create their own infused powder like canna sugar and ingest it nasally. One could even decide to dump out their grinder and snort some kief if they were so inclined, but considering that it hasn’t been decarboxylated, it probably wouldn’t do anything but make your nasal cavity hurt.

Does snorted cannabis make it to your bloodstream?

As far as we can tell, there is zero research into the effects or efficacy of snorting cannabis powders or extracts of any sort.

That said, research has shown that many drugs (but not necessarily cannabis) have better bioavailability when administered by the nasal route, both because of the highly permeable structure of the nasal mucosa and the fact that it avoids the GI tract and liver.

The same study mentioned above indicated that nasal drug delivery (snorting, if you must) can be useful for drugs that have a low oral bioavailability. There are a number of drawbacks of nasally administered drugs, however, including poor membrane penetration, nasal irritation, and other challenges presented to the nasal cavity.

Insufflation (the science-word for snorting powder) typically has a much quicker absorption rate and onset time for various types of drugs when compared to oral or even sublingual consumption. Importantly, most of the existing studies on pharmaceuticals were using liquid sprays, not powders like the new product proposed to the market.

Why would you want to snort weed?

With so many easy, time-tested intake methods for cannabis, why bother snorting it? Arguably, one would snort cannabis products for the same reasons they would snort any other substance.

When snorting substances, they are absorbed through the nasal tissues and enter directly into the bloodstream, creating an effect that is felt almost instantly. For people who don’t want to wait for edibles to kick in and can’t or don’t want to smoke, this could be a reason to snort cannabis.

This may be a bit of a double-edged sword. On the one hand, snorting cannabis would produce no smoke to alert people that you are smoking cannabis, and won’t leave the smell of smoke on your clothes and hair. On the other hand, being seen snorting lines or taking “bumps” of powder — any sort of powder — is typically much less socially acceptable than smoking a joint or pulling on a vaporizer.

Pulling out a vial of white, snortable cannabis powder could potentially alienate some people. Those with an aversion to hard drugs could recoil from the display, while those who are fans may be confused if not outright angry. Regardless, snortable cannabis could be a conversation starter or a funny party trick, and a unique, albeit strange, way for friends to share cannabis.

What are some snortable cannabis products?

Following the grand opening and near-instant grand closing of Canna Bumps, the market is virtually bereft of cannabis products that are meant to be snorted — and we’re totally okay with that.

The options left on the market are more or less the Verra Wellness nasal spray or medically prescribed rescue nasal sprays. Snorting dissolvable cannabis powders is still on the table. But we wouldn’t recommend putting cannabis up your nose when we know it works exceptionally via the lungs.

Could this change in the near future? Snorting will always evoke hard drugs for many consumers, and brands looking to battle the stigma that still surrounds cannabis and cannabis users are likely to not see the benefit in marketing products that send the wrong message.

But the cannabis industry is nothing if not innovative, and new options in nasal sprays and other snortables may be on the horizon soon.

Previous Article Can cannabis help COVID ‘long haulers?’ Next Article What is Delta-8-THC? Is it safe?
The Cannigma uses cookies to improve your experience and to show you personalized adsACCEPTPrivacy Policy
Manage consent