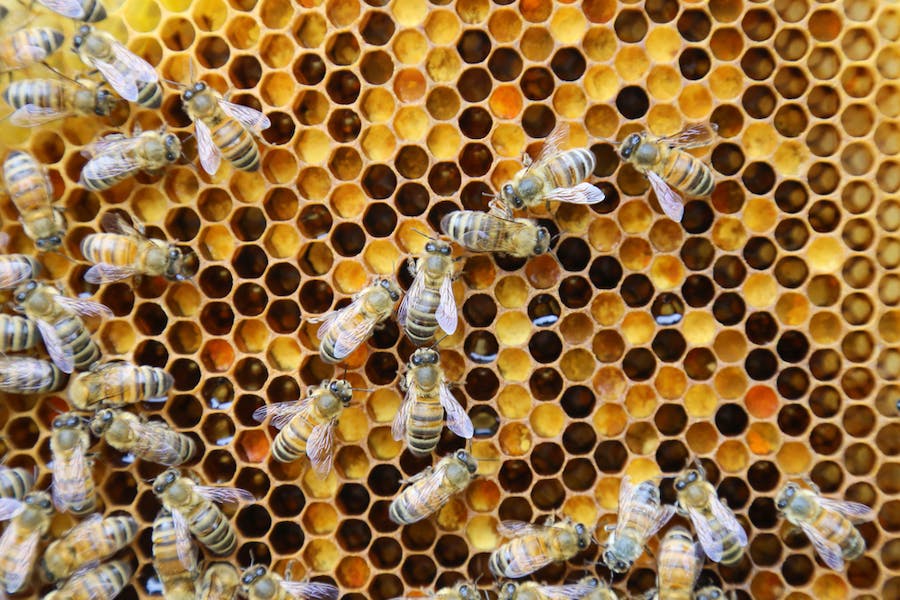 What would happen if a bee were fed CBD-infused nectar? Super potent CBD honey, of course. (Shutterstock)

This article was first published on Analytical Cannabis. It is republished here with permission.

Most of us don’t really think of honey as a plant product. After all, it’s harvested from bees, not crops. But, of course, the nectar the bees use to make the honey is from flowering plants. Which raises the question, can that initial plant affect the eventual honey? In other words, can the unique chemicals found in the nectar in turn create a unique jar of honey? Well, yes.

Beekeepers across the ages have noticed differences in flavor between honeys that were derived from different plants. Bees that gather their nectar from lavender flowers, for instance, will produce honey said to very fragrant, while the honey produced from avocado plants is considered quite buttery.

So, what would happen if a bee were fed CBD-infused nectar? Would it produce CBD-infused honey? Given the explosion of the global CBD sector in the past few years, it was only a matter of time before someone tested this idea. And that person was Ilan Ben Simon.

“I stumbled into a story that says that everything that bees are producing honey from will be multiplied in the characteristics of the honey,” he tells Analytical Cannabis. “So, basically I understood, without even trying to do it, it’s possible.”

Confident that his idea of cannabis-honey was plausible, Ben Simon began his own research. And that meant learning a lot about bees.

“What eventually I had to do is to understand more than anything bee behavior,” he says. “Once you understand the behavior and how and why they choose their food, you can utilize that and make them create, by choice, honey that will manifest cannabinoids.”

Luckily, Ben Simon wasn’t alone in this research endeavor. He reached out to Professor Dedi Meiri, head of the Cancer and Cannabinoid Research Lab at the Technion – Israel Institute of Technology, for guidance. And through this collaboration, a patented method of producing CBD-infused honey was born.

“The product is basically organic natural,” Ben Simon explains. “We are using a lot of fruit and vegetable juices to create a natural fructose nectar.”

Now, after co-founding the Israel-based company Bee-Fuse, Ben Simon’s secret solution of cannabinoids and nectar is being fed to hives of bees out in California. But apart from this contribution, the bulk of production is still down to the insects, who secrete the cannabis honey now sold all over the state.

And this honey is surprisingly potent, according to Ben Simon.

“But you can see [from] the repeating customers and their testimonials clearly that people are getting a strong effect from a third of a milligram,” he adds.

Intrigued by the rave reviews, Ben Simon and Professor Meiri are now investigating the honey’s bioavailability in the lab.

“It’s still a mystery why the bioavailability is so strong, but it’s a mystery that concludes to two options,” Ben Simon says. “One option is we have unknown molecules inside our honey, something new that mankind does not know until now. And maybe we’ll find it. It’s still under research. Professor Meiri is doing that for us.”

“And the other option, which is more likely the reason, is that when the bees are processing cannabinoids and simple sugars and glycoproteins, they are making a new molecule that contains the cannabinoids inside the glycoprotein and the blood brain barrier does not distinguish between both of them. It takes it as sugar. And this is why the penetration to the body so fast.”

Whatever the reason behind Bee-Fuse’s high bioavailability, it isn’t the only factor that sets the company apart from a standard honey company. Thanks to relative price of CBD products compared with the average jar of honey, Ben Simon and his colleagues can afford to make a few more ethical choices when it comes to raising bees.

“We took upon ourselves something called ethical beekeeping, which means we do not prevent them for swarming” he tells Analytical Cannabis. “Swarming, it’s one of the biggest contributions for nature. It means that the hive is so big, it splits into two. Half of the hive will go to nature to establish a new colony, and half of the hive will stay and continue to establish the colony again.”

“So, most beekeepers will kill the second bee before it’s even born to prevent that swarming because they’re going to lose bees,” he adds. “We do not do that. We lose half of our hives every year. Gladly, I’m happy about it. We can do it because the price of our honey justifies that. In our situation, we can be ethical and we can leave them, and we can let them be as nature designed them to be swarming and contributing to nature, which is a great part in our work.”

This article originally appeared in Analytical Cannabis’ Advances in Cannabis Extraction and Processing eBook in March 2021.

From research to regulations and analysis to agriculture, Leo's writing covers all the need-to-know news for the cannabis industry. He holds a bach...