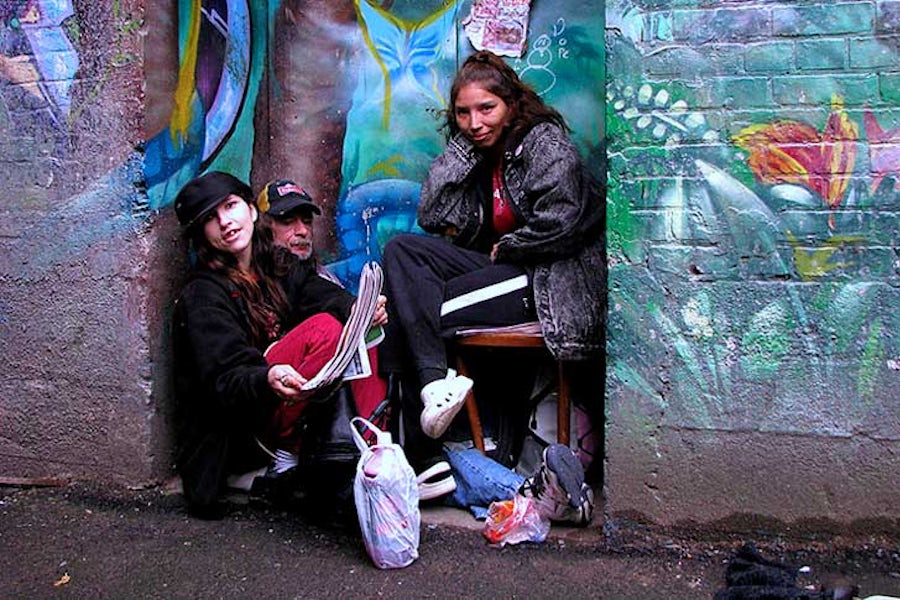 Crack cocaine addicts post for a photo after smoking crack in an alley in Vancouver, Canada. (Wikicommons/Author unknown)

While cannabidiol has shown potential effectiveness in treating a number of health conditions and even addictions, it is not an effective tool for the alleviation of crack cocaine withdrawal, according to a recent trial carried out in Brazil.

Each of the participants, all of whom had been diagnosed with crack cocaine dependence, was given 150mg of CBD twice a day — or a placebo — for 10 days, during which the researchers gauged their cravings for crack cocaine and the intensity of their symptoms.

What did they find after 10 days? “[D]espite excellent safety and tolerability, CBD failed to demonstrate efficacy in the treatment of craving in subjects with crack cocaine dependence.”

Craving levels dropped significantly for all participants during the 10-day, randomized control trial, the researchers wrote, but they observed no differences between the subjects given CBD and those who were provided with a placebo.

They also stated that they observed no differences in anxiety, depression, and sleep between the two groups.

The researchers used a variety of questionnaires including the 45-question Cocaine Craving Questionnaire, the Minnesota Cocaine Craving Scale, the Visual Analog Sleep Scales to self-rate their sleep, and the UKU Side Effects Rating Scale. The pills they provided were 99.9% pure CBD powder in gelatin capsules.

In order to induce cravings, they played a video showing places known for open drug use, as well as videos of people smoking crack, or handling and preparing the drug.

A potential limitation of the study is that the subjects all had been without crack cocaine for between eight and 30 days by the time the trial began. In addition, the short treatment period – only 10 days – and the relatively low CBD dosages used could be taken into consideration.

The researchers mention previous studies involving larger doses of CBD, including one that administered 400 or 800mg doses for three days and concluded that “CBD’s potential to reduce cue-induced craving and anxiety provides a strong basis for further investigation of this phytocananbinoid as a treatment option for opioid use disorder.” Another study mentioned by the researchers found that 400mg and 800mg doses of CBD “were safe and more efficacious than placebo at reducing cannabis use.”

The mean duration of crack cocaine use for the test subjects was 12 years, and most of them used it more than five times per week.

So why did the researchers think CBD might be a potential treatment for crack dependence in the first place?

As the researchers wrote, “different studies have suggested that agonists of cannabinoid CB1 receptors increase the discharge of dopaminergic neurons in the ventral tegmental area, which project to the nucleus accumbens, leading to an increase in extracellular dopamine levels in this structure.”

Or, in plain English, other studies have suggested that CBD can be helpful in addiction treatment and is involved in modulating mechanisms in the brain related to addiction and compulsive drug-seeking behaviors — maybe just not crack.

Another Brazilian study, carried out in 2015, looked the effects of combining crack cocaine and marijuana, and concluded that “combined use of cannabis as a strategy to reduce the effects of crack exhibited several significant advantages, particularly an improved quality of life, which “protected” users from the violence typical of the crack culture.”

The latter study included a conflict of interest statement pointing out that it was produced by the University of British Columbia, which has received unrestricted funding from a medical cannabis producer.

Though it wasn’t mentioned by the researchers, a 2006 study found that recovering cocaine addicts with ADHD who are moderate or occasional cannabis users “had greater retention rates compared to abstainers and consistent users.”

While this most recent study out of Brazil didn’t find that CBD could help alleviate crack cocaine withdrawal, there is evidence that cannabis can be effective in treating addiction.

A study published in May 2019 found that high doses of CBD helped patients coping with heroin withdrawal. They concluded that “CBD’s potential to reduce cue-induced craving and anxiety provides a strong basis for further investigation of this phytocannabinoid as a treatment option for opioid use disorder.”

And still other research found evidence that cannabis could help in treating tobacco and alcohol addiction.