With a role next to Michael Caine in a hollywood movie, and a pair of Nike sneakers named after it- it’s hard to deny the popularity of Strawberry Cough. This cannabis strain is also known for its mysterious origins, the smell of strawberries, and its mood lifting properties. 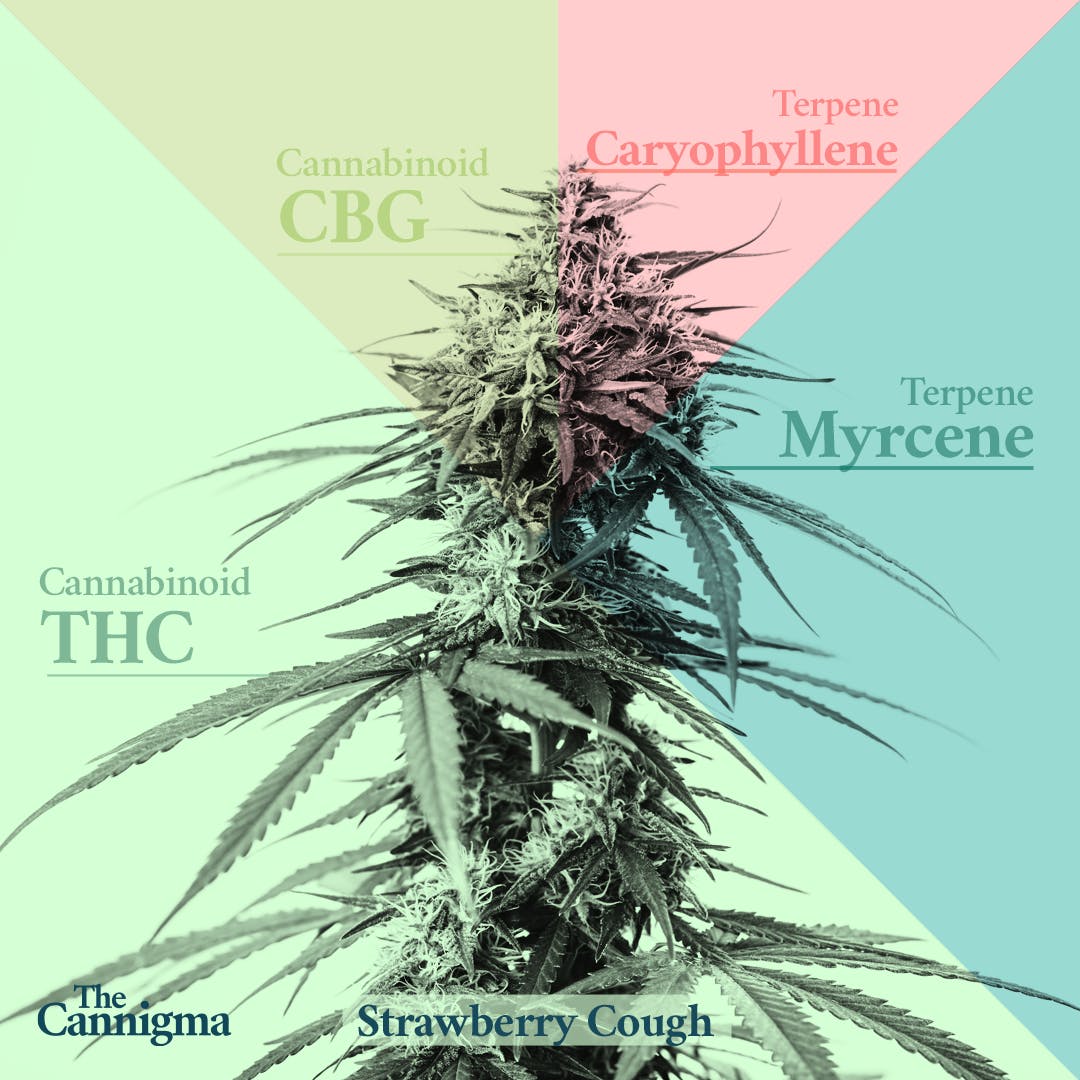 Strawberry cough is a real rockstar among cannabis chemovars, it had its own role (next to Michael Caine) in the 2006 movie Children of Men, and almost got a pair of Nike snickers named after it. As you can probably guess from its name, Strawberry Cough has a distinct and unique strawberry smell, and regardless of your experience, you’re bound to cough when smoking it. It’s reported to have an earthy and herbal aroma, and is also known for its mood-elevating properties.

The average THC level of Strawberry Cough is 16.5%, one reason for the variability in the chemical profile might be its mysterious origins. The development of the strain is often attributed to the award-winning cannabis cultivator, Kyle Kushman, but  there are plenty of stories circulating online about the lineage and origins of Strawberry Cough.

According to ILGM, this strain is a descendant of the original Haze strain, but the exact heritage is unclear, while Wikileaf claims that it’s a cross between Strawberry Fields and old-school staple Haze. According to Leafly Strawberry Fields is actually a descendent of Strawberry Cough and an “undisclosed indica Parent.” Another popular claim online is that it was originally grown in strawberry fields, but we couldn’t find any evidence for this.

The Origins of Strawberry Cough

The closest we got to the true story behind Kushman and Strawberry Cough, was in a 2017 interview with Kushman himself where he shared his version of the story:  “So many people think that I made the Strawberry Cough, and I’ve never ever told anybody that I did. I think the reason they think I made it is because I gave it out to so many people… When I moved to California from New York (in 2004), I traveled across the country with a trunk full of clones. I had several hundred clones. And I gave them out in cities all across the way to people I knew. And then of course they shared it with people and they said where did you get it? I got it from Kyle Kushman, so once thousands of people got it from Kyle Kushman it became the  KKSC (Kyle Kushman’s Strawberry Cough)”.

When it comes to the origins of Strawberry Cough, Kushman didn’t share the genetics or lineage of the chemovar, but rather said that: “It really came from a novice first-time accidental cross from a breeder in Bridgeport Connecticut.”

This breeder gave Kushman a clone, and he didn’t refuse just in order to be gracious and was actually going to dispose of it. But once he opened the bag he realized it “smelled like a pint of strawberries”. Excited by this new variety he never encountered before, he went on to cultivate it and produce more clones.

So for a while there were only cloned versions of the Strawberry Cough, probably only in North America. But according to Kushman, a few years later in a cannabis event, Henk van Dalen, the founder of Dutch Passion, approached him and asked for some of his genetics. Kushman wanted to give him clones but van Dalen insisted on seeds.

And so Kushman had to cross his KKSC in order to produce seeds (in the interview it’s somewhat implied that it was crossed with the Sweet Tooth strain), resulting in the Dutch passion version of Strawberry Cough. This seems to at least partially explain the different versions of Strawberry Cough we can see nowadays.

Is Strawberry Cough Indica or Sativa?

The Strawberry Cough strain is thought to be 80% sativa and 20% indica (sometimes 15-85), but this distinction is far from being scientifically based. Or in the words of Kushman himself in the documentary Weed: “When you have someone labeling something as 70% sativa, 70% indica, it’s 100% subjective. It’s done by somebody smoking it and deciding that they are getting either an indica or a sativa effect from it.”

Cannabinoids and terpenes in Strawberry Cough

Cannabis varieties such as Strawberry Cough are often referred to as strains or cultivars, but in fact the most accurate term would be “chemovars.” Strain refers to bacteria and viruses , and cultivars is an abbreviation of “cultivated variety,” one that has been intentionally created or selected and maintained by cultivation.

The THC content of Strawberry Cough varies but the average is 16.5. Talking about the chemical profile of a given cannabis variety can be tricky. There’s no standard definition for Strawberry Cough — or any other strain for that matter — from a chemical perspective. In theory any grower can cultivate any strain of cannabis with any kind of chemical profile, and name it however they wish.

For this report, we gathered Strawberry Cough’s chemical profile from a variety of third party certificates of analysis, seed banks and marijuana websites such as Wikileaf, Leafly and ILGM.

The following numbers can give you an estimation of what you could expect to find in products called “Strawberry Cough”, but your best bet is always going to be looking for a certificate of analysis before you choose a cannabis product — this way you’ll know for sure what’s in it.

The plants are relatively tall and can typically grow to a height of up to 78 inches (approximately two meters).

The flowering time of Strawberry Cough is reported to be 9-10 weeks. In outdoor cultivation, harvest time is mid October. Though pretty flexible when it comes to climate, it will thrive in a humid tropical environment.

A word to the wise: lookout for caterpillars. Apparently the little guys love Strawberry Cough.

Much like other weed strains Strawberry Cough’s origin is unclear, but, according to Cannabis Pharmacy,  some related strains are Lemon Haze, Lemon Thai, Sweet Tooth and Timewreck. According to Leafly, two of its children are Strawberry Satori and Strawberry Durban Diesel.