Can weed make you more creative? 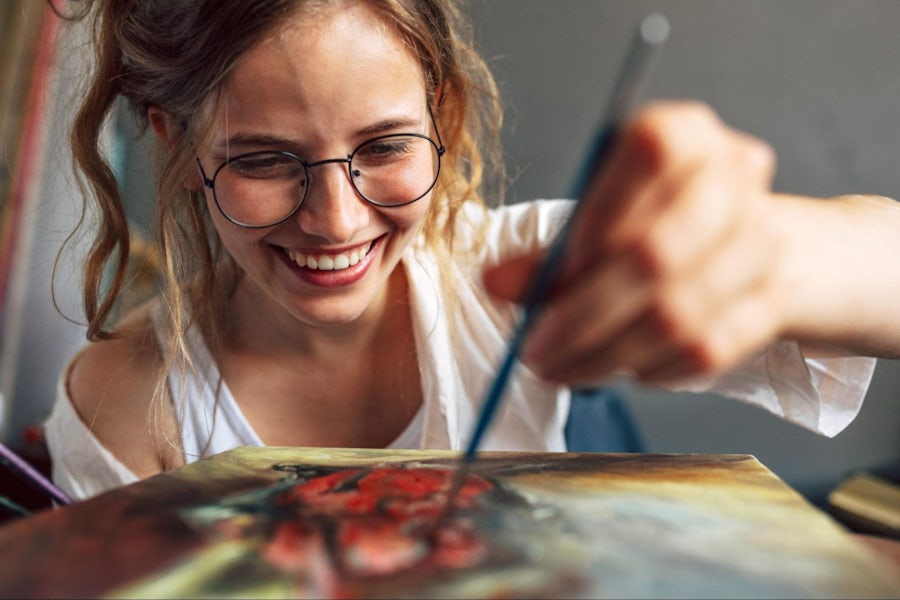 Cannabis can bolster creativity, but it depends on a wide variety of factors

Countless works of music and art show the sort of open-minded, vulnerable and imaginative mindset that many people associate with a positive and joyful cannabis high. But does cannabis actually help creativity, or is this just a marijuana myth?

You don’t need to rely solely on your own anecdotal evidence, the assertions of your guitar-playing cousin, or your old college roommate who wrote an entire zombie space opera thanks to an ounce of high grade weed. Instead, we can take a look at the research.

Marijuana may help with creativity – depending on who you are

There actually is a body of research carried out over the past decade or so that deals with cannabis and creativity. The findings are by no means black and white, and instead suggest that cannabis may be able to boost creativity for some people – depending on their preexisting level of creativity – but that in too high a dose cannabis can actually have the opposite effect.

In too high doses, cannabis can actually make you less creative, according to a 2014 randomized control trial.1 In the study, researchers gave “high” doses (22mg of THC) to 18 people and low doses of 5.5mg to 18 other participants. The ones given high doses performed significantly worse on tasks designed to gauge their divergent thinking, leading the researchers to conclude that “cannabis with low potency does not have any impact on creativity, while highly potent cannabis actually impairs divergent thinking.”

These findings mirror statements made by Dr. Lewis Nelson, chief of the division of medical toxicology at Rutgers New Jersey Medical School, in an interview with Mic in 2020.

“I can assure you that people who get a very high dose of THC won’t be creative. They’ll be very sleepy and very paranoid,” Nelson said, adding that “it makes sense that low-dose cannabis in the right population would increase creativity.”

Lewis also argued that “there’s kind of a plateau of creativity,” and that when it comes to people who are already creative, cannabis won’t make much of a difference, though it could help inspire people who are otherwise not creative.

This assertion has also been borne out by research carried out years before his interview.

A study from 2012 found that people with schizotypy (mild symptoms of schizophrenia) scored higher on tasks related to divergent thinking – regardless of if they did or did not use cannabis. This means that these individuals are more spontaneous, free-flowing, and generate ideas by exploring multiple options. People with naturally low creativity were the only ones in the study whose divergent thinking was helped by cannabis.2

There is also the possibility that cannabis doesn’t necessarily make people more creative, rather, people who are more used to outsider thinking may be more likely to use cannabis. A 2017 study found that cannabis users showed higher levels of self-reported high creativity and convergent thinking. This differs from divergent thinking by focusing on one single solution  that is most logical. However, the study concluded that the differences between cannabis users and non-users dissipated when factoring in “cannabis users’ higher levels of openness to experience.”3

A 2009 study on the influence of Cannabis and MDMA on creativity tested creativity on 15 sober cannabis users, 15 sober MDMA users, and 15 members of a control group. The researchers found that the cannabis users had significantly more “rare-creative” responses than the control population. At the same time, the cannabis users did not rate themselves as more creative in the self-report creative adjective checklist portion of the study.4

Cannabis and increased blood flow to the brain

A common side effect of cannabis is its ability to make your heart race – and also dilate blood vessels and increase blood flow. Could this potentially boost the blood flow to the parts of your brain that deal with creativity?

Research performed in 2002 looked at the effects of smoking marijuana on regional cerebral blood flow (rCBF) and found that it increased rCBF in the frontal lobe of marijuana smokers. The frontal lobe is believed to play5 a crucial role in creative thinking.

At the same time, a speedy heart rate and an overall more “alert” high could also potentially lead to anxiety and paranoia. Both of these are common side effects of cannabis, and can potentially stifle creativity as they make it more difficult to relax and let your mind flow free of stress and anxiety.

Dr. Alice Weaver Flaherty, a Harvard Medical School professor neurologist at Massachusetts General Hospital spoke in a 2017 interview about how artists “get into the zone,” and said that while cannabis could help some people relax and get into that zone, it could also have the opposite effect for creators who are already primed and ready to work.

“A very anxious creative person may get some benefit from cannabis. In calming them down, it could help their creativity. But for someone who’s already in the zone, and who’s not too anxious to work, it might push them into a place of being too laid back.”

According to the interview, Weaver Flaherty’s research has also found that highly creative people have more active frontal lobe than people with less creative abilities.

How set and setting can affect creativity

An often-overlooked aspect of cannabis and creativity – and cannabis in general – is the importance of set and setting.

The term set and setting is perhaps more closely associated with the use of psychedelics, and how the person’s mindset (“set”) and the physical and social surroundings (“setting”) can play a central role in determining if the person has a positive or negative experience.

The same holds true for cannabis, and arguably when it comes to whether or not cannabis can boost creativity. For instance, someone who is in a calm, relaxed mood at home in their studio or another familiar or comfortable place that encourages creativity, would probably have an easier time kicking back and letting their creative juices run wild. The inverse is also true – the combination of a stressful environment and an anxious or worried mind can stifle someone’s ability to relax or get “in the zone” for creative output.

The bottom line? Cannabis can bolster creativity, but it depends on a wide variety of factors, including the where, when, and how you consume marijuana – and who you are.

Plant What is CBGA?
Previous Article Do you trust your doctor about cannabis? Next Article Cannabis caramels recipe
The Cannigma uses cookies to improve your experience and to show you personalized adsACCEPTPrivacy Policy
Manage consent