How to make weed-infused popcorn 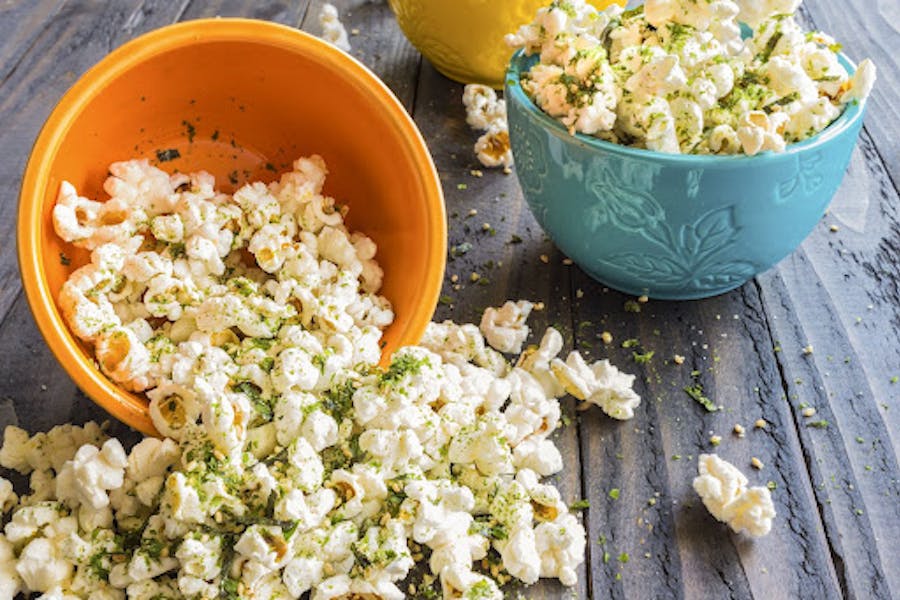 When you think of a delicious snack, something crunchy, savory, and bite-sized often comes to mind — and a popular choice is popcorn. Imagine it now seasoned with your favorite herb to let the hours fly by!

Adding marijuana to popcorn to make weed popcorn is easy and just as buttery delicious. By replacing traditional butter with cannabutter, you’ll be able to up your popcorn game and make the perfect munching snack for yourself or to share with others.

Cannabis edibles vs. other methods of taking weed

Because they can be infused in various everyday foods, taking weed edibles, including edible popcorn, can be a discreet way of consuming cannabis, unlike smoking or vaping.

Edibles are different from other forms of weed, as they need to pass through the digestive system before being absorbed and processed. This means it might take longer for you to feel the effects compared to other forms of weed and have a much more longer-lasting high. While you can purchase weed edibles in states where it is legal, there’s nothing more rewarding and fun than creating your own to try out.

If you haven’t tried cooking with cannabis before, it can sometimes be overwhelming to know where to start. When making weed popcorn, the star of the show is cannabutter — cannabis-infused butter that you can use for making all types of weed edibles, but in this case, it takes popcorn edibles to the next level.

Cannabutter is crucial for weed edibles. The effects and characteristic “high” of cannabis comes from cannabinoids, like THC and CBD. However, these compounds are fat-soluble and require fat to be properly broken down by the body. Cannabutter infused with weed takes up all the compounds in cannabis, including cannabinoids, flavonoids, and terpenes, to create a buttery mixture. Learn how to make cannabutter here.

When making weed edibles, it’s crucial to carry out the process of decarboxylation before adding weed to the recipe. Cannabis in its plant form contains cannabinoids, but these are not activated and will not produce the expected therapeutic effects. For the cannabinoids to be effectively absorbed and utilized by the body, the inactive forms of THC and CBD (THCA and CBDA) need to be activated by decarboxylation through heat and time.

An easy way to decarboxylate weed is to heat it, usually in an oven set to around 220-240 degrees Fahrenheit for about 30-45 minutes.

How much weed popcorn should you eat?

Taking edibles can be less regulated than other forms of cannabis since the exact amount eaten is hard to control. Absorption times are also slower, as cannabis has to be processed through the digestive system.

Weed has to enter the digestive system and get processed in the liver before entering the bloodstream, where you can then feel the effects. Usually, you can expect to start feeling high after an hour after eating edibles, but this can range from 30 to over 90 minutes, depending on your body composition and other factors.

The amount of weed popcorn you can eat also depends on your tolerance and preferences. You can adjust the amount of weed to put inside your cannabutter, depending on how strong you want your weed popcorn to be. We recommend starting off with a smaller amount than usual for the first batch and then adjusting for your preferences on further batches of weed-infused popcorn.

Recipe: how to make weed popcorn

You can adjust the quantities of ingredients based on your taste preferences. Note that ½ cup of uncooked corn kernels makes about 15 cups of weed popcorn. You can also choose whether you want to make your popcorn on the stovetop or in a popcorn maker.

Yield: 14 cups of popcorn (about 6 servings)
Cook time: 10-15 minutes (and about 4 hours for the cannabutter, but you can make it beforehand and keep it in the fridge)

Scientists weren’t able to kill monkeys with excessive amounts of THC. Here’s why this matters

How cannabis affects your liver

Products Dr. Dabber Boost EVO review: is this e-rig worth it?
Previous Article Data is knowledge with Otha Smith III Next Article How to make THC turkey and fried chicken
The Cannigma uses cookies to improve your experience and to show you personalized adsACCEPTPrivacy Policy
Manage consent