How telemedicine found its moment during the pandemic 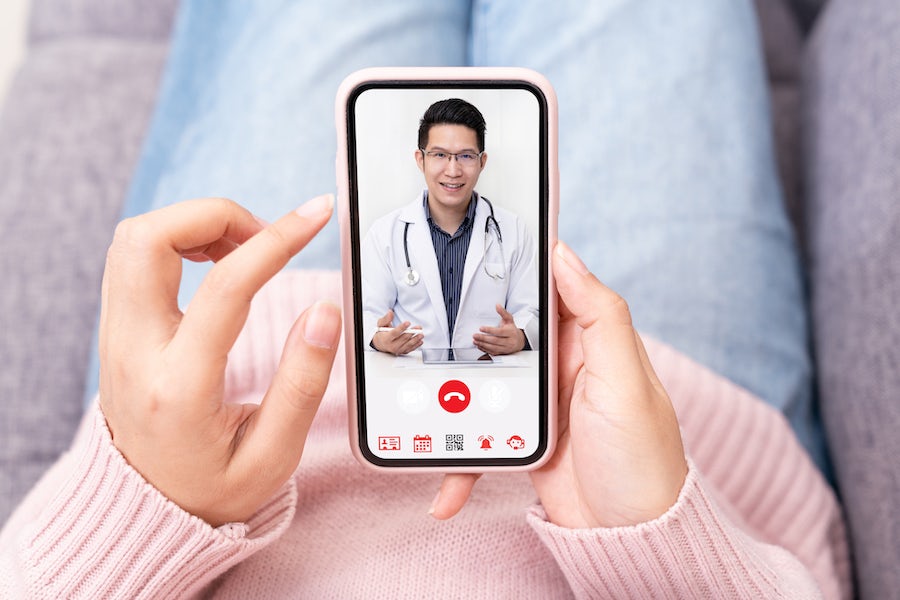 "People were slowly starting to adopt telemedicine anyway, but the pandemic spiked non-urgent telemedicine visits by over 4,000%." (Shutterstock)

Around the time the United States had its first confirmed case of COVID-19 in late January 2020, Greg Rovner, CEO of the telemedicine app Heally, got nervous. The company was still in a fundraising round, and everything around those first initial days of the pandemic was clouded in total uncertainty.

In early March, 2020 though, things started to change rapidly, and the company never looked back.

“I thought this was going to be a downward spiral but before I knew it, I was getting press interview requests left and right because we were in the telemedicine space and there was this buzz going on around telemedicine.”

When states around the country rolled out more permissive telemedicine rules, things really took off.

Rovner spoke to The Cannigma almost exactly a year after California Governor Gavin Newsom issued the first statewide stay at home order on March 19th. That order came only a week after Utah Jazz center Rudy Gobert tested positive for COVID-19, sending the NBA season into limbo, and eight days after Tom Hanks and Rita Wilson announced that they had contracted COVID-19 while on set in Australia. Those two events are often described as turning points, moments in which the pandemic began to hit home for Americans, and people realized things were going to be like nothing they’d ever experienced before.

In those early days of the pandemic, much of the company’s focus was on matching patients with physicians who could answer questions about COVID-19 and its symptoms, Rovner said. Reliable information was scarce at the time and many people did not want to go in person to a doctor’s office.

“It’s been very busy. People were slowly starting to adopt telemedicine anyway, but the pandemic spiked non-urgent telemedicine visits by over 4,000%, which is just huge. I think we tripled our revenue from what we were doing in January, February, to what we were doing in March, April, and May,” he said. (Disclosure: The Cannigma has an affiliate marketing relationship with Heally.)

When the pandemic hit, the company was already in a position to expand into a number of states, and jumped at the opportunity when governors began lifting all types of pre-COVID restrictions, including those regarding telemedicine.

“Any state that was kind of teetering on whether or not they were going to allow telemedicine, a lot of states kind of switched over and said yes, telemedicine is logical, it makes sense,” he continued. “And so we were ready to start operating in those states the second that happened.”

The company went from having patient flow in nine states prior to COVID-19 to 25 states in a matter of weeks, and up to more than 35 a year later.

The world’s leading health authorities have all encouraged telehealth as a promising tool. According to the Centers for Disease Control and Prevention, telemedicine can have a positive impact on traditionally underserved populations, positively influence the doctor-patient relationship, and save billions of dollars in healthcare costs.

“People always need access, including in places where telemedicine was not allowed,” Rovner explained. “There aren’t cannabis doctors everywhere so communities that need cannabis, or disabled people or people who live in impoverished and remote areas also need access and by blocking telemedicine you’re actually limiting those peoples’ access.

And while that all might be logical in hindsight, Rovner said, “it took Covid to make it a real issue.”

In the early days of the pandemic, both the CDC and World Health Organization issued recommendations for using telemedicine in relation to COVID-19. In late February 2020 the WHO issued a series of recommendations on fighting the outbreak, including remotely evaluating suspected cases of COVID-19 disease to help curb its spread.

Also in March, 2020, a $8.3 billion emergency aid package passed by the US Congress included $500 million for supporting telehealth services, in addition to a waiver on certain medicare restrictions for telehealth.

When cannabis went from illegal to essential

The pandemic has encouraged more people to seek out medical marijuana cards, even in states where it is legal for all adults, because of special privileges afforded to patients. For instance in Massachusetts, which has legal adult use and medical cannabis, but only medical cannabis patients can receive cannabis deliveries, at least for now.

The stay at home orders issued by state and local authorities across the country included a warren of exceptions and emergency temporary measures, including an ease on telemedicine restrictions that would have otherwise required face-to-face patient doctor consultations at a time when social distancing was required by law.

“That was incredible. We went from illegal to essential,” Rovner said, describing how not only were dispensaries allowed to stay open but some recreational dispensaries joined medical cannabis programs to better serve their patient base.

“That added to the frenzy,” he said. “It’s part of what drove our growth, partnering with these dispensaries that all of a sudden had a very urgent need to connect to a doctor.”

Not just doctors. Meet your tele-budtender?

In addition, with many states suddenly allowing online cannabis orders, curbside pickup, and even deliveries, Heally saw a rush of retail cannabis operators reaching out to use its software.

“They deployed our software to connect their sales associates or their budtenders to their customers so they could talk about delivery or curbside pickup. That was kind of an interesting dynamic, it wasn’t just doctors that were shifting over, it was the retail side of our operations also moving in that direction.”

Part of the draw of telemedicine is that even if dispensaries are only allowed to perform curbside pickup or delivery, it still allows for consultation.

“Dispensaries want to consult people, people want to be consulted, and they don’t want to rush people in and out. That’s where this became important — giving you the ability to connect with video is super important.”

He described budtenders being able to show product labels to customers by way of the Heally app, or just speak to them by video, which “changes the experience. It’s virtual care.”

And while we may all start using Zoom a little less soon, and kids should hopefully only be going to school in person, Rovner is certain that after the past year, telemedicine is not going anywhere.

“They tried it, they saw that it makes sense, that it works, and it’s here to stay.”